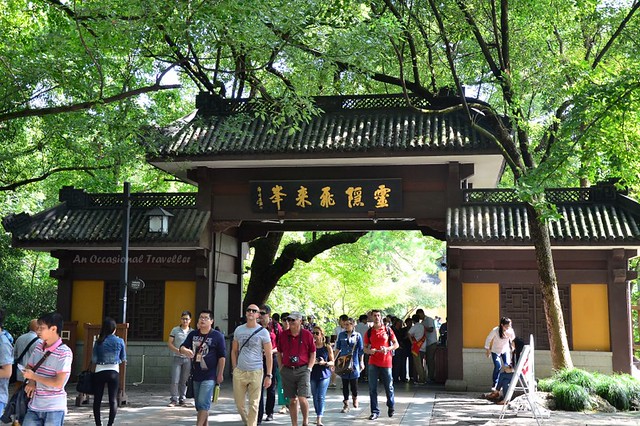 Fei Lai Feng (飞来峰) or The Peak Flown from Afar got its name from an Indian monk some 1,600 years ago.  This natural limestone mountain has many marvellous looking caves that house carvings of Buddha statues. 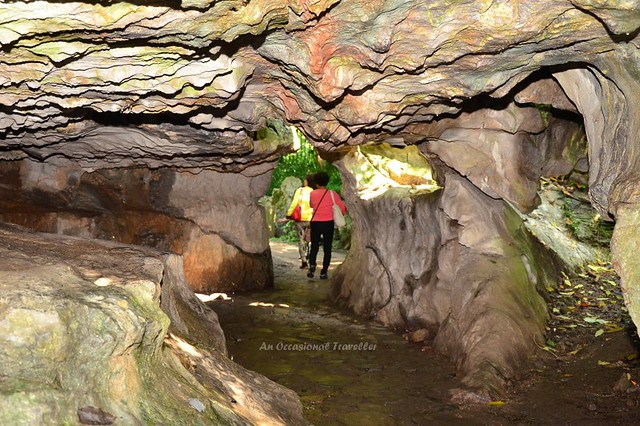 One of the limestone caves 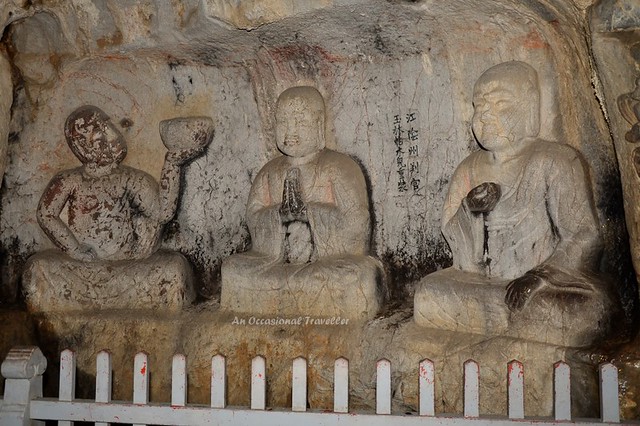 More than 300 stone statues of Buddha in various sizes and poses ranging from standing, to sitting, to sleeping are found at the grottoes.  These statues are carved during the Song and Yuan dynasties. 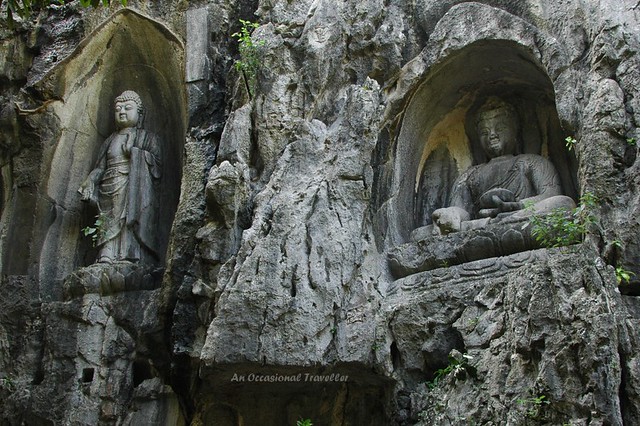 Some of the bigger Buddha statues 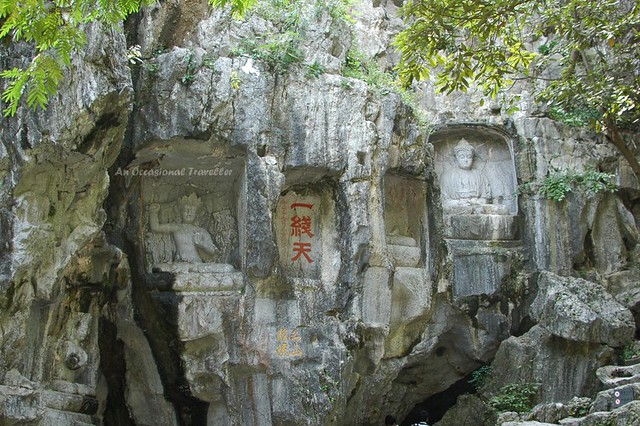 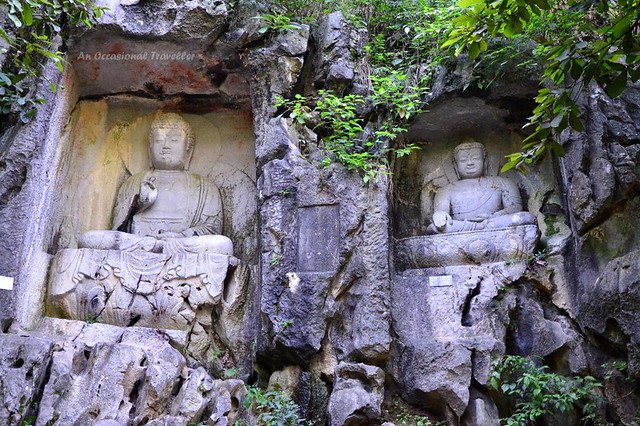 One of the larger statues is the well preserved Laughing Buddha with his big belly to keep all of the world’s troubles. 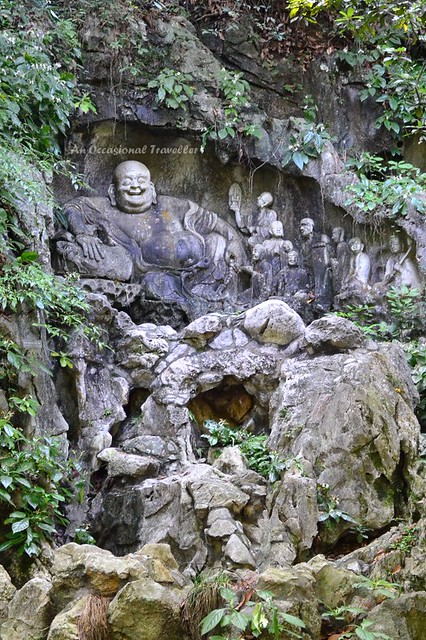 Next stop, Lingyin Temple (灵隐寺) which requires a different entrance fee of RMB30 per person.   Founded in 326AD (some said 328AD), this temple is one of the largest Buddhist temples in China.  It is also a significant Buddhist temple as it houses a collection of Buddhist scriptures and artifacts.

Once inside the temple compound, there are numerous buildings and halls housing sculptures of Buddhas.  A wooden statue of Shakyamuni sits in the main hall, the Hall of the Great Hero (大雄宝殿).  It is the largest sitting Buddha sculpture in China. 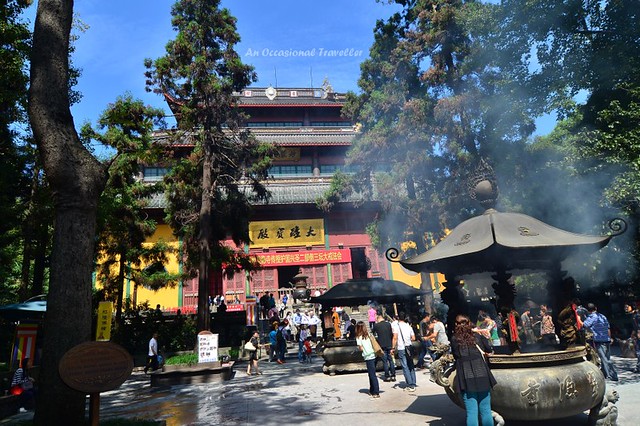 Groups of worshippers visit the temple everyday to pay homage. 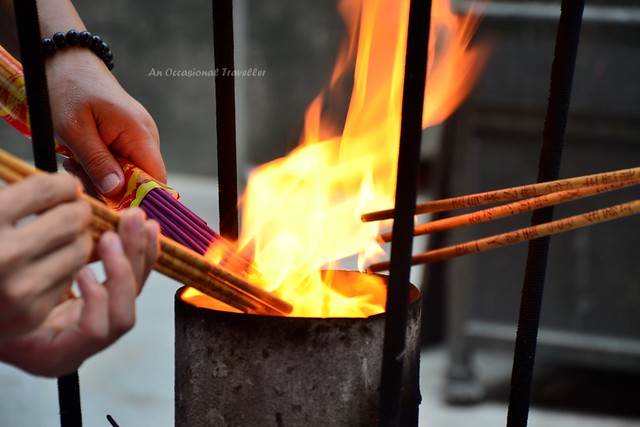 Worshippers burning incense at the temple 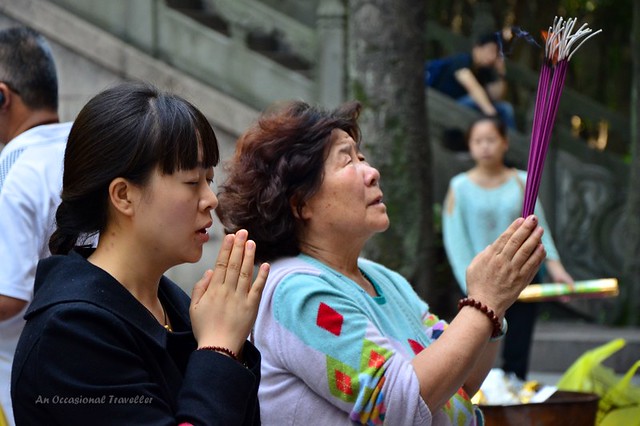 Worshippers are seen praying at the temple

Located behind the main hall is the Hall of the Medicine Buddha (药师殿) that houses a statue of the Bahisajyaguru Buddha. 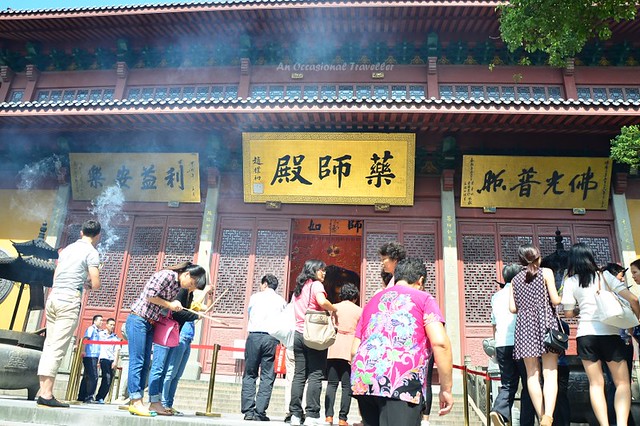 Hall of the Medicine Buddha (药师殿)

My mom, who visited 10 years ago, commented she saw some improvement and upgrade to the place like having a proper entrance, paved path lined with trees and more shops and eateries.  However she mentioned that in her previous visit, there was no entrance fee.  Well I guess they need the funds to maintain and preserve the place. 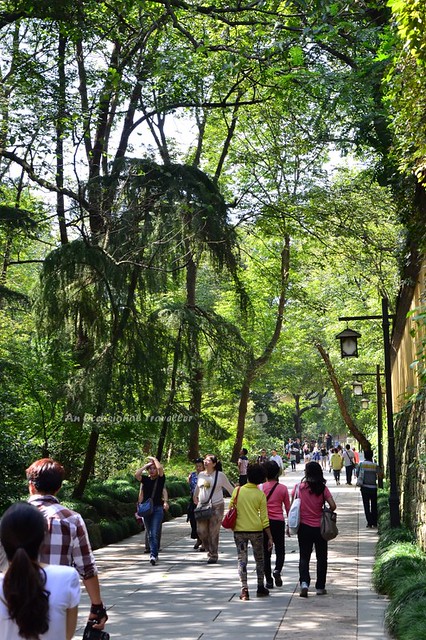 After a vegetarian lunch, we made our way to the Bei Gao Feng (北高峰) cable car station.  The return fare is RMB40. 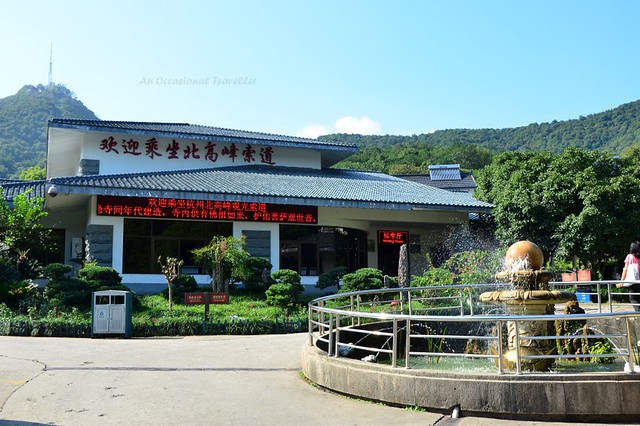 There is a small temple at the summit.  However an entrance fee is levied.  We decided to give it a miss. 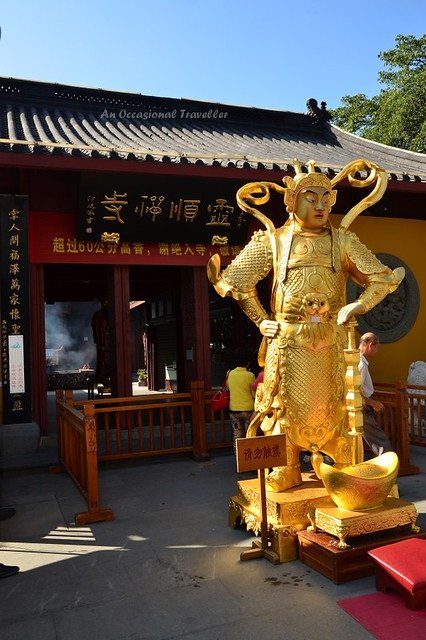 Also at the summit was a giant bronze bell.  One needs to pay to strike the bell for well-being, good health, good luck and more. 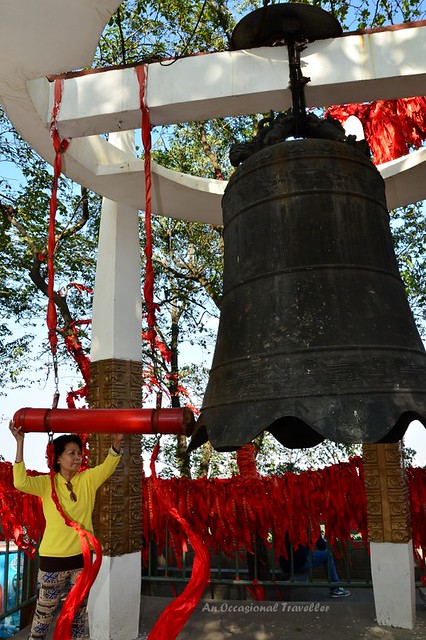 On a good clear day, one can get a good view of Hangzhou. 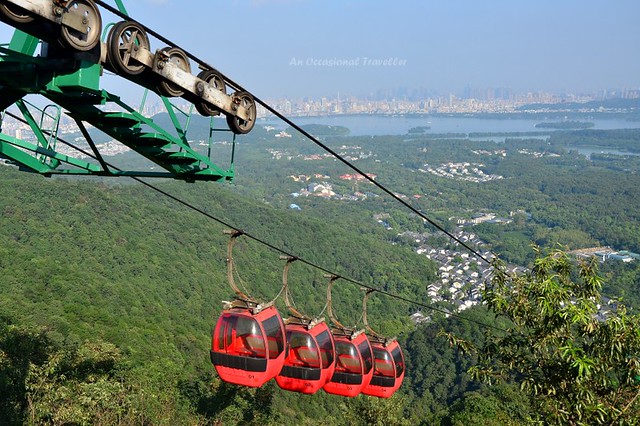 View of Hangzhou and the cable car we rode

We then took the same bus (but running in the opposite direction) to Yuewang Temple (岳王庙).  As we arrived too early until the West Lake Impression show, we visited the temple.  The temple was built during the Southern Song Dynasty to honour General Yue Fei (岳飞), a famous patriotic and loyal military leader.  He successfully defended the Southern Song against the invading Jurchen.  However he was later framed by Qin Kuai, (Prime Minister of Southern Song Dynasty) and was killed at age 39. 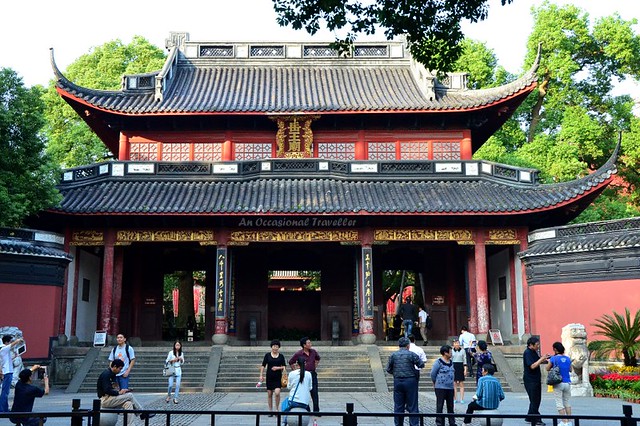 His statue sits in the Loyalty Temple (忠烈祠) with the inscription ‘Return us our country’ (还我河山) at the top.  His tomb is located on the right side of the hall. 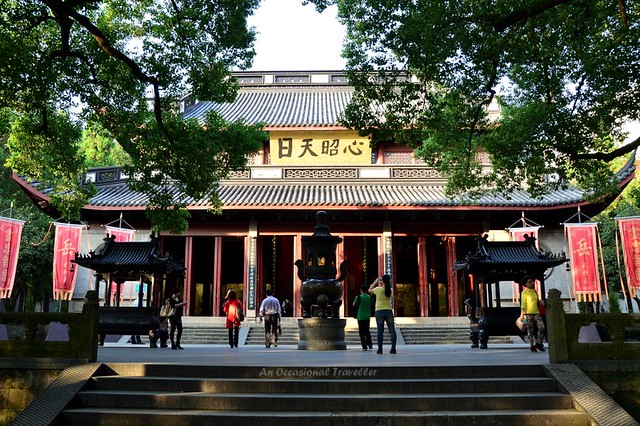 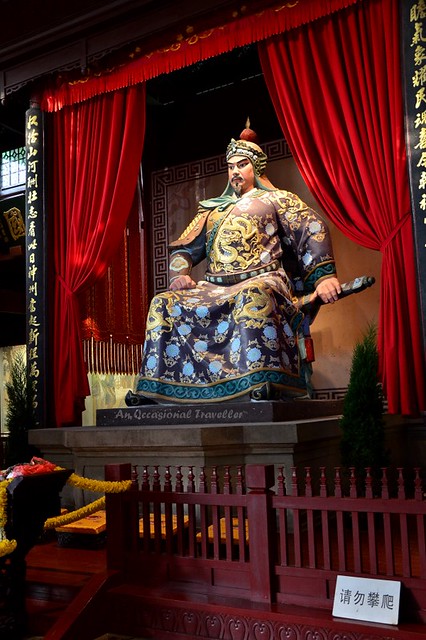 Statue of Yue Fei (岳飞) in the temple 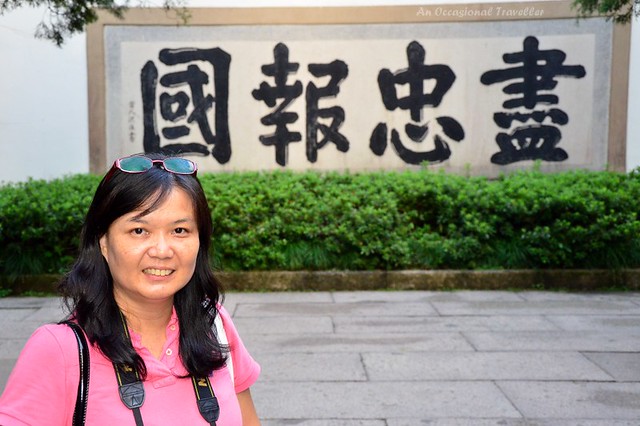 Another statue of Yue Fei is erected facing the Yue Lake (岳湖) which is also the venue for West Lake Impression Show.  More on this show in my next blog post. 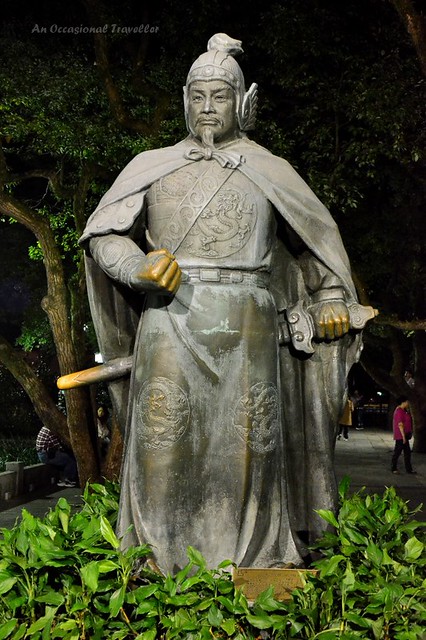