Apart from Kek Lok Si Temple, two other temples popular with visitors to Penang are Wat Chaiyamanglaram and Dhammikarama Burmese Temple.  Both temples are located opposite each other in Burmah Lane, Pulau Tikus making it convenient to visit both at the same time.

Wat Chaiyamangalaram, better known as the Reclining Buddha Temple is a Thai Buddhist temple.  The temple was built in 1845 by a Thai monk on a piece of land donated by Queen Victoria.  The temple was visited by King Bhumibol Adulyadej and Queen Sirikit in 1962. 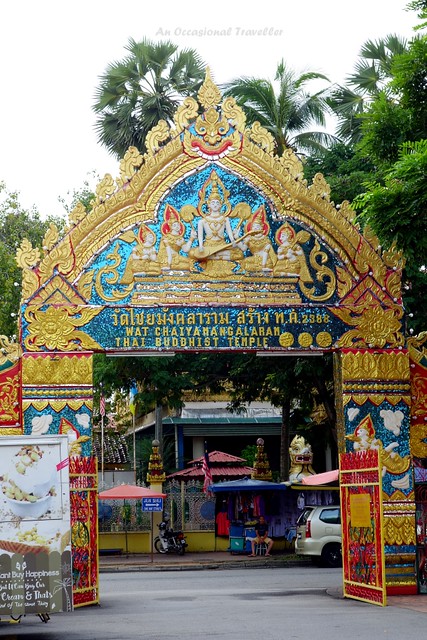 I first visited the temple in the 90s.  Since then, the temple has been spruced up and new buildings have been added.  As we were early, the temple was relatively quiet. 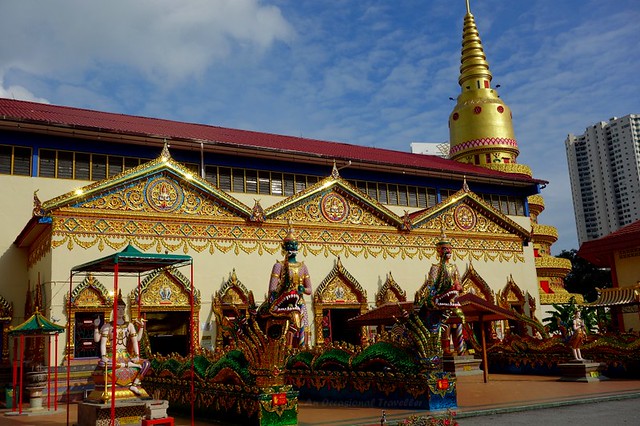 The main temple building is guarded by a pair of dragons on the left and a pair of seven heads serpent on the right.  At the entrance, one is greeted by two tall Deva statue guarding the temple.  Visitors have to take off their shoes to enter the main prayer hall. 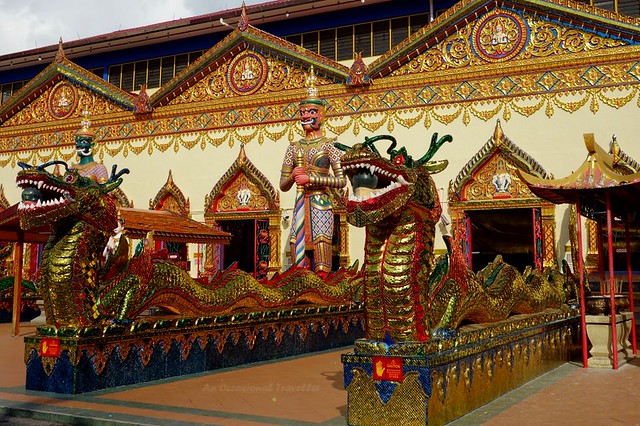 A pair of dragons guarding the main temple entrance 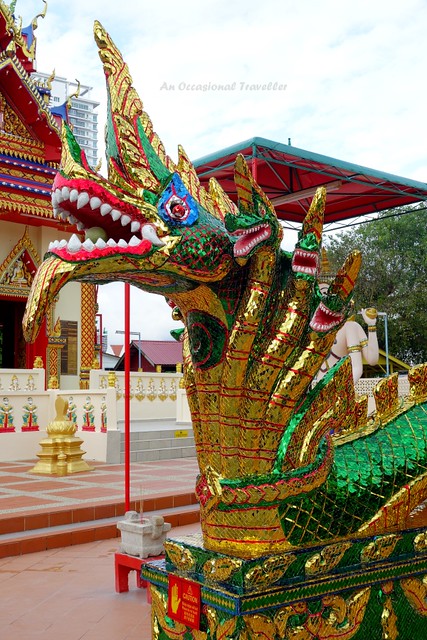 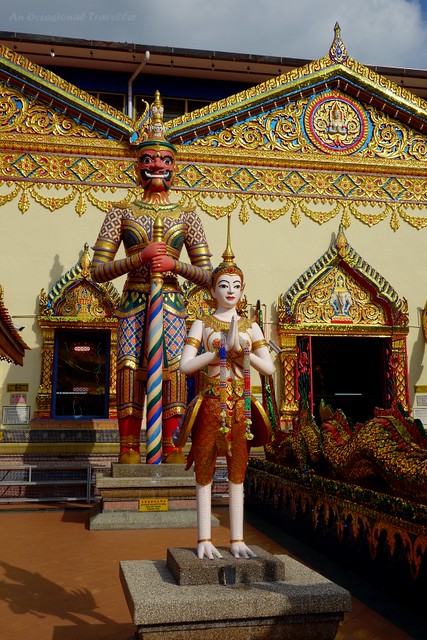 Inside the main prayer hall lies the magnificent 33 metres (108 feet) long gold plated statue of Reclining Buddha.  Lying on his right side with his right hand supporting his head and a serene smile, Buddha is preparing to enter Nirvana. 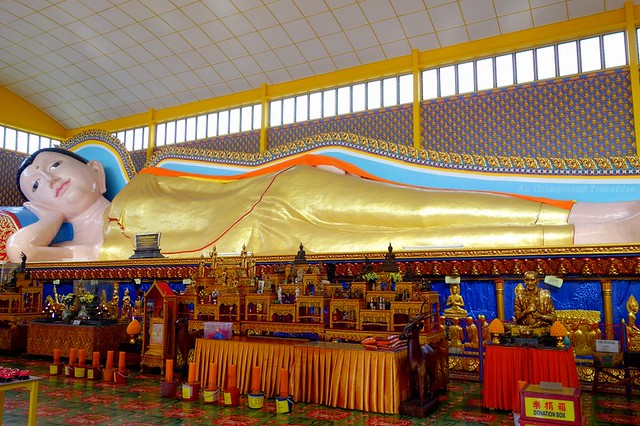 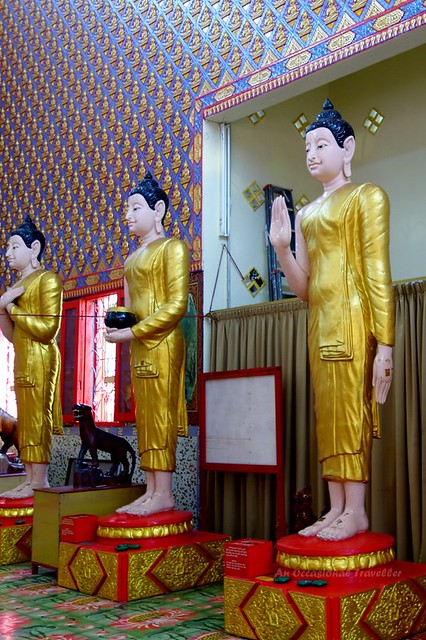 Buddha in various poses inside the main hall 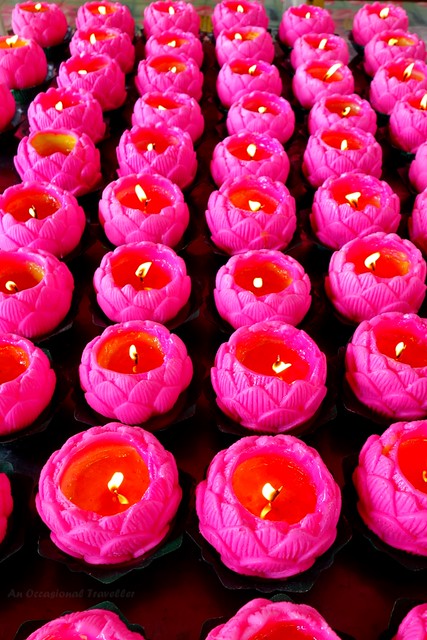 Other shrines can be found within the temple complex housing other deities such as the Goddess of Mercy and Four Face Buddha.  At the back of the temple, a large pagoda houses a separate columbarium. 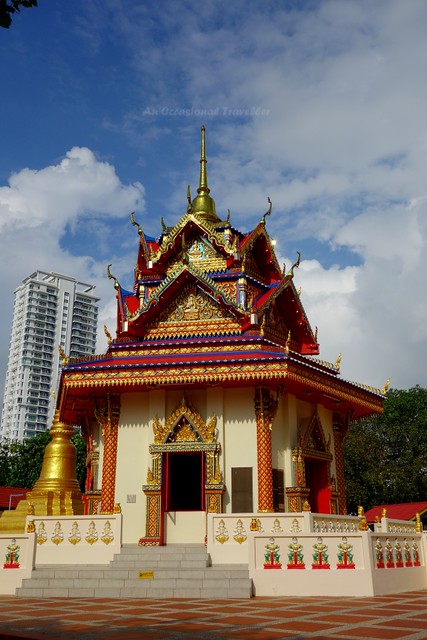 A shrine at Wat Chaiyamangalaram 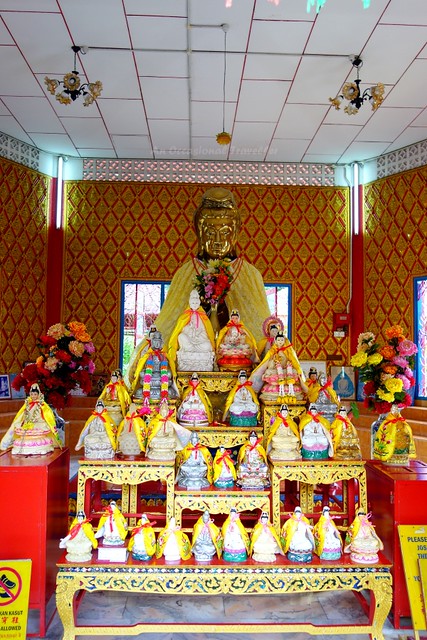 By the time we left the temple, it was getting crowded with tourists and the car park started to fill up with tour buses and vans.

Next stop, Dhammikarama Burmese Temple across the road.  Built in 1803 on a piece of land donated by a woman patron, Nyonya Betong, it is the first Buddhist temple to be built in Penang. 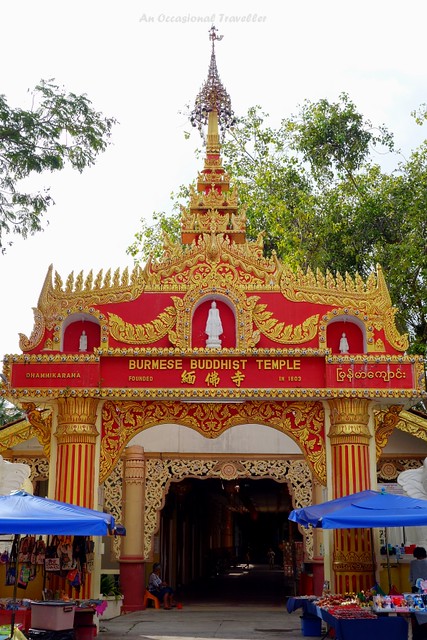 A long covered walkway leads to the rear shrine.  Paintings depicting the story of the birth of Buddha as Prince Siddharta Gautama and his journey to attaining enlightenment lined the walkway.  Beggars were seen along the walkway but they don’t harass you. 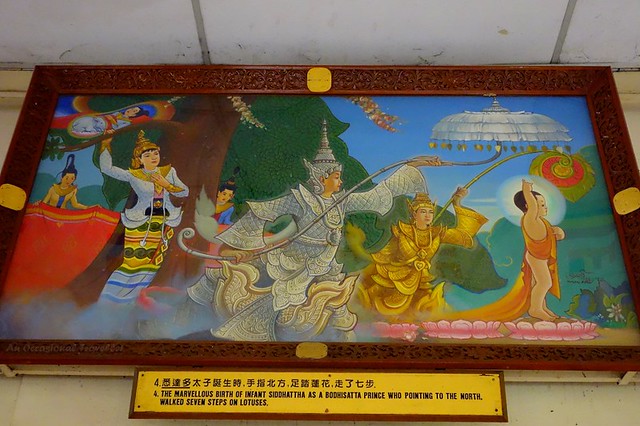 Painting depicting the journey of Buddha 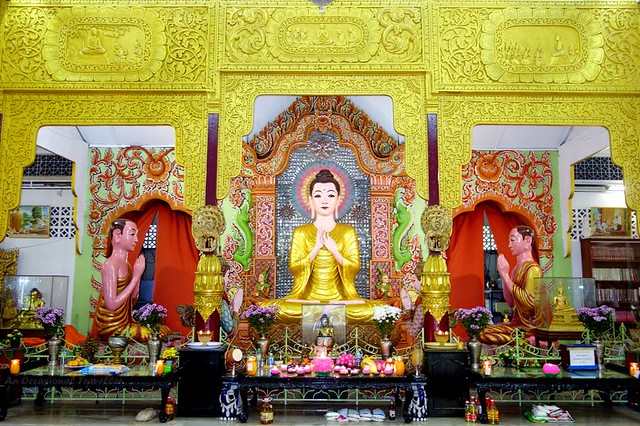 The main temple or The Sima Shrine Hall is located on the right of the temple entrance.  A pair of mythical creatures, chinthes stand guard at the entrance.  Upon entering the hall, visitors will be greeted by the huge standing marble Buddha statue.  I felt serene and content gazing into the peaceful expression of the Buddha. 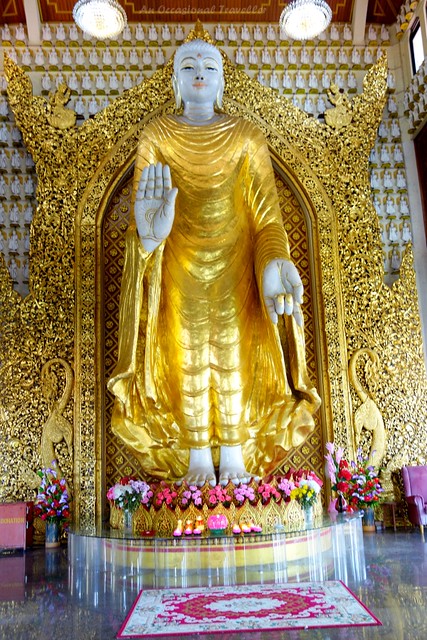 Two rows of smaller Buddha statues at the back of the standing Buddha are replicas of Buddha images from different countries such as Afghanistan, Bangladesh, Sri Lanka and Vietnam. 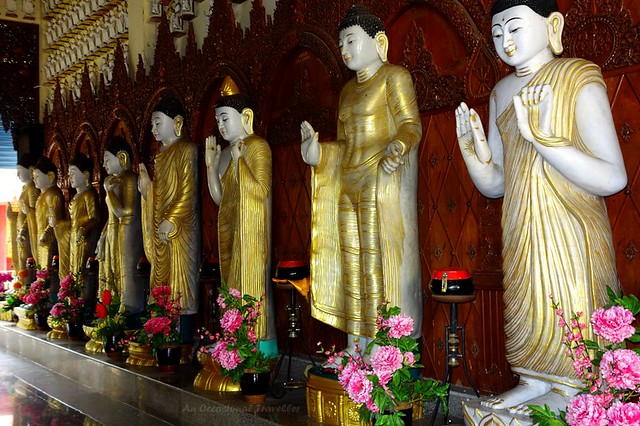 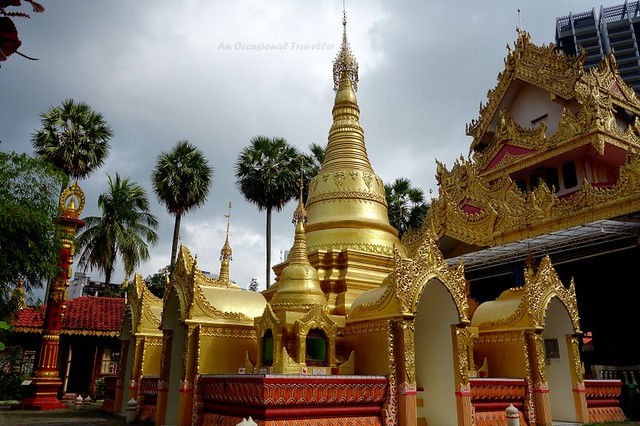 A chedi in the temple ground

The temple has a well maintain garden for a stroll and discover the various mythical creatures and beasts, religious icons, 3D mural painting and shrine. 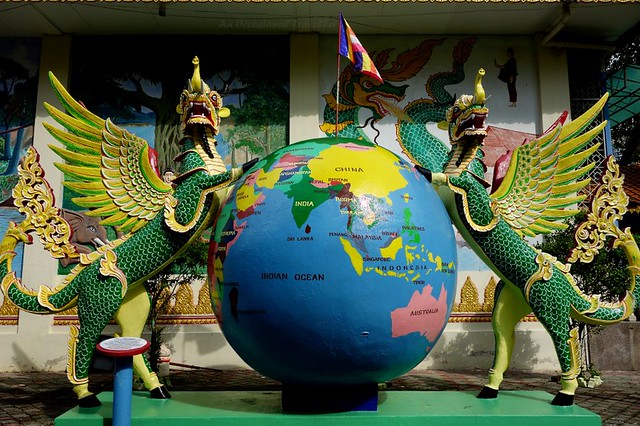 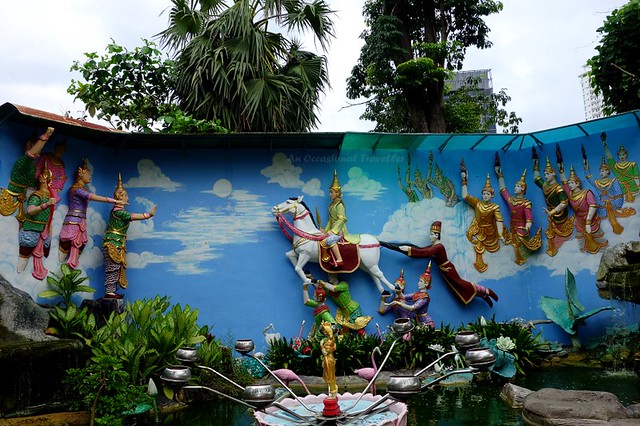 Not to be missed is the Golden Pagoda Bell Tower at the rear of the temple compound.  The four storey tower was opened in May 2011.  It houses replicas of ancient Buddhist shrines from around the world on the ground floor and first floors.  The upper floors contain statues of Goddess of Mercy, and Buddha.  On the balcony of the top floor, one can get a good view of the entire temple complex and the garden. 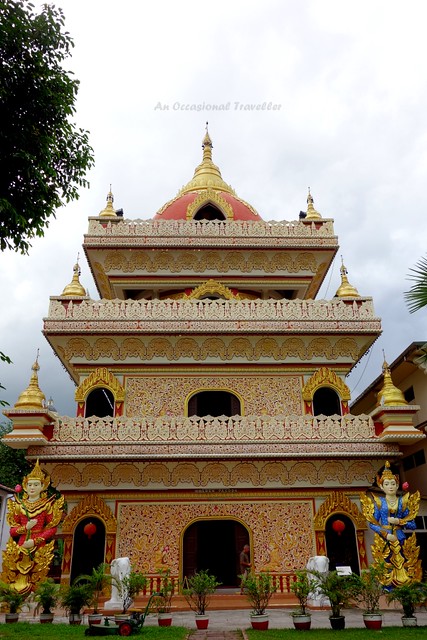 Golden Pagoda Bell Tower is a new addition to the temple 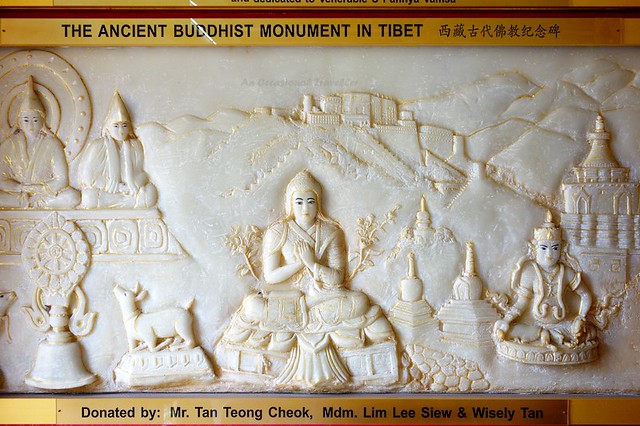 A replica of Tibet Potala Palace

I must say both temples are still worth a visit.  Best thing is entrance is free for both temples.  However donations are welcome to help with the upkeep and maintenance of the temples.