I intended to make a trip to this charming town for a while and finally had the time to visit Taiping recently.  The Town of Everlasting Peace is often overlooked by tourists who most often flocked to Ipoh or its northern neighbour of Penang. 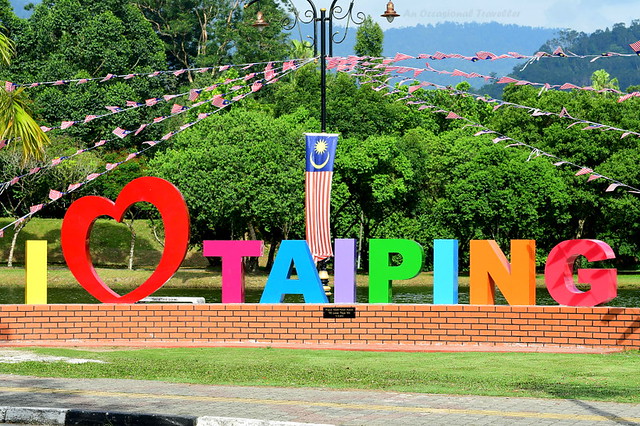 Taiping was established in 1874 after the end of the Larut War.  A little known fact is that Taiping used to be the capital of the Federation of Malay States of Perak, Selangor, Negeri Sembilan and Pahang.  Taiping was also the first state capital of Perak before it was moved to Ipoh in 1937. 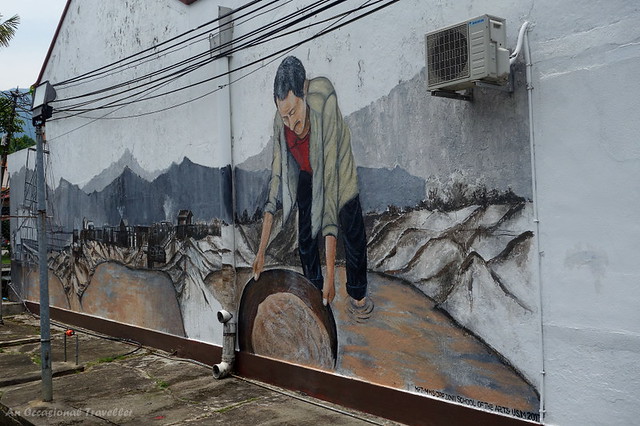 Wall mural depicting the heyday of tin mining in Taiping

The town flourished in the 19th century during the tin mining era in Perak.  Taiping has many firsts – amongst them are first railway line and station.  The railway station is no longer in use.  In its place are several eateries and a small museum.  A new railway station is situated a stone’s throw away complete with modern amenities and facilities.  It was buzzing with travellers during our visit. 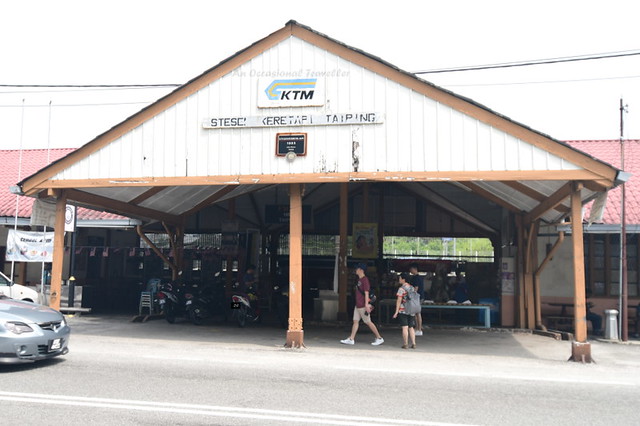 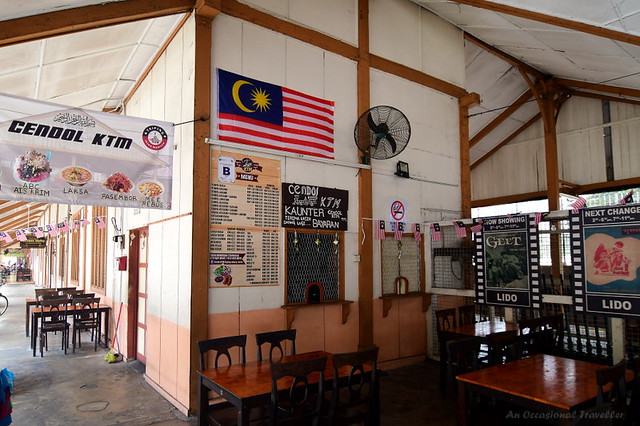 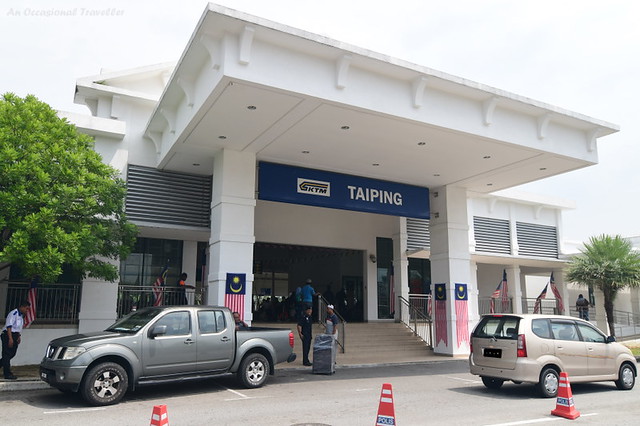 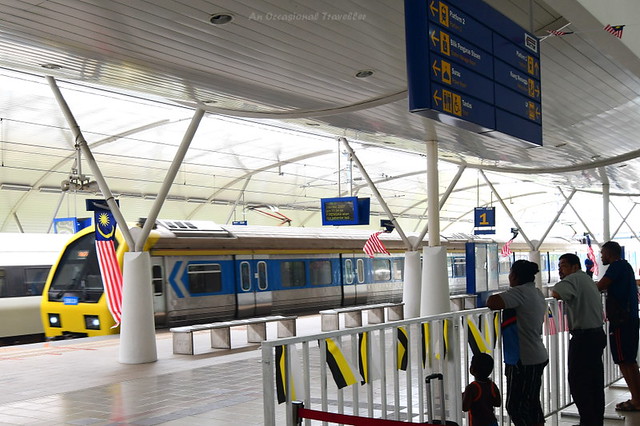 An ETS train pulling into the station

As Taiping used to be a major settlement during the British colonial era, the town is dotted with many heritage buildings from the 19th and early 20th centuries.  Most of these historical buildings can be visited on foot.

A notable architecture delight is the Larut, Matang and Selama District Land Office.  Built in 1897, it served as the offices of the British Government.  This building was declared a national heritage in 2012. 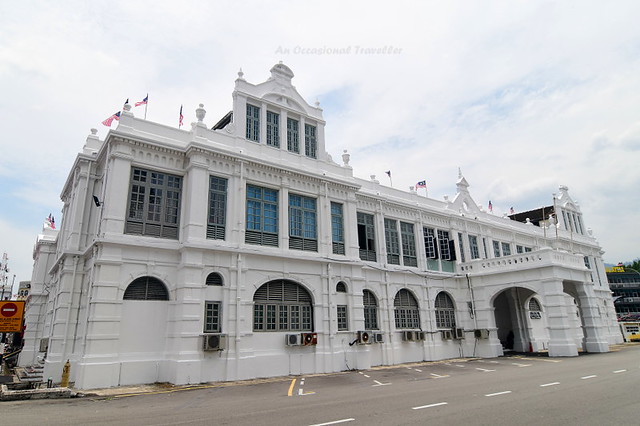 The grand and elegant land office

Another well preserved building that is still in use is The Hokkien Association.  The association was established in 1862 to look after the welfare of migrants from the Fujian province.  Today it still serves as a clan house for the Hokkien community. 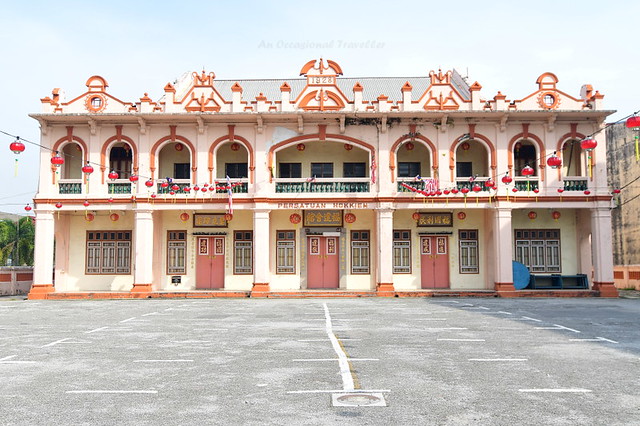 The Hokkien Association is built on a land donated by its first president, Mr Ng Boo Bee

The Anglo Indian style Peking Hotel was built in 1928 was used as the Taiping Rubber Dealers Association and the headquarter of the ‘Kempetai’ (Japanese Military Police) during the Japanese occupation. 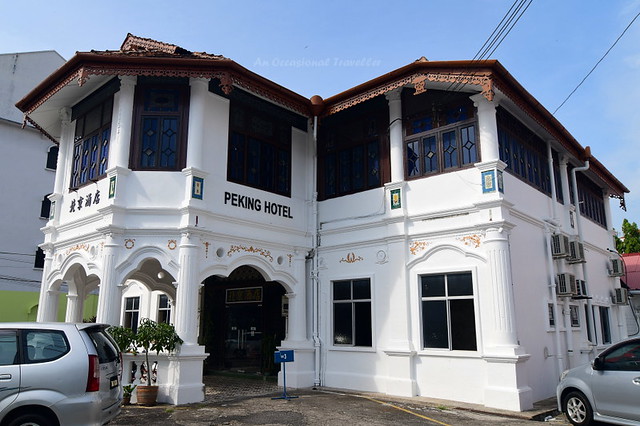 Peking Hotel was originally the residence of a wealthy businessman

The Taiping Clock Tower was built in 1881.  Apart from serving as the town’s clock, the building was used as a police station and fire station.  Today it houses the Tourist Information Centre. 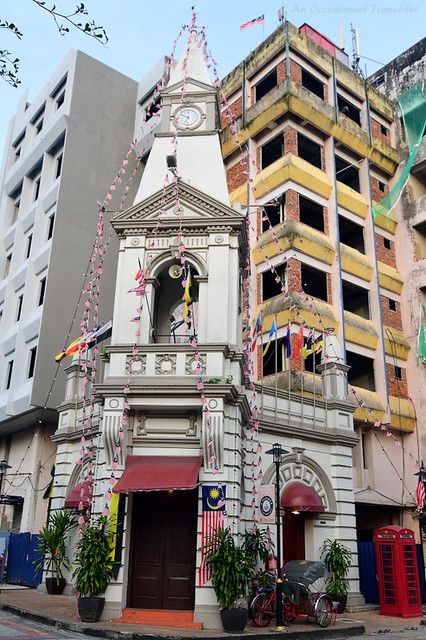 The iconic landmark of Taiping

Taiping also has a few well-known schools that were established during the colonial era.  The impressive St George’s Institution was established in 1915 as a Catholic boy’s school by Brother James Joseph Byrne.  The school started with 49 students and 7 teachers. 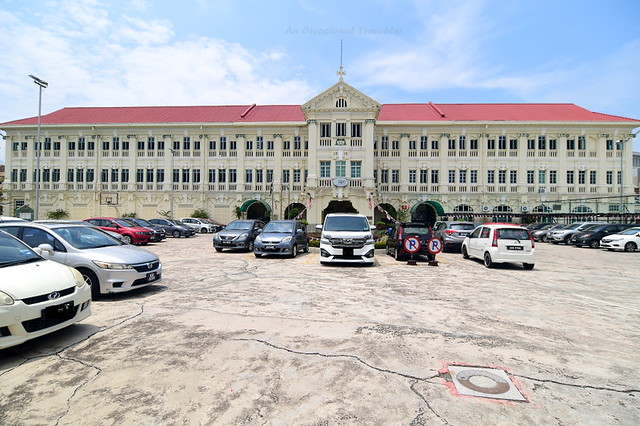 St George’s Institution is more than a century old

Taiping Convent School was established by Sister Prudence, Sister Angela and Sister Cecile as a Catholic girl’s school in 1899.  The school moved to its present location in 1931.  It was used as a military hospital during World War II. 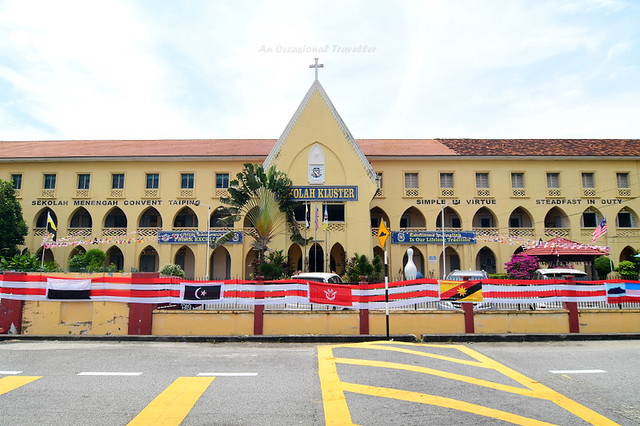 The school was the brainchild of Rev. Father Clement Charles Grenier

Next to Taiping Convent stands St Louis Church.  The current church was built in 1938 and it is one of only 2 Catholic churches in Taiping. 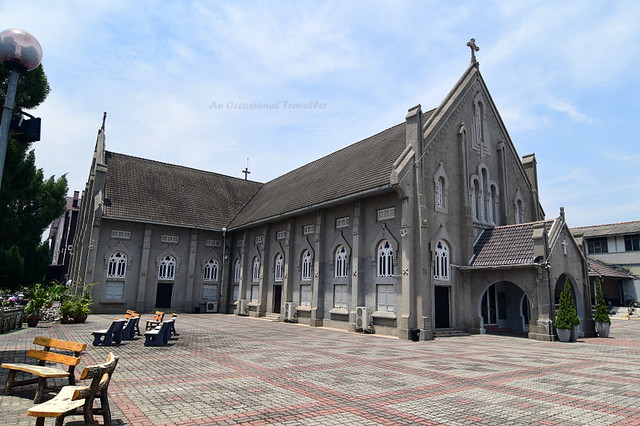 The church was consecrated on 11 September 1938

Hosian Temple was built by a rich tycoon, Cheng Yen Xin for his daughter who wished to become a nun.  The temple is still in use as a place of worship. 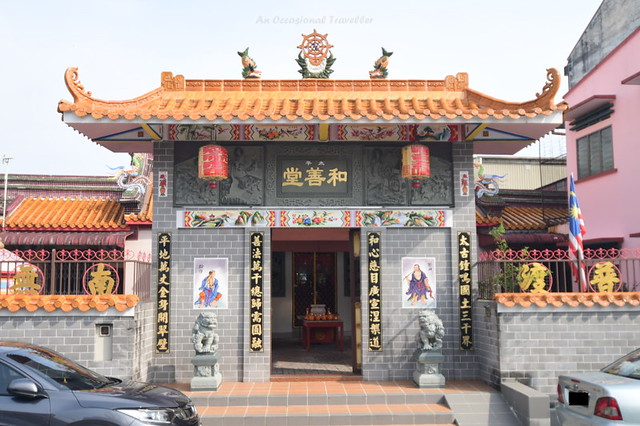 The Taiping War Cemetery is worth a visit as well.  The cemetery was established right after World War II to commemorate Allied soldiers who were killed fighting against the Japanese during World War II.  There are 867 headstones placed in the two sections – the Christian and non Christian graves.  Out of these, 331 are identified while the rest remain unidentified.  Visiting the cemetery is another somber reminder of the atrocities of war and to cherish the peace that we enjoy today. 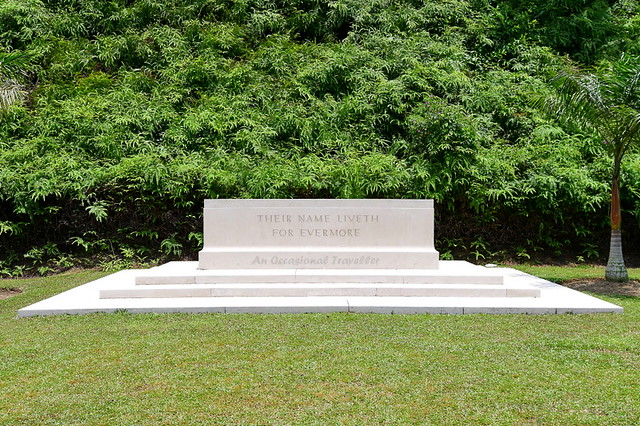 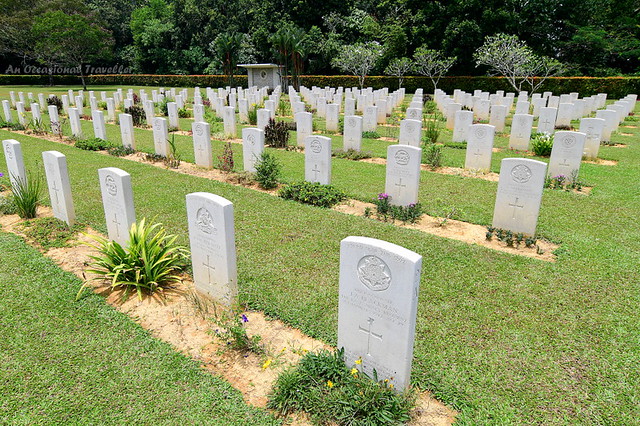 The cemetery is well maintained

The major draw of Taiping is definitely the 100 year old Taiping Lake Gardens.  The green lung of the town with its lake attracts not only tourists but locals for its tranquility and fresh air. 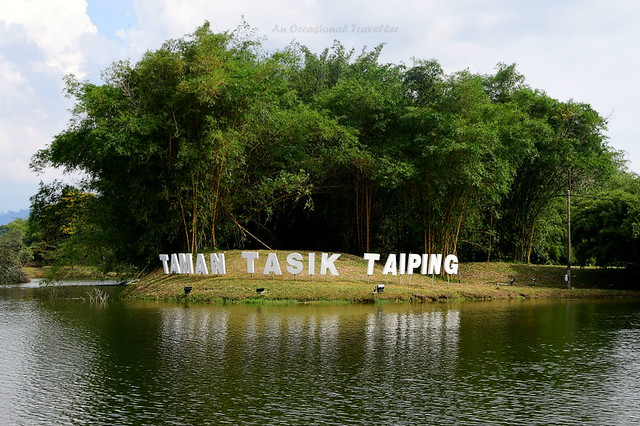 Grand old angsana raintrees that lined the road circling the lake provide shade to joggers and those who enjoy a stroll around the lake.  The well maintained garden is like a big community centre where people from all walks of life congregate every morning and evening. 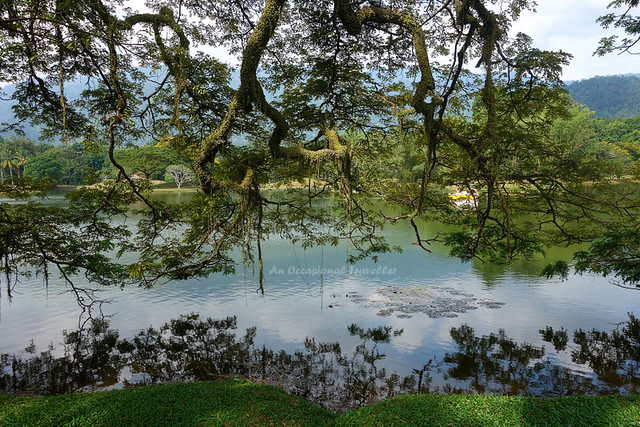 This sprawling garden attracts the crowd in the morning and evening 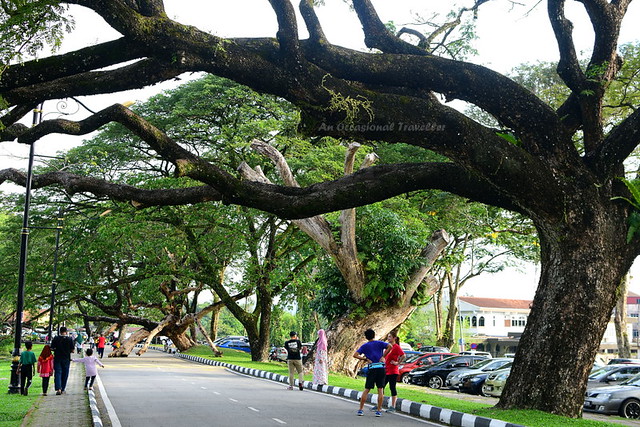 Joggers share the path with cyclists and walkers.  Music can be heard from the open fields where exercise groups are in full swing.  Individuals or groups are seen working out at the exercise apparatus station.  The lake is filled with paddleboats cruising around the lake. 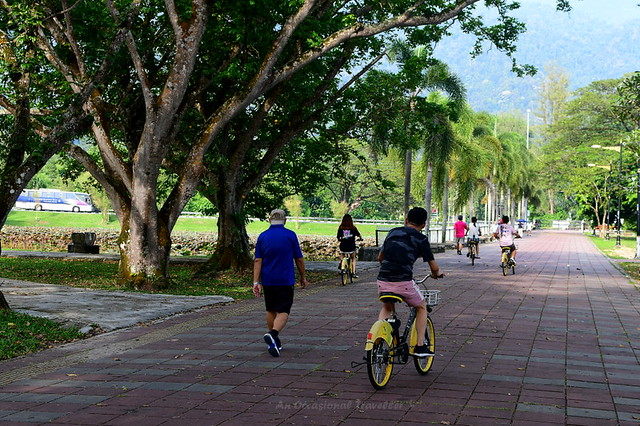 Joggers and cyclists sharing the path 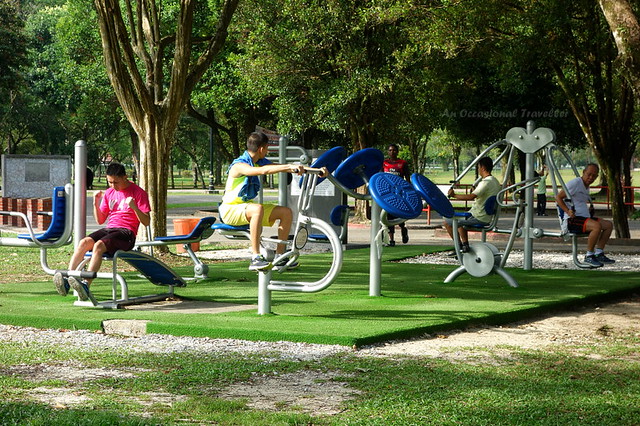 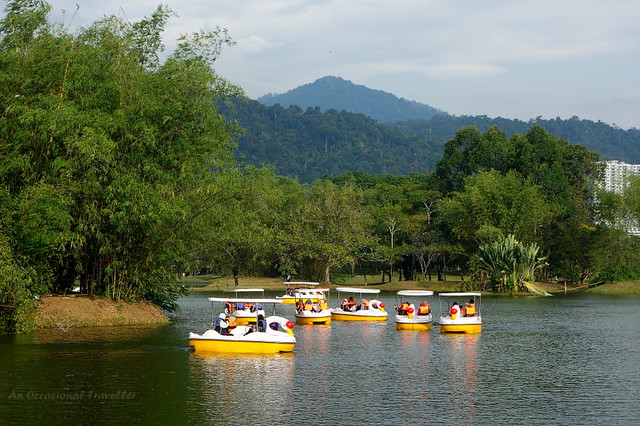 One can really spend a whole day at the lake gardens to explore this sprawling gem of Taiping.  Families with small children can also pay a visit to the country’s first zoo, Taiping Zoo and Night Safari which is located within Taiping Lake Gardens. 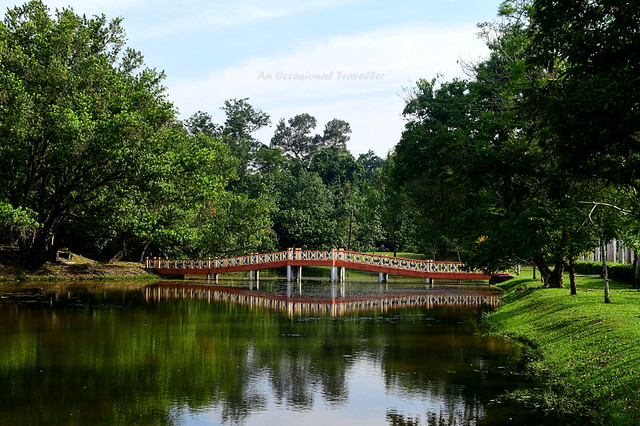 One of the bridges at the lake gardens 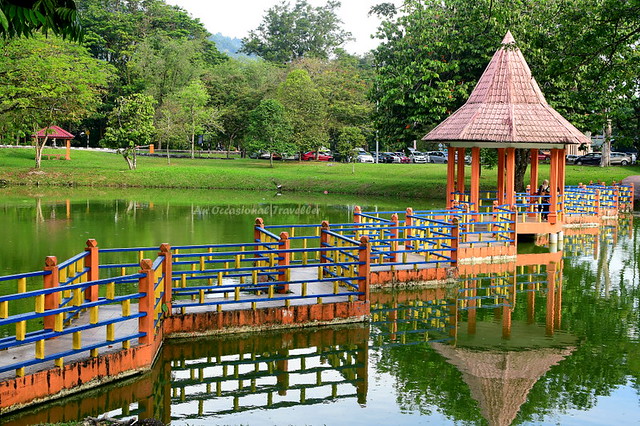 A family taking a stroll on the zigzag boardwalk

There is still plenty to explore in this historic town and its surrounding areas.  Taiping is definitely worth another visit.