Food plays a major part of my trip to the Pearl of the Orient.  I will usually make a list of eateries I want to go whenever I make a trip to Penang.

Our first stop was at Lok Pin Café because I wanted to try out ban chang kueh (曼煎糕).  The stall is actually located outside the coffee shop.  I ordered a piece with standard fillings of crushed peanuts and another filled with crushed peanuts and corns.  He was definitely generous with the fillings.  The aroma of the freshly made ban chang kueh was mouth watering and I love the thin crispy texture. 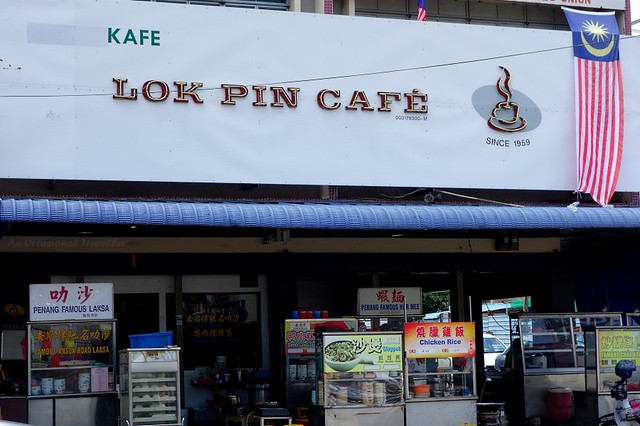 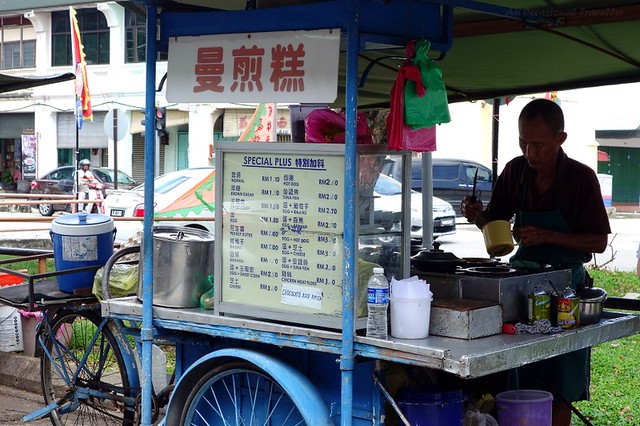 The ban chang kueh stall outside of Lok Pin Cafe 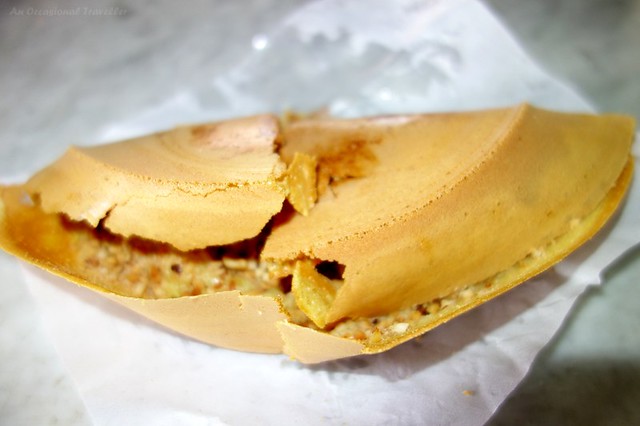 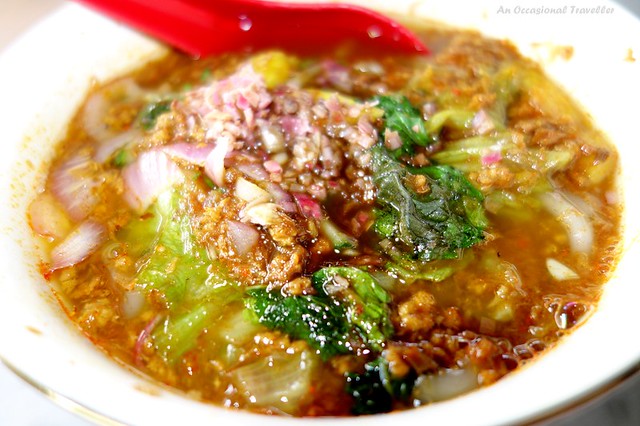 Assam laksa with plenty of flakes mackerel mixed in the broth 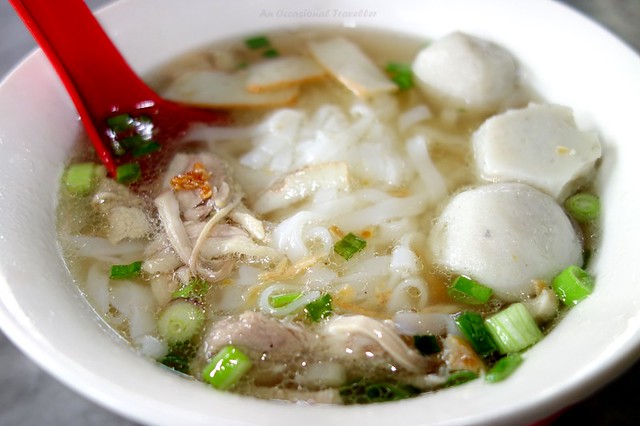 We had breakfast at Tuai Pui Curry Mee before visiting Upside Down Museum nearby.  As the name suggest, the shop only offers curry noodles.  A bowl of curry noodles come with cockles, cuttlefish, coagulated pork blood, tau foo pok (beancurd puffs) and topped with mint leaves which enhances the aroma.  The dollop of homemade chili paste added the extra kick to the creamy broth. 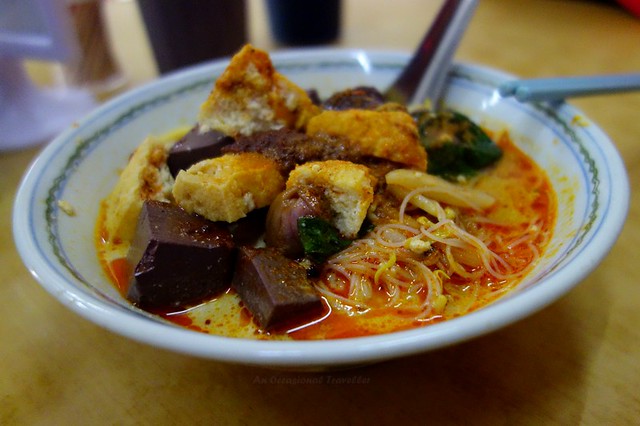 The shop offers a variety of add on such as fish ball, squid, curry chicken, chicken feet to chicken innards.  As we didn’t order any add on, I don’t know how much these will cost. 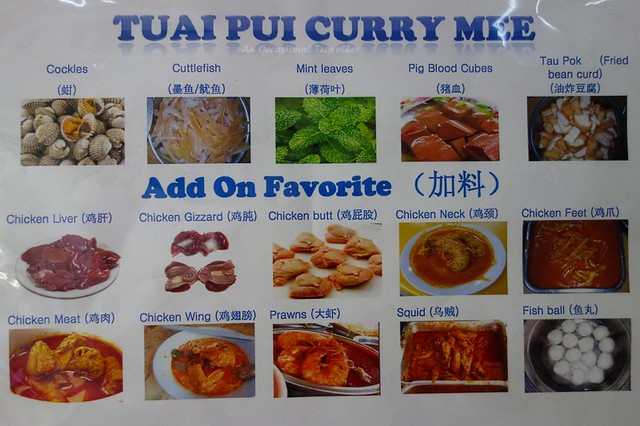 Whenever we are in Penang, we will not miss a bowl of cendul from the Penang Road Teochew Chendul.  However these days we usually head to their shop which is housed in three shop lots instead of the stall which still attracts long queues. 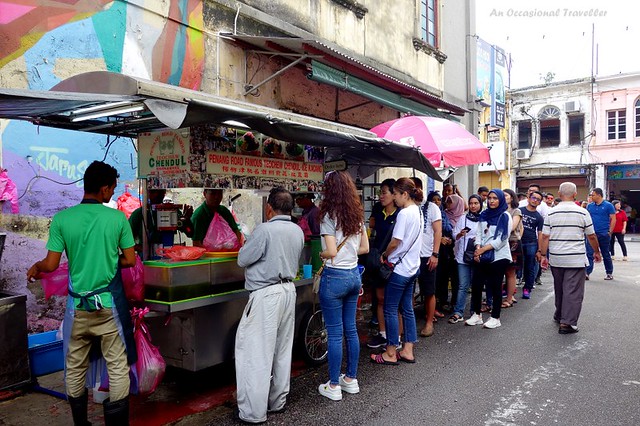 Long queue like this is a common sight especially during weekends 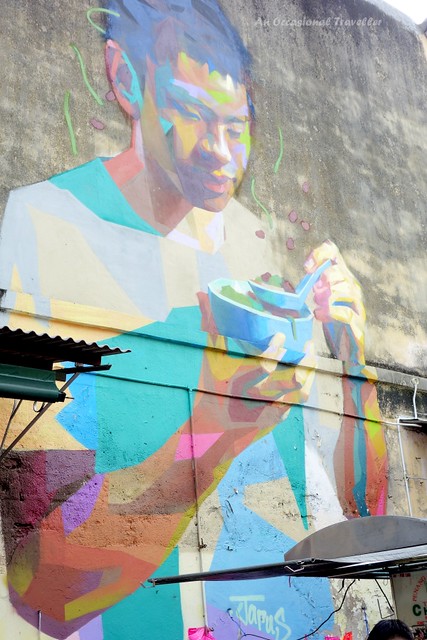 There are a variety of popular Penang dishes offered at the shop such as char koay teow, assam laksa, Penang hokkien mee (prawn mee), rojak.  Most of the food we tried was pretty decent. 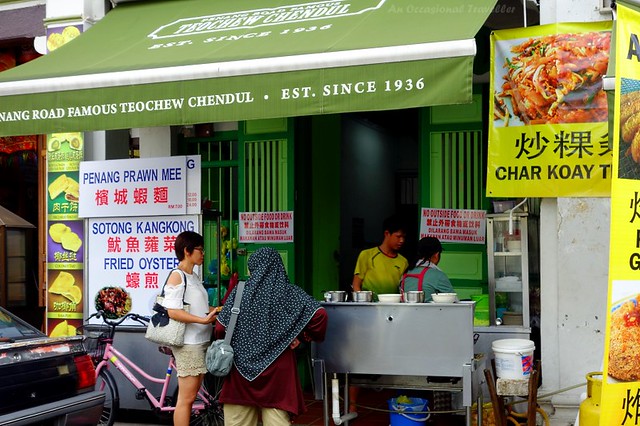 One can dine comfortably in their shop 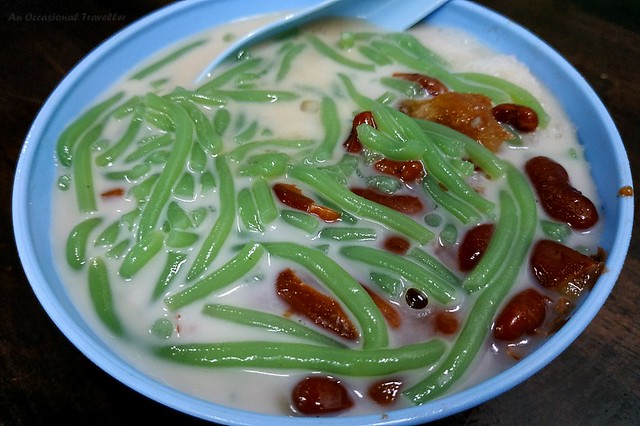 A refreshing bowl of cendul for a hot sunny day 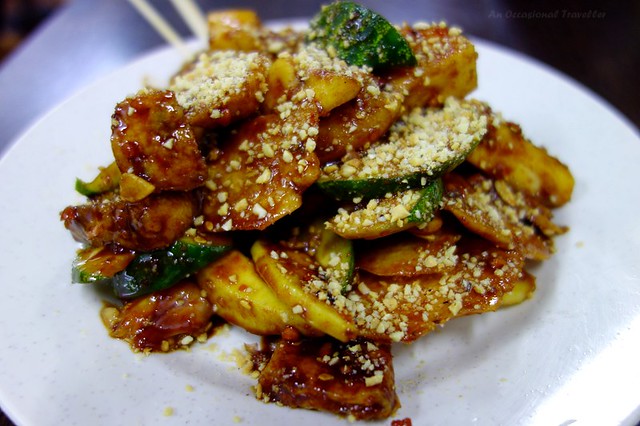 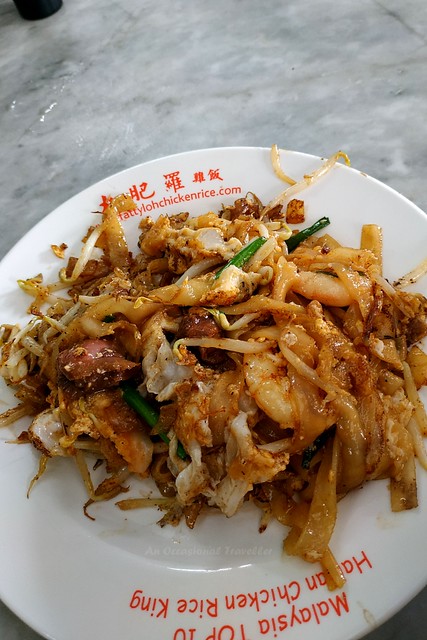 As we were leaving the shop, we saw a stall selling a variety of fried fritters and couldn’t resist picking up the freshly fried jackfruit.  Due to its freshness, the jackfruits were crunchy on the outside yet juicy inside. 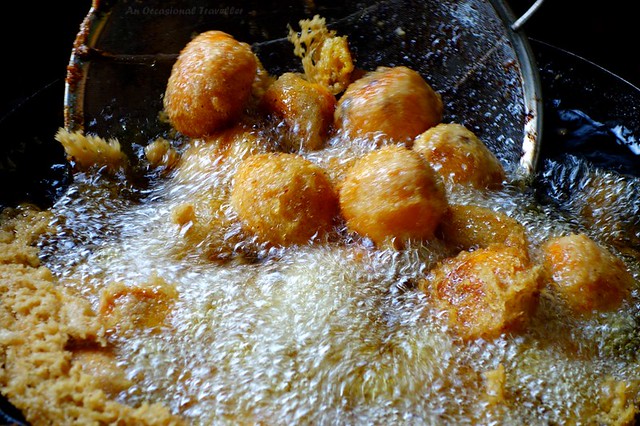 Jackfruits being fried in a big wok 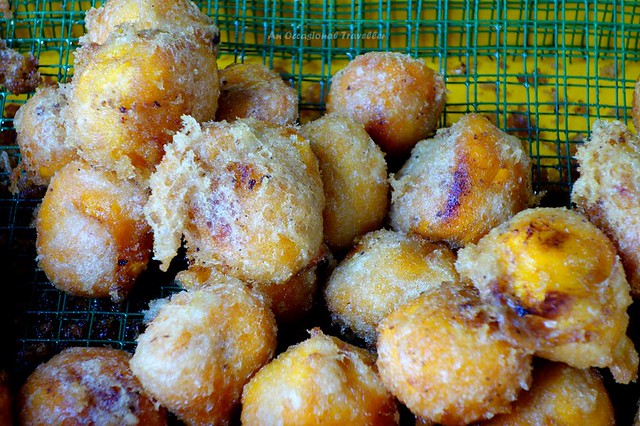 The jackfruits were crunchy on the outside yet juicy inside

We also ventured further afield in search of good food this trip.  We ended up in Restoran Bee Hooi on Jalan Burmah.  The shop was buzzing with diners when we arrived but we managed to get a table as we arrived just after 6pm.  The restaurant filled up rather quickly though.

To start off, we ordered a bowl of loh mee that came with slices of mushrooms, pork, hard boiled eggs and fried shallots.  The loh mee was good with thick and starchy gravy.  However serving was quite small.  But it allowed us to try more stuff. 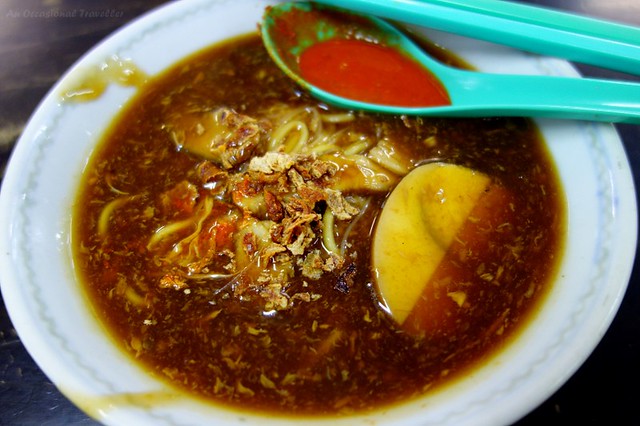 The loh mee was good but small portion

The char koay teow stall was busy, so we figured it must be good and promptly ordered a plate.  We had to wait awhile before our order was delivered.  It came with a big prawn and fried with enough wok hei but somehow it lacks the oomph as it doesn’t have lard! 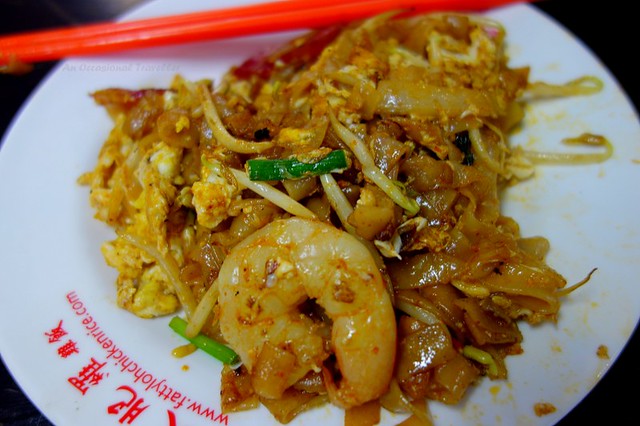 This plate of char koay teow was pretty good

The popiah was also good, it was filled with sengkuang, fried eggs and shrimps.  Best of all was the amount of sauce was just about right and not too dry. 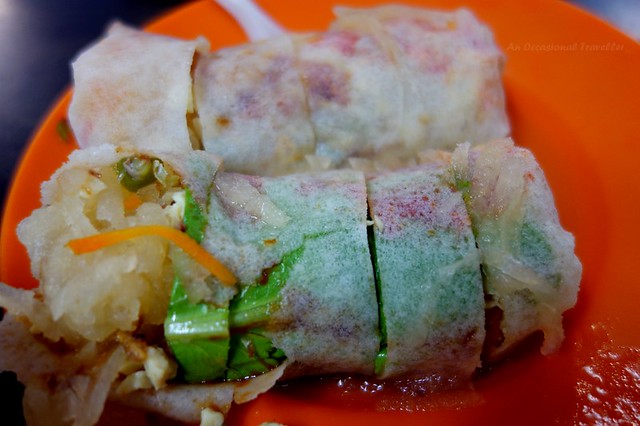 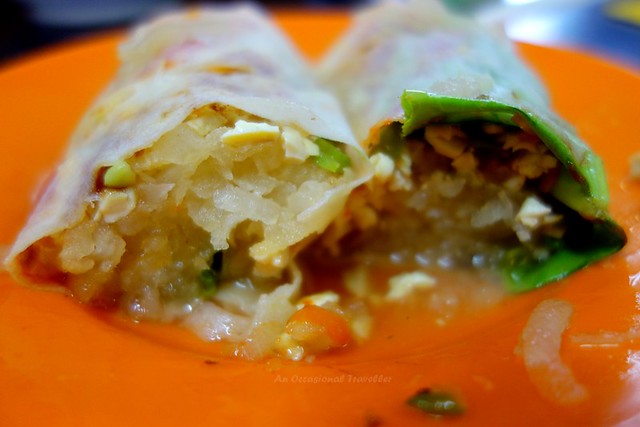 The popiah has just the right amount of sauce

As we were in Pulau Tikus to visit the famed Thai and Burmese temples, we decided to have breakfast at 77 Food Yard.  The corner coffee shop is host to some nice hawker fare.  Due to its vicinity to the Pulau Tikus Wet Market, the coffee shop can get very busy with hungry patrons after their morning market shopping. 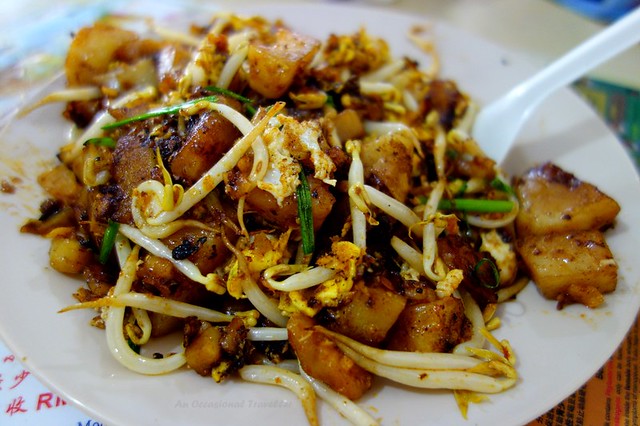 I also ordered a bowl of Penang hokkien mee.  The stall was managed by only one guy so it took almost half an hour before the bowl of hokkien mee reached our table.  It was good though as I can taste the prawn in the broth and it wasn’t too spicy. 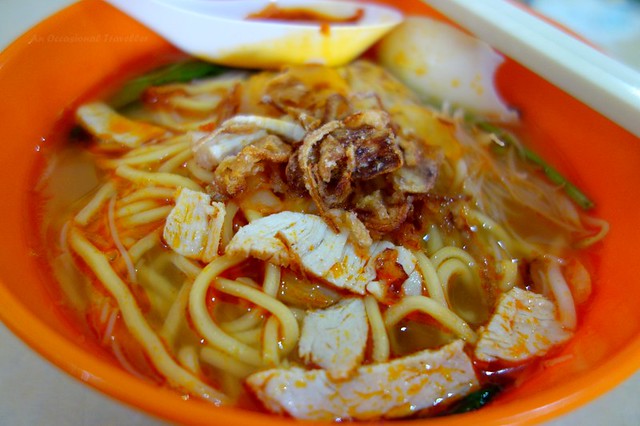 While waiting for the hokkien mee, I also tried out the ban chang kueh sold from a truck parked beside the coffee shop.  This pancake is of the thick version but still good with lots of crushed peanuts and corns. 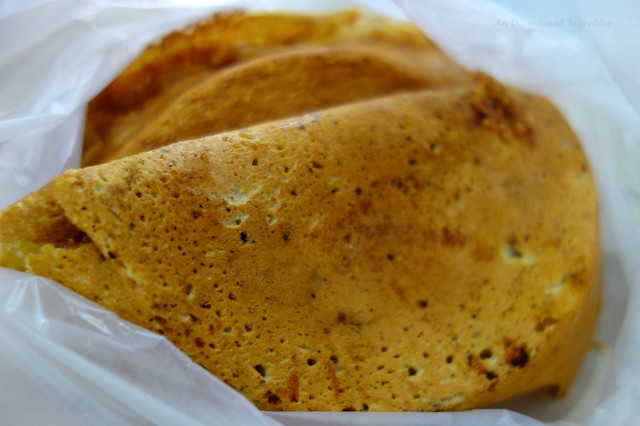 This is the thick version ban chang kueh 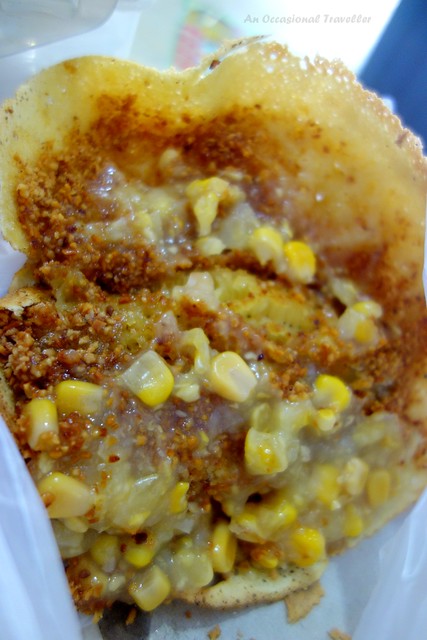 After a hearty breakfast, time to burn off some calories by doing some sightseeing to Wat Chaiyamangalaram and Dhammikarama Burmese Temple.