I have been to Hong Kong a few times.  These days I go to Hong Kong mainly for shopping and the food.  During one of the trips, I took Mom to Stanley (赤柱) as she hasn’t been to the area.  We took the bus from Exchange Square to the quaint Stanley Village.  The bus ride offered some beautiful views of the ocean, cliffs and high end properties. 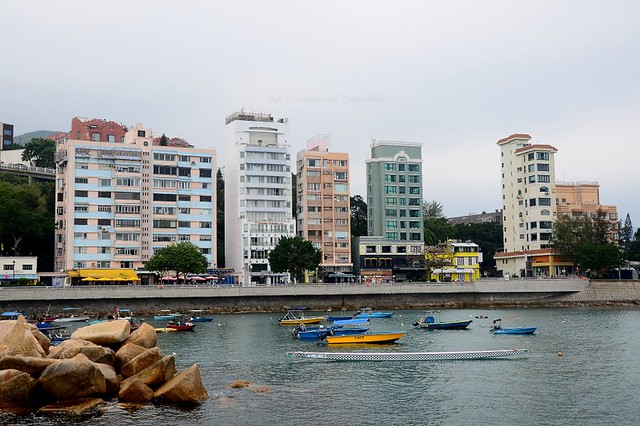 Our first stop was the Stanley Promenade.  The whole place has a very chilled and relaxed vibe.  We took a leisurely stroll towards Blake Pier (赤柱卜公码头) along the waterfront.  Tsui Wah Ferry Service operates ferry between Aberdeen and Po Toi Island via this pier. 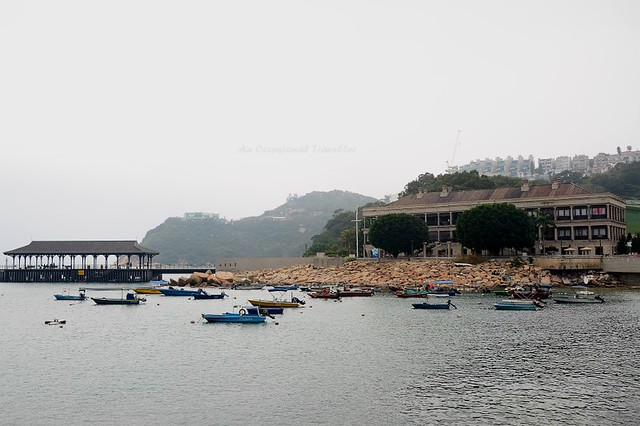 View of Blake Pier and Murray House from Stanley Promenade 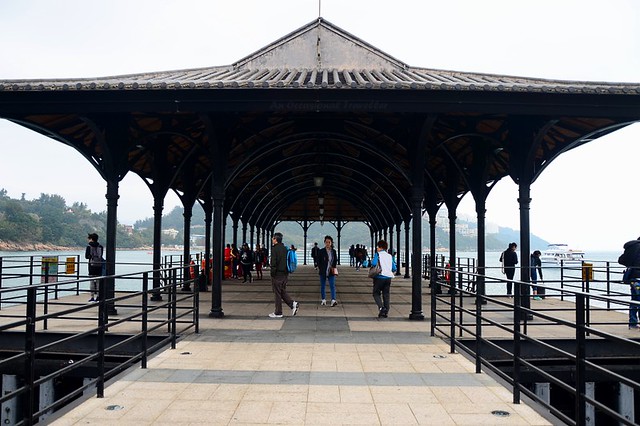 Visitors can take a ferry to Aberdeen from this pier

From the pier we made our way to the historic Murray House.  This Victorian era building was moved from Central to Stanley in the early 2000s.  It now houses shops and restaurants.

We also visited a few temples in the area.  Pak Tai Temple (赤柱北帝庙) is a Taoist temple to honour Pak Tai, God of the Sea.  It’s perched on a cliff-edge facing out to Stanley Bay.  Access to this temple is via a small entrance to Stanley Ma Hang Park. 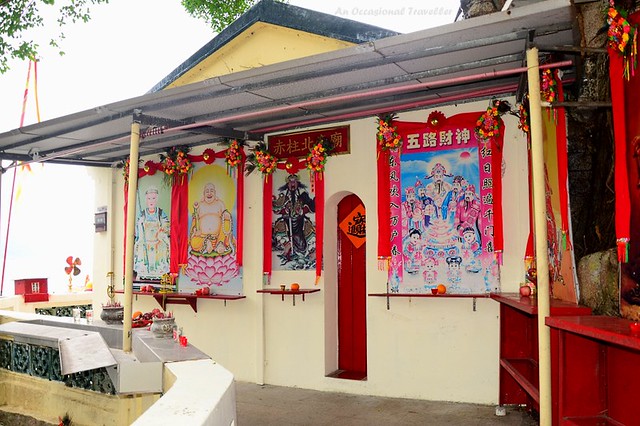 The Kwun Yam Temple (观音庙) is located away from the thoroughfare but worth a visit.  Located on top of a hill, it is dedicated to the Goddess of Mercy.  A large statue of the goddess sheltered by a pagoda is built next to the main temple.  The temple was quiet and serene during our visit. 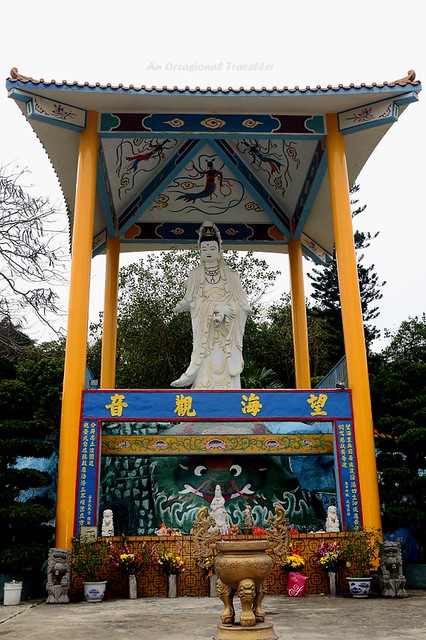 Goddess of Mercy overlooking the sea

At the southern end of Stanley Main Street is a very small temple built facing the sea.  While not many visitors are seen at this temple, the small rocky beach near the temple is a popular spot to watch the sunset. 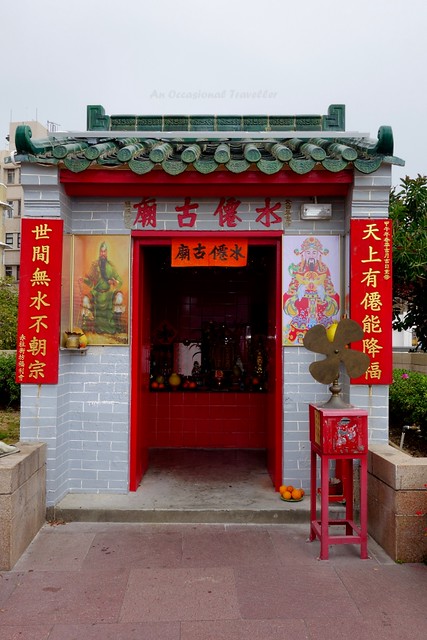 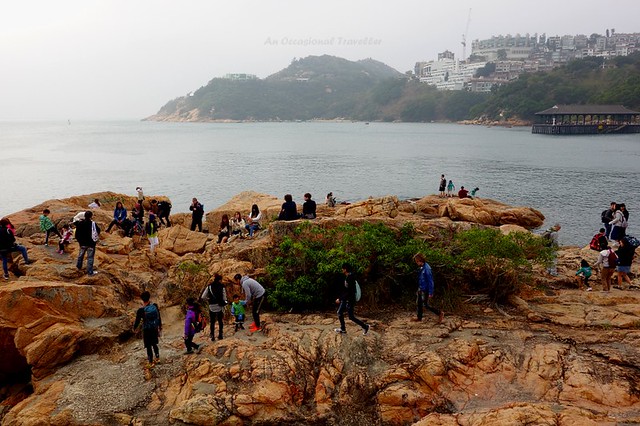 A good spot for sunset view at Stanley

Our final stop was the famous Stanley Market.  Make up of small shops and street stalls, Stanley Market offers a good bargain for those looking for clothes, knick knacks, costume jewellery, toys, art pieces and not forgetting the souvenirs. 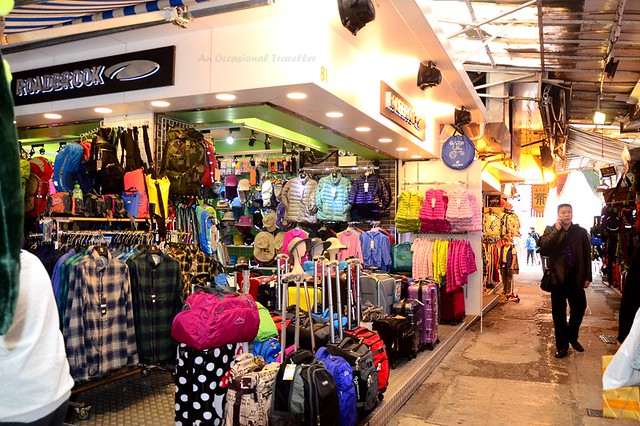 As it was still early, we decided to hop onto a bus to Aberdeen (香港仔).  Aberdeen is popular with tourists for its floating fishing village, floating seafood restaurants and the 600 junks in the Aberdeen Harbour.

A good way to get a feel of the area is to walk along the Aberdeen Promenade.  This waterfront park has wide walking path, fishermen’s sculptures and plenty of seating areas.  Locals gather under the pavilions for a game of chess. 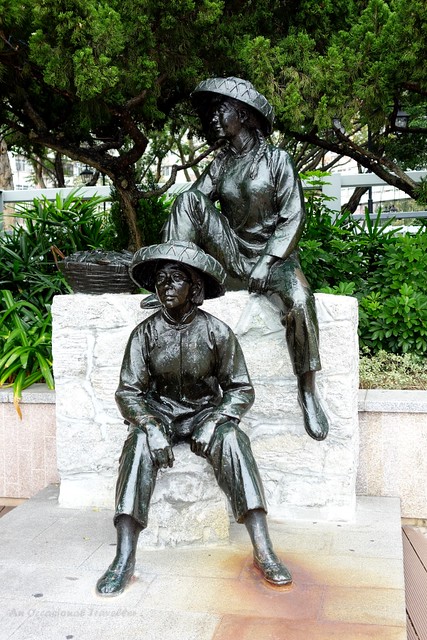 Statue of ladies with their fishes at Aberdeen Promenade

For a closer look of the floating village, we took a sampan tour at the pier.  The sampan ride usually last between 30 – 45 minutes and the fare varies.  Negotiation is a must!  The old lady was really skillful maneuvering her way around the waterway.  Though she didn’t give a running commentary but she did tell us the various points of interest. 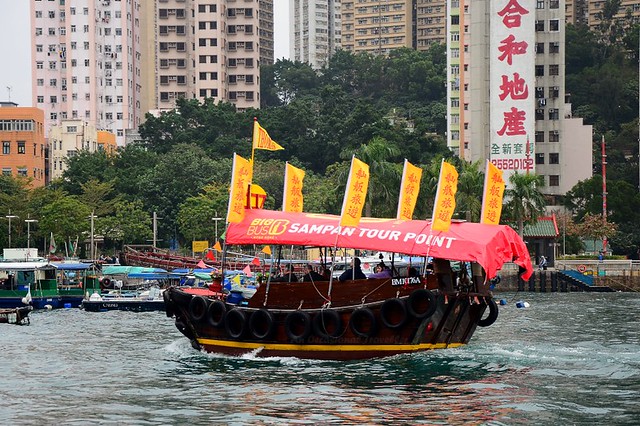 Tourists on a Sampan Tour of Aberdeen Harbour 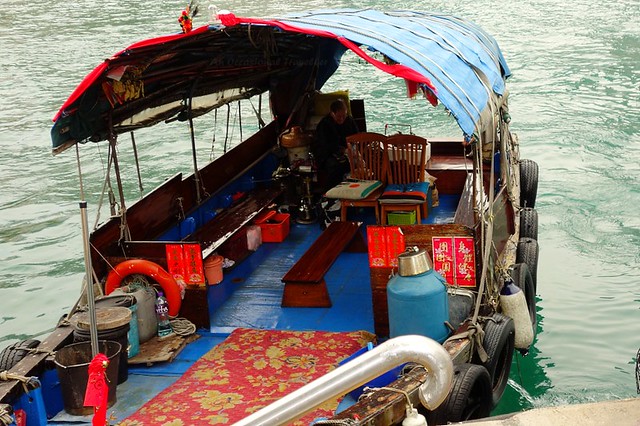 The small sampan we hired for the tour

The sampan boat tour took us past wooden floating homes which allowed us a peek into the daily lives of these Tanka fishermen and their families who still live on their boats.  The number has decreased as most of them have moved into the high rise apartments on land.  Now, the majority of boat people only fish on the boat during the day. 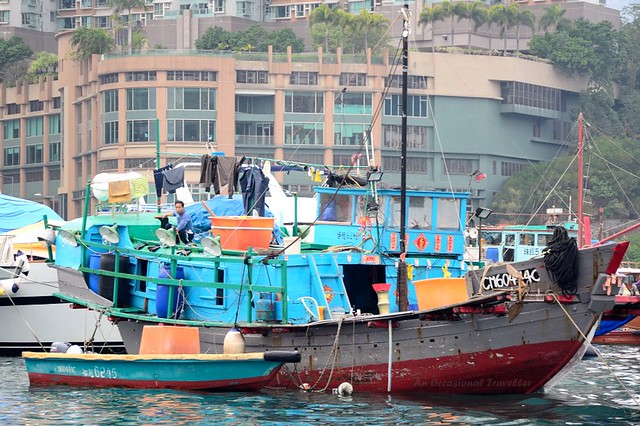 A fisherman relaxing in his home 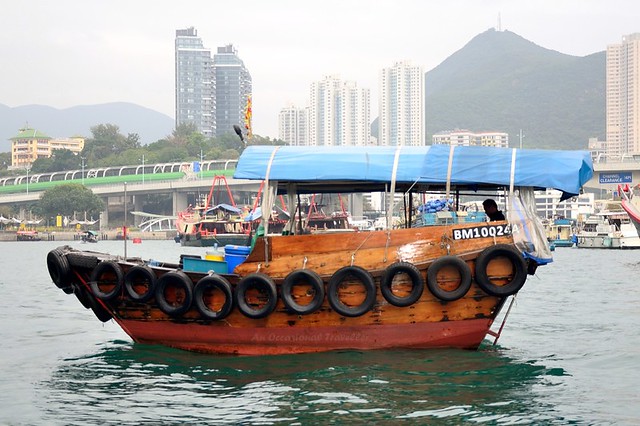 Another fishing junk plying the water of Aberdeen Harbour 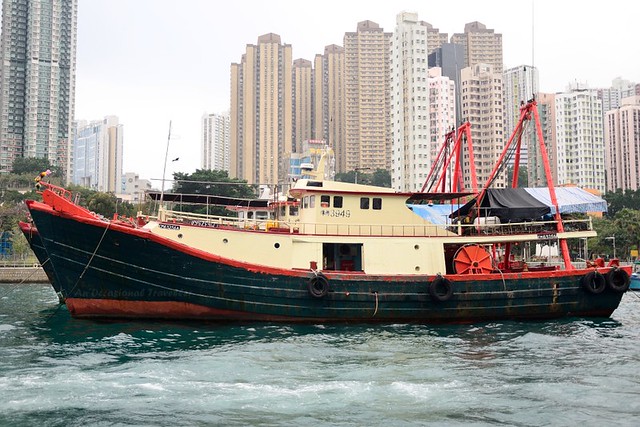 We also stopped briefly at the two floating seafood restaurants for a closer look.  Patrons of the restaurants can take a free shuttle boat at the pier along the promenade. 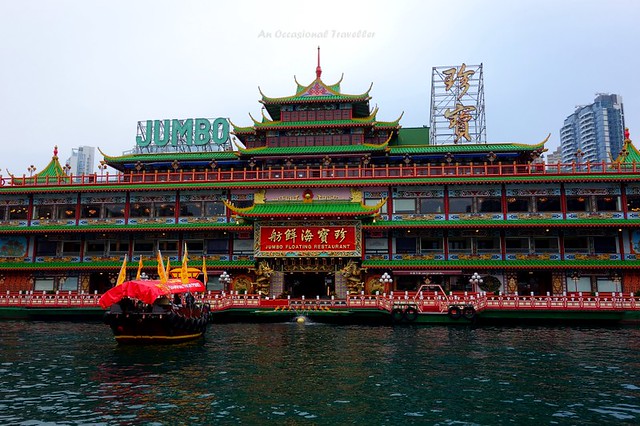 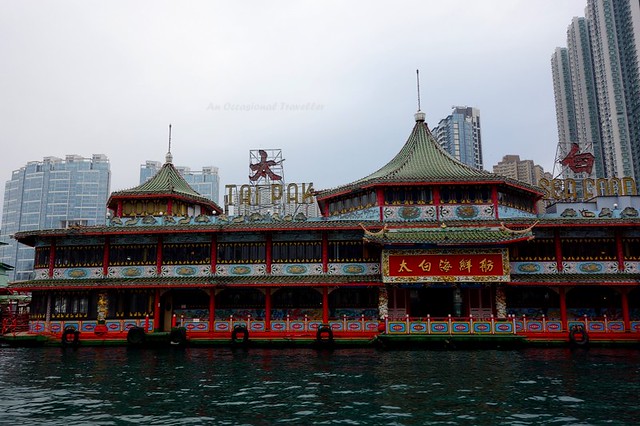 Tai Pak is the other big Floating Seafood Restaurant at Aberdeen 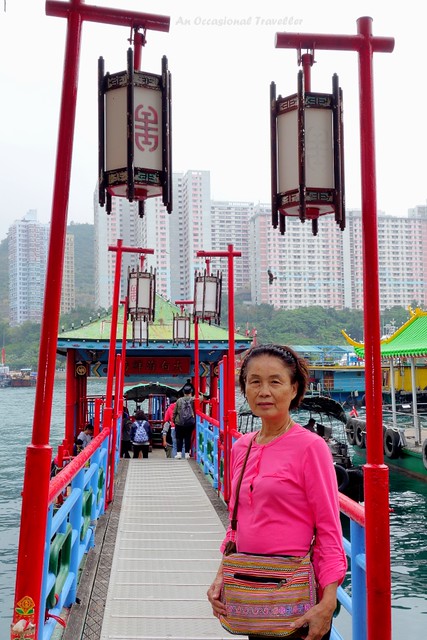 Though the trip to Aberdeen was unplanned, I was glad to have visited.  It gave me a glimpse of a very different way of life in a modern and cosmopolitan Hong Kong.  A traditional lifestyle and heritage that is fighting a losing battle to modernisation and development. 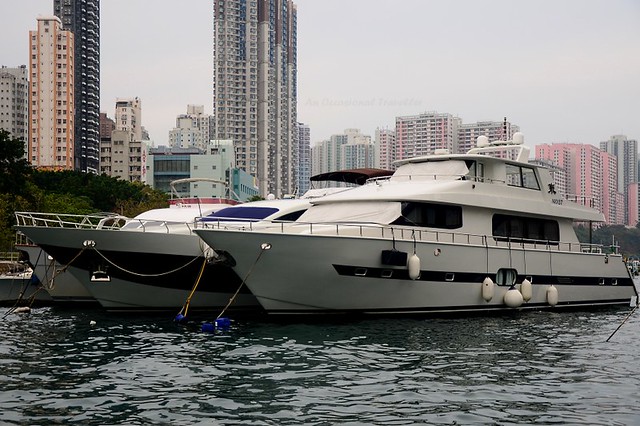 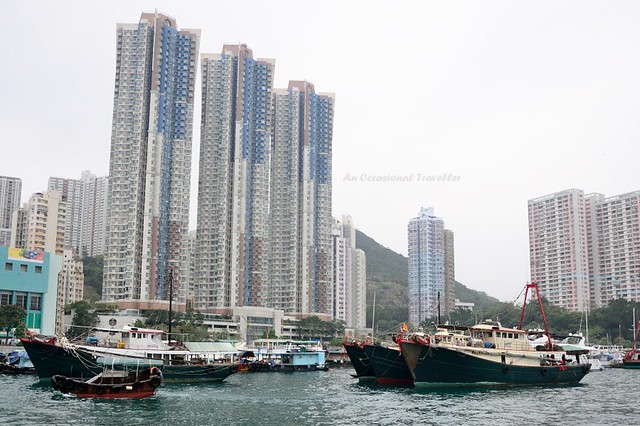 Mix of old and new at Aberdeen