I went for a short getaway to Penang, Pearl of the Orient recently. The trip was an eco trip as we experimented using public transport entirely – the LRT to KL Sentral followed by a bus ride to klia2 to catch our flight.

The trip was spontaneous – Airasia recently had promo fares in conjunction with the introduction of their new generation Airbus A320neo aircraft.  I took advantage of the promo fares and booked a return trip on the Airbus A320neo flights.

The A320neo has newly designed turbofan engines that give a 15% improvement in fuel consumption compared to the previous generation engines.  The CFM International LEAP-1A is a lean burn, low emissions eco-friendly engine. 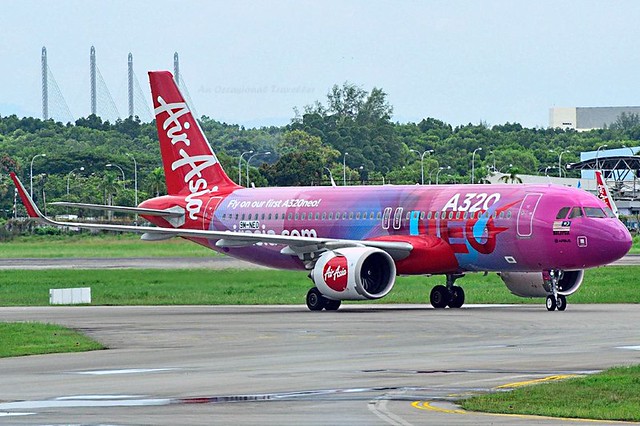 The newness was evident upon stepping into the plane with the smell of the leather seats, clean carpet and spotless interior.  The single class cabin has 186 seats in 31 rows of 6 seats – Airasia’s previous A320 planes had only 180 seats.  The seat cushions are thinner and lighter but it was comfortable.  Leg room remains the same even though seat pitch is reduced a little on most rows. Most travelers would not notice that this was a new generation plane with the Airbus Space Flex cabin as the differences were subtle. 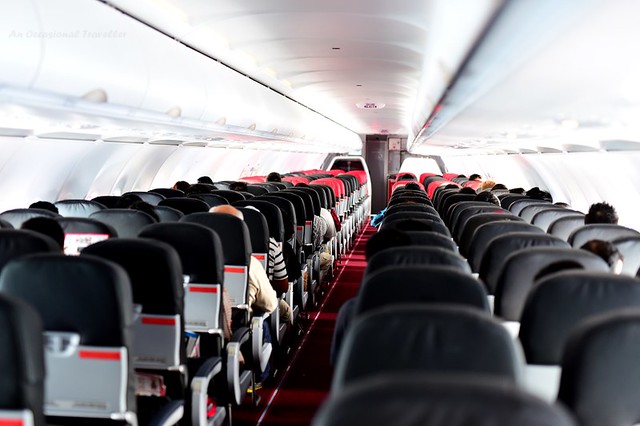 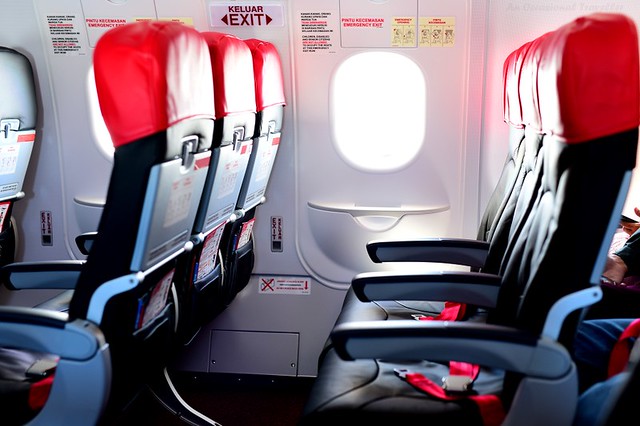 The thinner and lighter seats

There are 3 lavatories – one at the front and two new disabled friendly Space Flex toilets at the back of the plane.  The rear lavatory door is reinforced to house the jumpseat for the cabin crew.  This means that the crew can only use the seat during take-off and landing but not during the flight.  The lavatory space is really small though so one really has to maneuver carefully while answering nature calls.  The crew can quickly reconfigure the two rear toilets to make it into a spacious single toilet for disabled passengers, if needed. 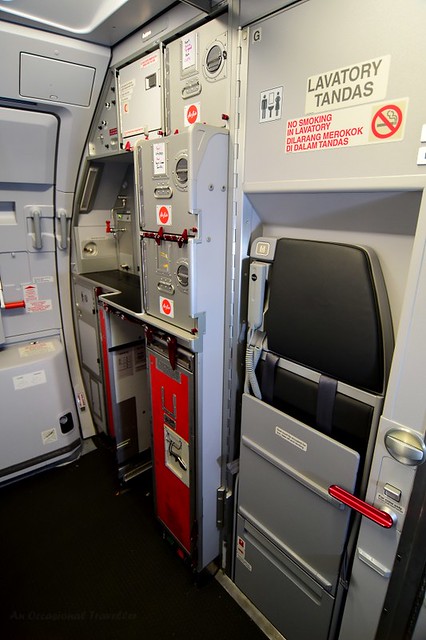 The galley and lavatory 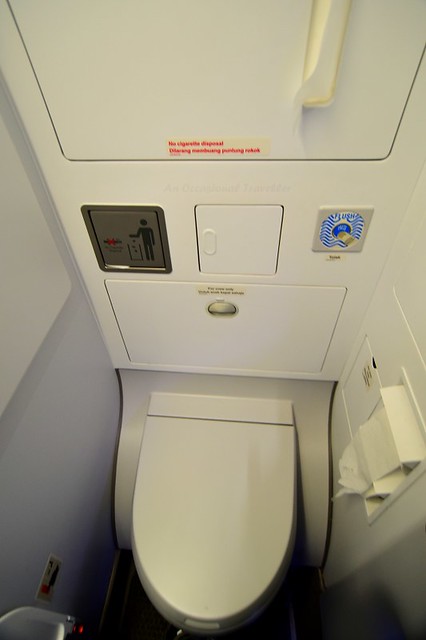 Very narrow space inside the lavatory 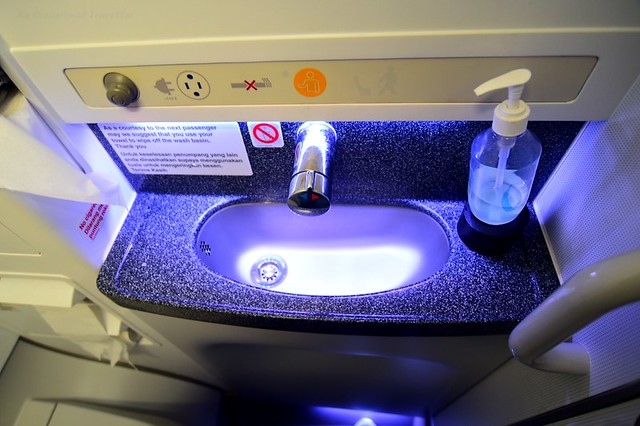 Wash basin next to the toilet

On arrival, we boarded a Rapid Penang Route 401E bus from the Penang Airport to Komtar.  The fare was RM2.70 per person.  As it is a commuter bus, there is no space for luggage, so if one is travelling with a lot of luggage, this might be a problem.  The trip took about 30 minutes.  The same trip in a taxi will cost RM30 or more. 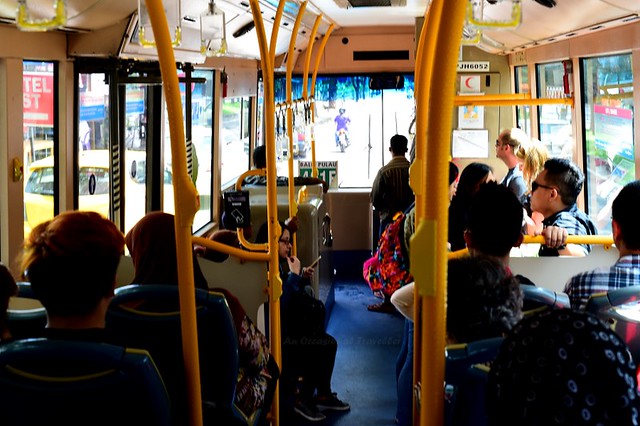 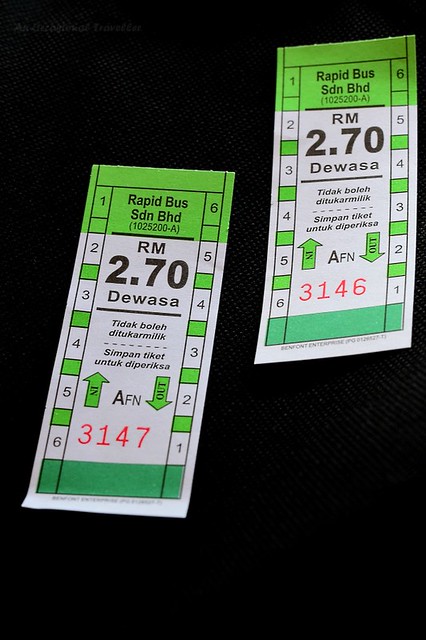 Public transport was the order of the day when we went to Air Itam to visit Kek Lok Si temple from Komtar the next day.  While Weld Quay Jetty is the main bus terminal, Komtar is a major stop for all the Rapid Penang buses.  The Komtar bus station is well signposted with bus route information.  Routes 201, 203 and 204 will take you to Air Itam.  The fare was RM2.00 per person and exact fare has to be tendered as no change is given. 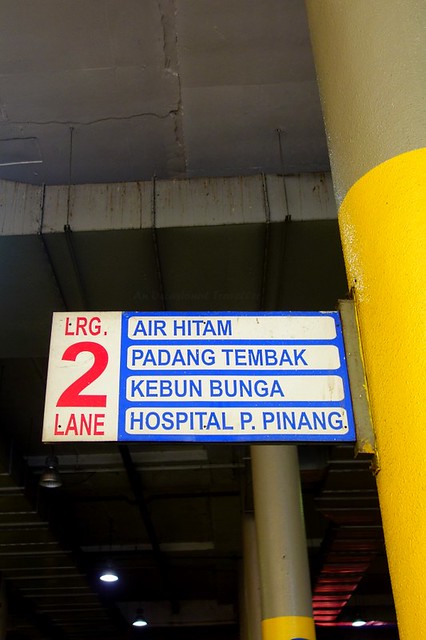 Signboard showing destinations of the buses at Komtar bus station 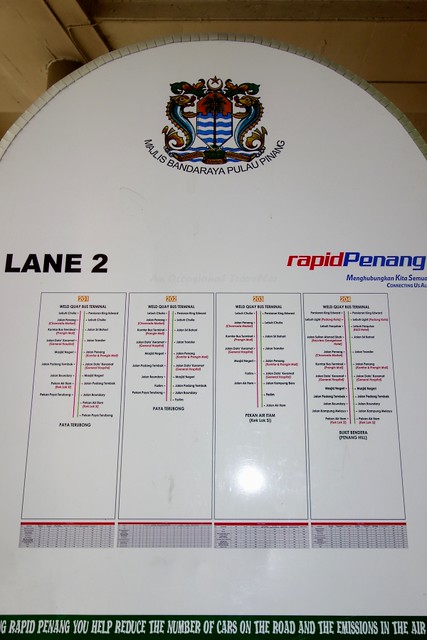 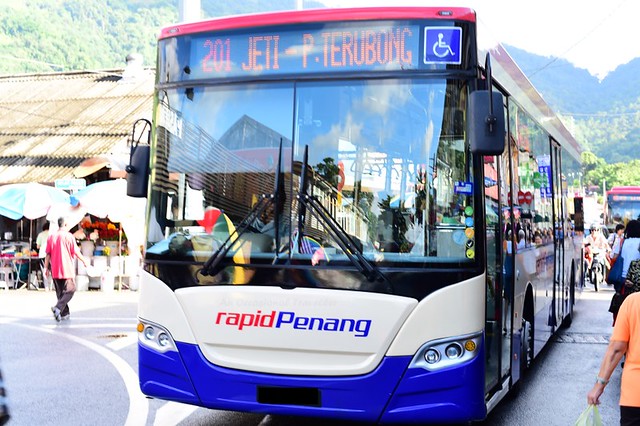 At Kek Lok Si, we took the inclined lift to the bronze Kuan Yin statue.  The fare, RM6.00 for a return trip, is not cheap though. 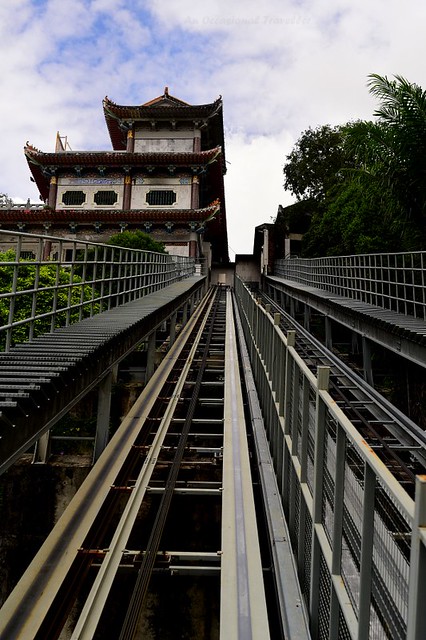 View of the cable system from the inclined lift

Rapid Penang also has a free shuttle bus service plying the streets of Georgetown within the core and buffer zones of the Georgetown Unesco World Heritage Site.  The Central Area Transit or CAT has 19 stops along its route between Weld Quay Jetty (Pengkalan Weld) and Komtar covering points of interests such as Khoo Kongsi, Penang Museum, Cheong Fatt Tze Mansion and Fort Cornwallis. 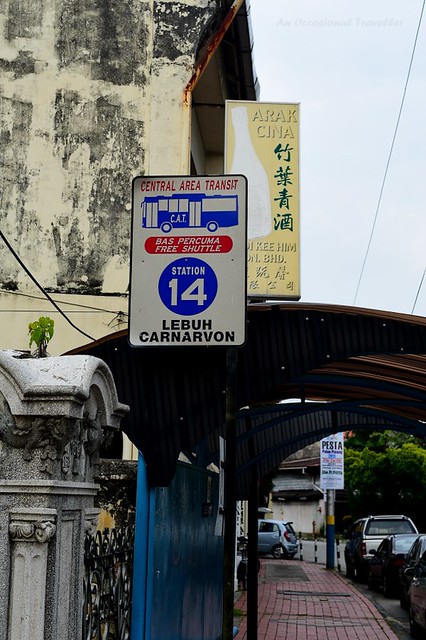 I must say that the bus service is good as we did not need to wait long for the bus to arrive. The fares were reasonable as well.  The trip was made more interesting as we managed it on slightly more eco friendly transport options.

On your next trip to Penang, you can perhaps consider leaving your car behind and try out the public transport when touring the island.  You will also be doing your bit for the environment!