Established in 1986, Taroko National Park (太鲁阁国家公园) is located on the east coast of Taiwan.  It’s named after Taroko Gorge, the landmark gorge of the park.  The park is well known for its scenic hiking trails, towering mountains formed from the movement of tectonic plates, marble gorge and amazing rock formations.

The nearest access to the park is Hualien, a small city about 2 hours train ride on Tze-Chiang Limited Express Train from Taipei.  On a normal train, the journey is slightly more than 3 hours.  Tickets on the express train sell out fast, so make sure you book your tickets 14 days in advance from the Taiwan Railways site.

There are a few ways one can explore the park.  The cheapest is using the Taroko Tourist Shuttle Bus but there is only one bus every hour.  One can also rent a scooter or a car, however some of the roads are windy and narrow.  The most expensive but most convenient is hiring a taxi for the day.

We hired a taxi to explore the park and I was glad I did as we hit very rainy weather throughout our stay in Hualien.  We had a lucky break in weather on the day we visited the park.

Our first stop after about half an hour drive from Hualien was at the Taroko Archway (太鲁阁牌楼).  We stopped briefly for a photo memento of our visit. 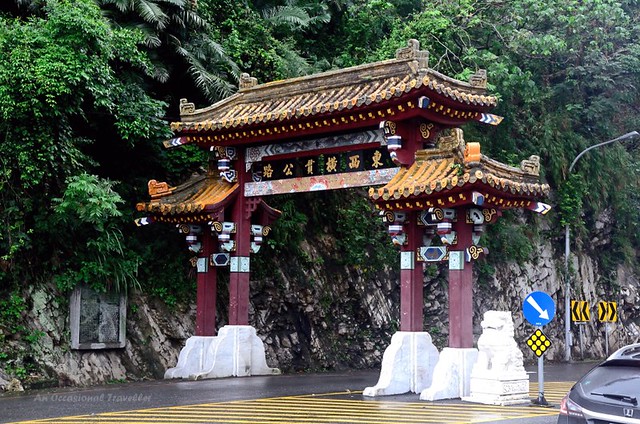 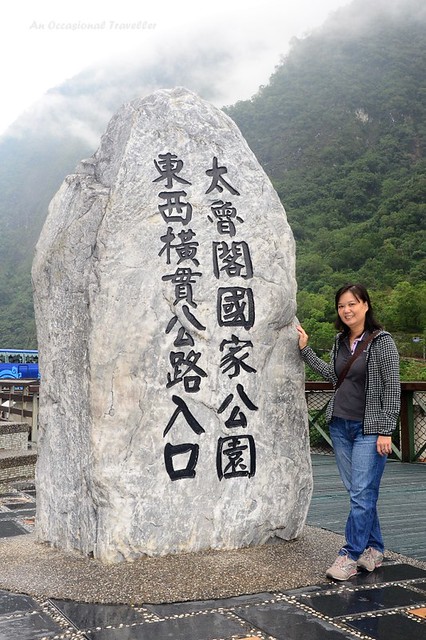 From the archway, we made our way to our first hiking trail, Shakadang Trail (砂卡噹步道).  This 4.4km trail which is along the Shakadang River is relatively flat and located nearest to the park entrance making it very popular with visitors. 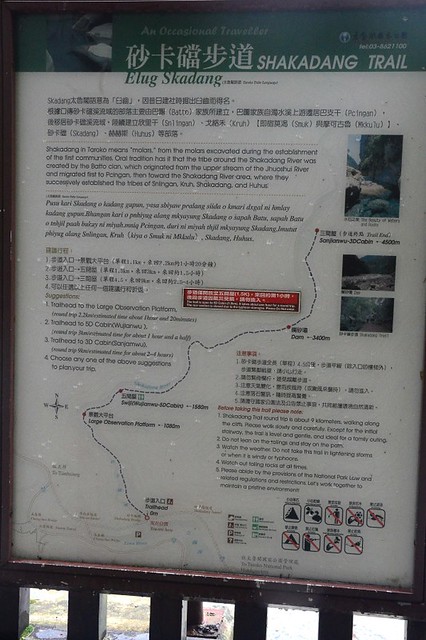 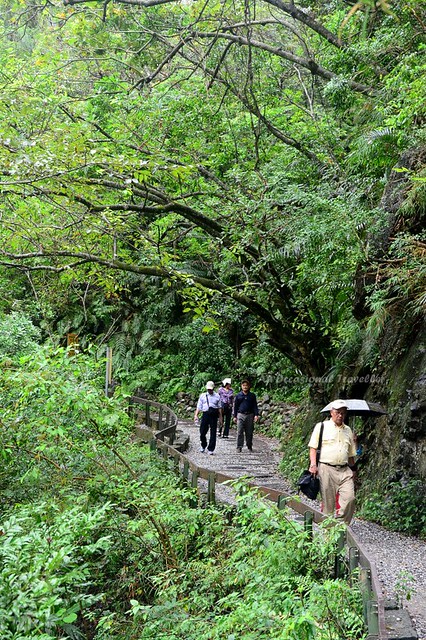 The footpath at the trail 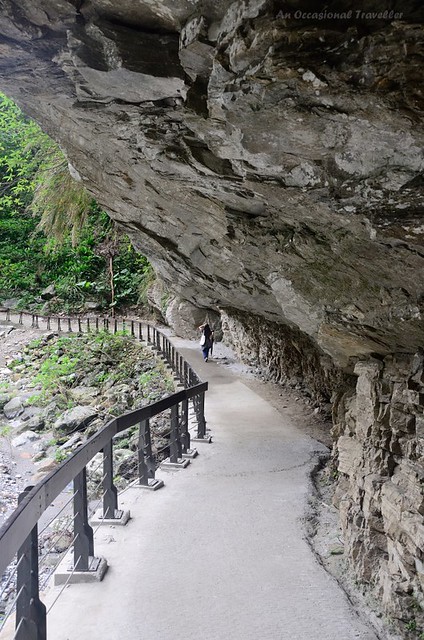 Overhanging rocks over part of the trail

During my visit, the trail was only opened up to 5D Cabin (五间屋) as the rear section was damaged by typhoon.

The highlight of the trail is clear turquoise blue water and the smooth stones with various different patterns from the river erosion over time. 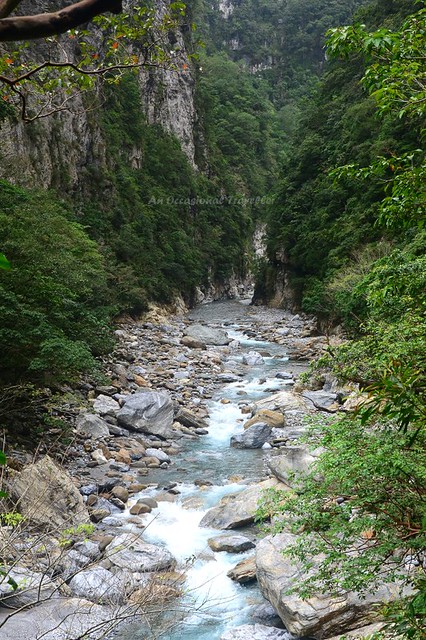 Shakadang River from which the trail is named after 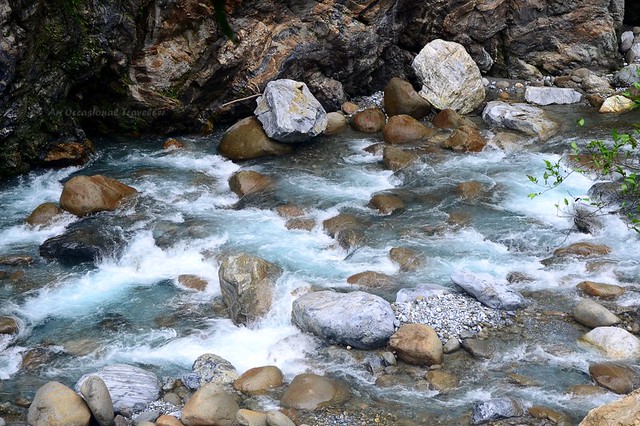 Stones that are smoothened by the river 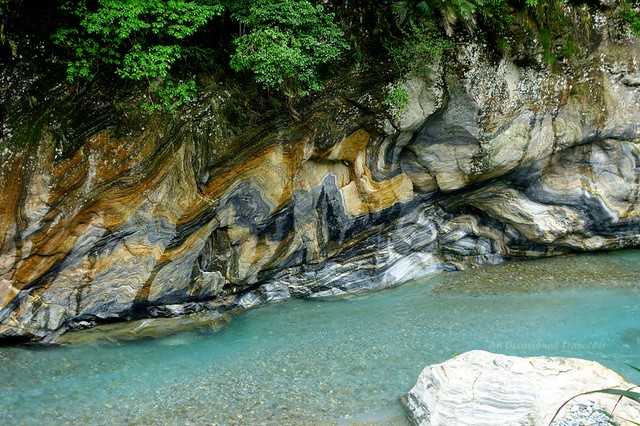 For those observant enough, one can also catch sight of wildlife on the trail. 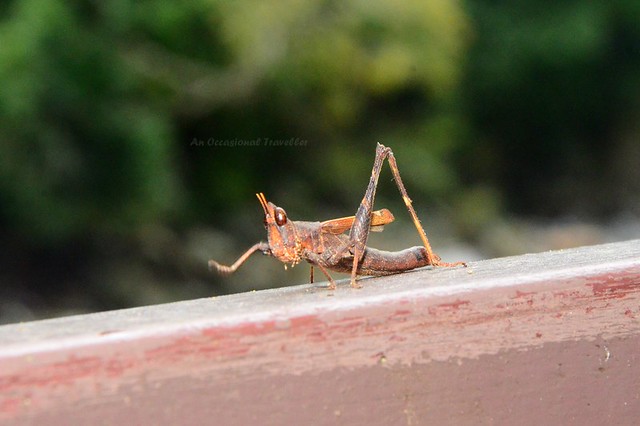 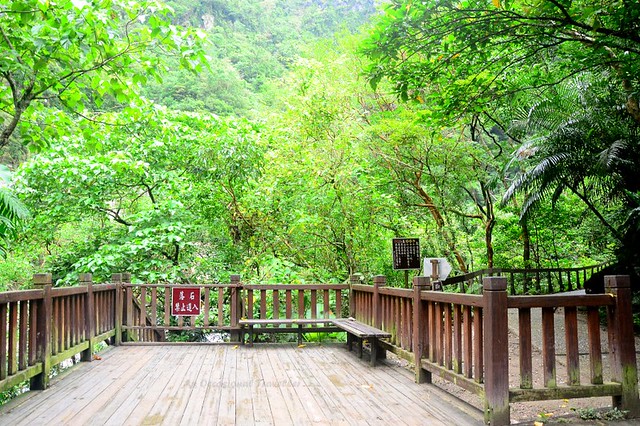 Next we visited the Buluowan Recreation Area.  Buluowan means the ‘echo of the canyon’ used to be the village of the Truku tribe.  Today it houses the Tourist Center of Taroko National Park where visitors can get view a multimedia presentation on the history and culture of the Truku tribe.  Visitors can also look at exhibitions of their culture, arts and crafts at the museum. 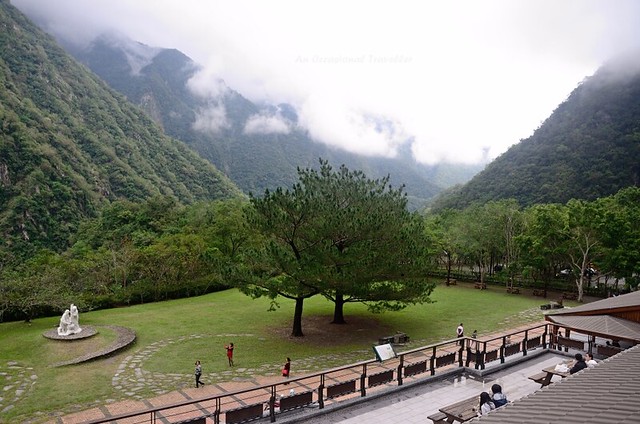 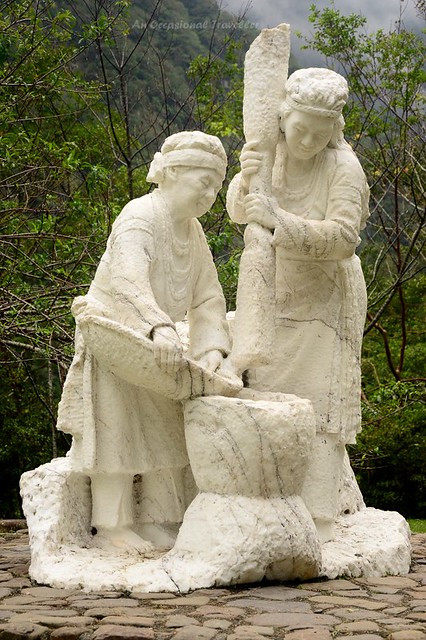 Statue of the Truku tribe

Our next stop is the famous and very popular spot, the Swallow Grotto (燕子口).  Almost all visitors will walk this easy trail that is only 1.4km long.  This is a must stop for the tour buses, so try to visit this spot early to avoid the crowd.

Along the way, we passed by a suspension bridge which leads to the Zhuilu Old Trail (錐麓古道).  However an entry permit is required which can be obtained from Taroko National Park at least 10 days prior. 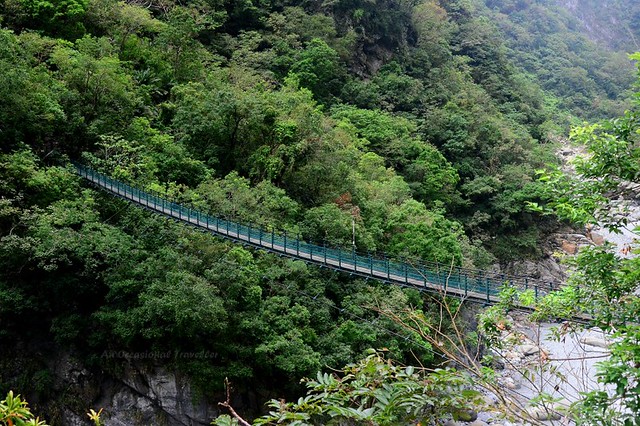 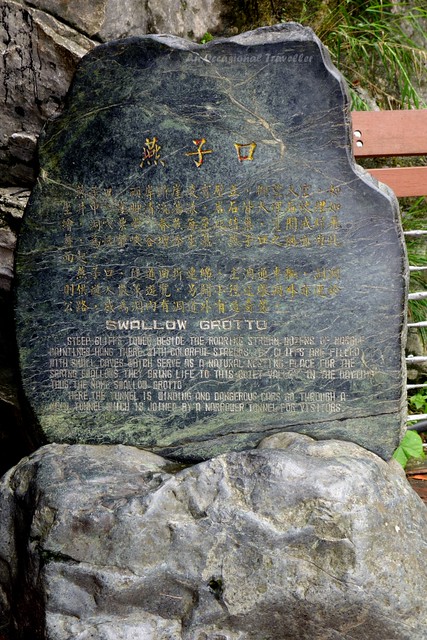 A stone sign marking the entrance to Swallow Grotto

A helmet which is provided free of charge by the park is required for the trail to protect from falling rocks or dripping water from the cliff as one walks through them. 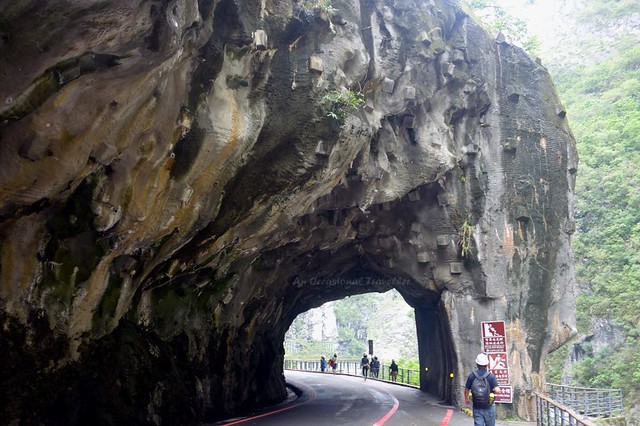 An elephant trunk look alike rock at the trail 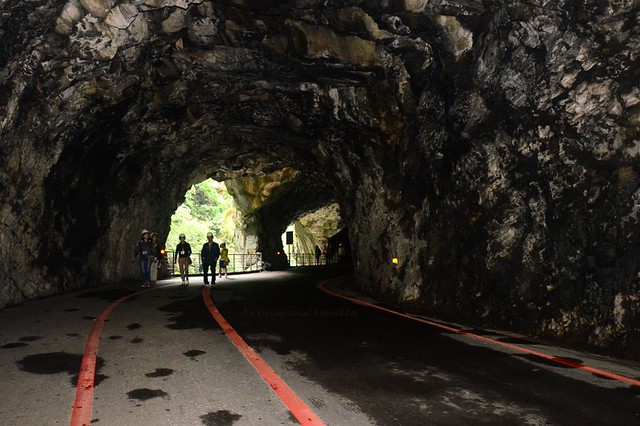 Rock tunnel part of the trail

Highlights of the trail are the cliff with its countless tiny holes and the marble like rock formation.  The holes were carved out by the Liwu River that flows beneath as well as long term erosion from to underground water.  These holes made for perfect nesting place for swifts and swallows especially during Spring and Summer. 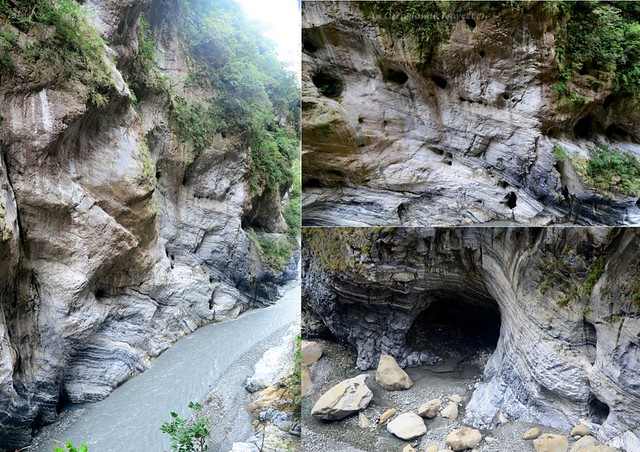 At the end of the trail, we were greeted by the famous ‘Red Indian’ rock formation. 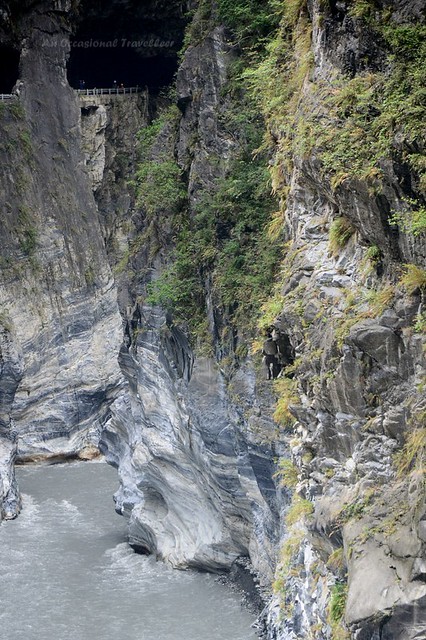 Can you see the Red Indian?

After the short hike, we continued our way towards Cimu Bridge  (慈母桥) or Bridge of Motherly Devotion.  The huge red bridge was built by former President Chiang Jing-guo in memory of his mother, First Lady Soong May-ling. 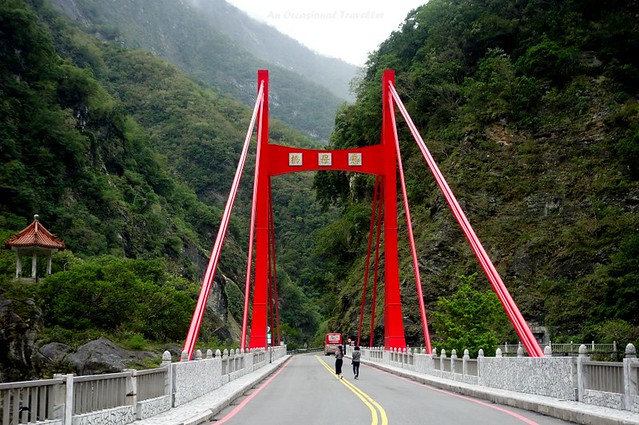 An interesting rock in the shape of a frog can be seen beneath the bridge and below it are massive boulders that look like marble stones. 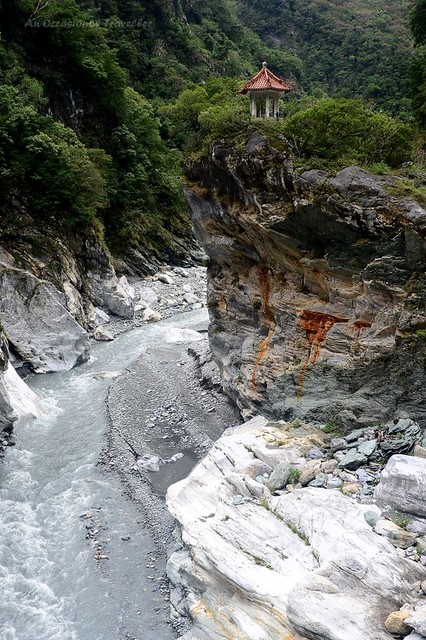 The ‘Frog Prince’ rock with the pavilion as its crown 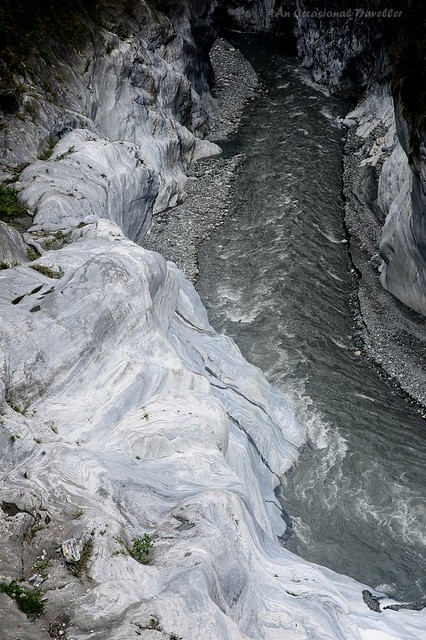 Rain came just as we were having lunch at Tianxiang but that did not deter us from hiking up Xiangde Temple (祥德寺) to see the white Goddess of Mercy (观音菩萨) and the seven-storey Tianfeng Pagoda (天峰塔).  We were not able to ascend the pagoda as it was closed. 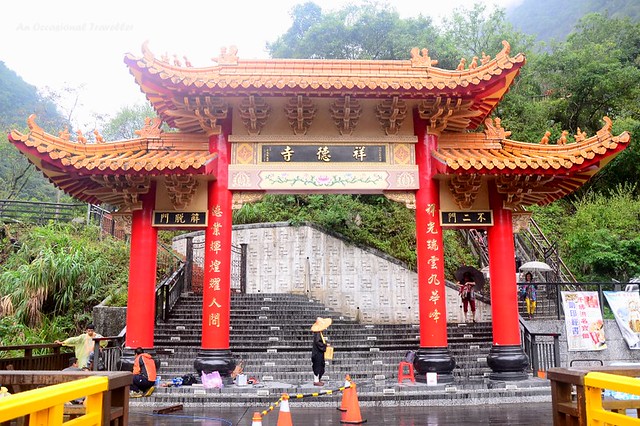 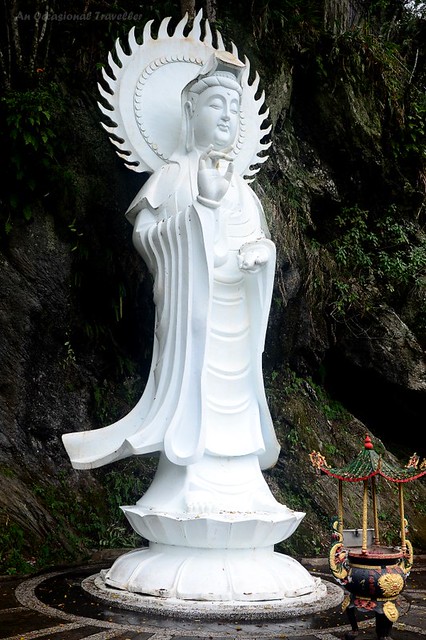 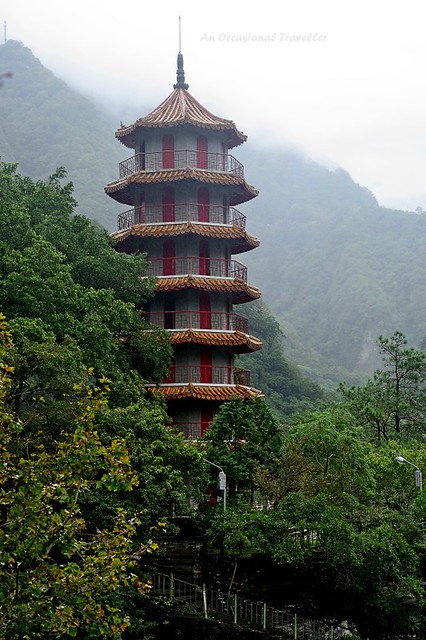 After exploring the temple grounds and offering a prayer at the main temple, we made our way back to town. 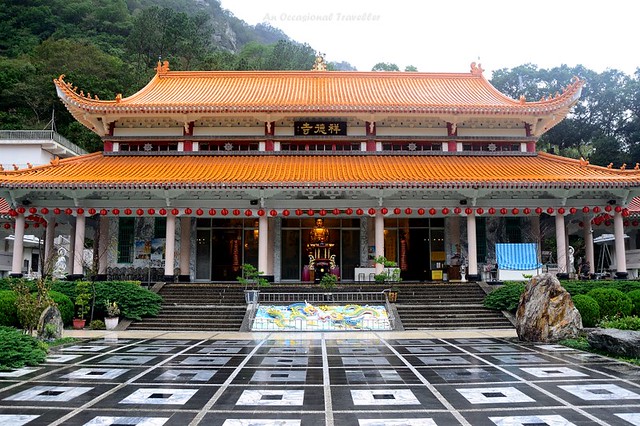 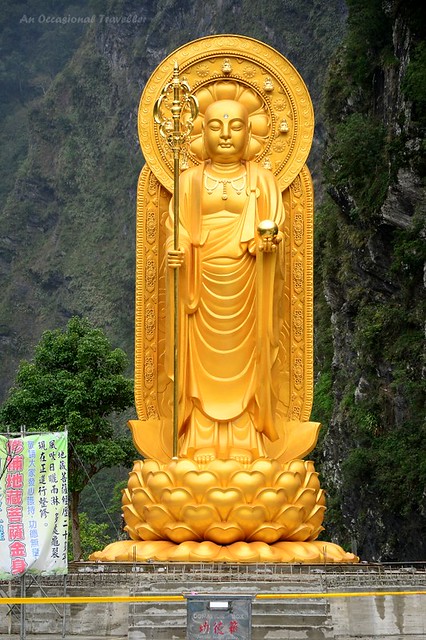 A Buddha statue near the main temple

Rain was quite heavy then so we decided to skip Baiyang Trail (白楊步道) and made our way back to The Eternal Spring Shrine (長春祠).  However the road leading to the shrine was jammed with tour buses.  As it was still raining, we decided to head back to Hualien instead.

Our final stop of the day was Qixingtan Beach (七星潭).  The beach overlooking the great Pacific Ocean is said to be one of the most beautiful beaches in Taiwan.  Early risers come to the beach to catch the first ray of the sun. 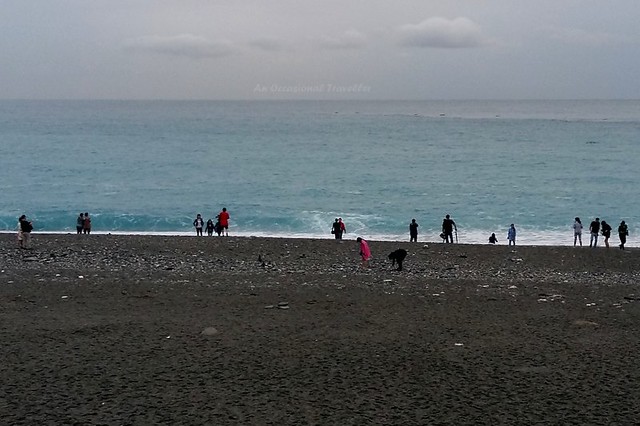 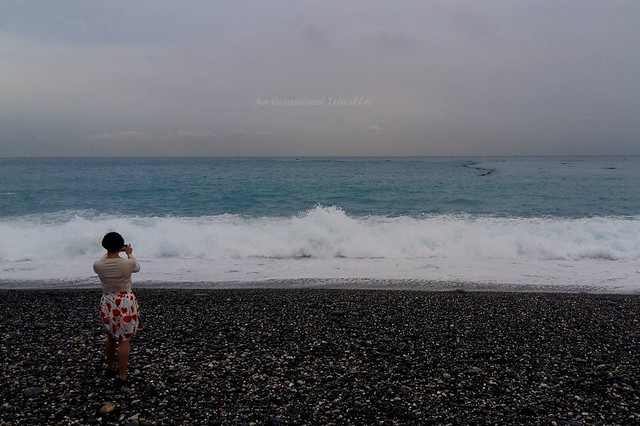 One unique feature of Qixingtan Beach is that its beach is filled with beautiful black pebbles instead of sand. 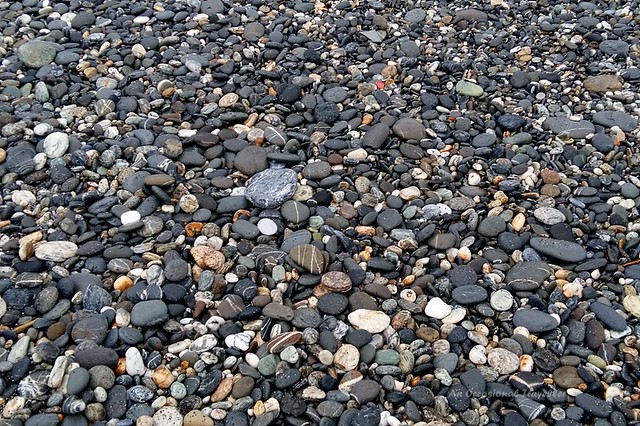 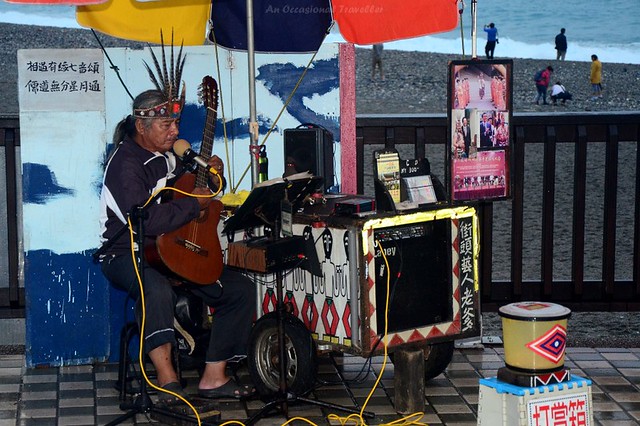 A Taiwan aborigine street performer entertaining visitors to the beach

We left after about 20 minutes to make our way back to Hualien for dinner.

Though the weather wasn’t bright and sunny and we didn’t manage to complete our itinerary, I still had a great time at Taroko Gorge. For visitors to Taiwan, I do recommend a visit to this beautiful park.