Nagoya (名古屋市) is the third largest city and the fourth most populous city in Japan.  This industrial city on the island of Honshu is often overlooked by tourists to Japan.  It’s usually used as a short stopover destination before moving on to another destination.

However, Nagoya is a popular base during the Formula 1 Japanese Grand Prix in October every year.  That was the reason I first visited Nagoya in 2011.  Thanks to AirAsia X, I visited Nagoya for the second time recently.

I managed to spend more time sightseeing.  Nagoya has enough attractions to keep a visitor busy for a couple of days ranging from museums, temples and shrines to family attractions such as aquariums and amusement parks.

I visited three very different temples and shrines during my trip :

This popular Buddhist temple is easily reached via subway.  It’s only a short walk from the Osu Kannon station.  Though not a big temple, it is one of the most important temples in Nagoya as it houses over 15,000 classic Japanese and Chinese texts in its library. 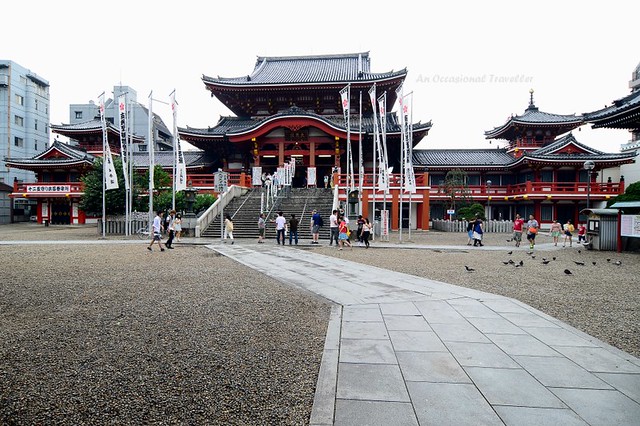 The original temple was completely destroyed in a fire and the current structure was reconstructed in the 1970s.  A wooden statue of the Goddess of Mercy sits in the main hall of the temple. 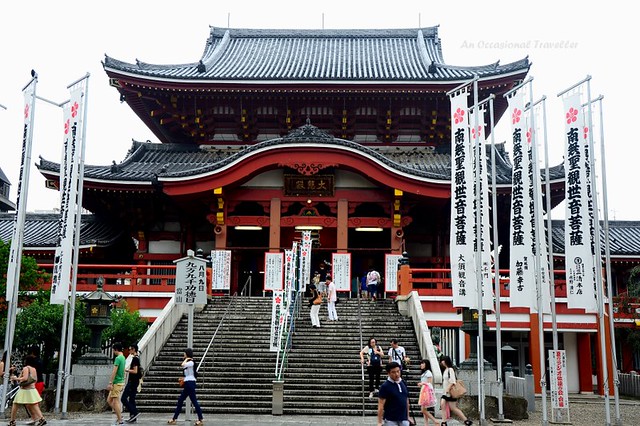 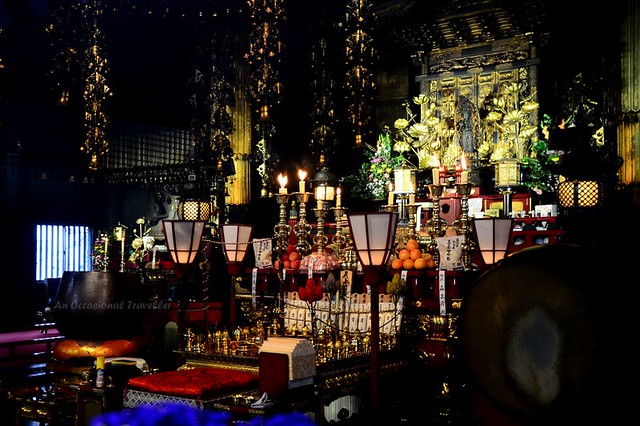 The altar with a statue of Goddess of Mercy

Though this is a popular temple, I was surprised that there weren’t a lot of tourists when we visited on a late Saturday afternoon.

After a short stay at the temple, we proceed to do some window shopping in the Osu Shopping Arcade which is located next to the temple.  One can spend hours in this covered shopping street that is about 750m long and has over 400 shops and restaurants. 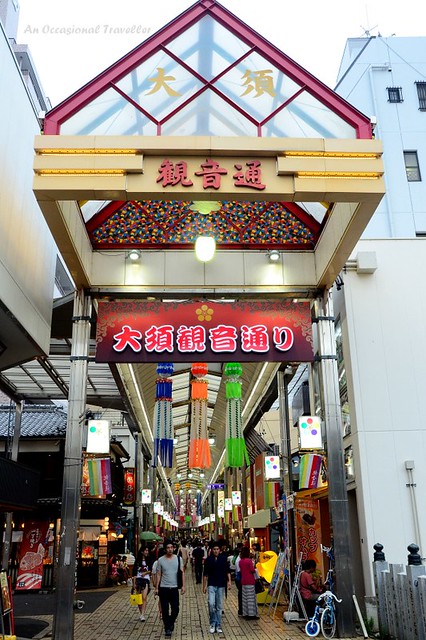 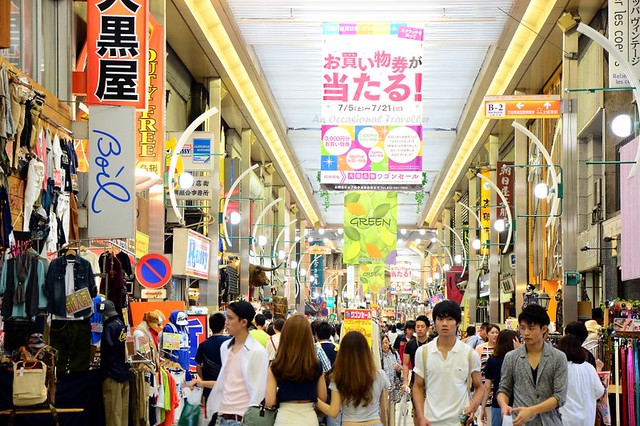 Shoppers inside the covered shopping street

As Atsuta Shrine is listed as one of the most important Shinto’s shrines, I just had to visit it.  The shrine houses the sacred sword, Kusanagi which made up one of the Three Sacred Imperial Treasures. 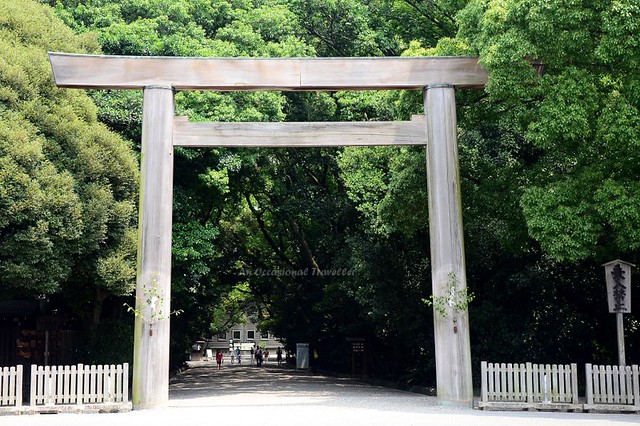 Torii at the entrance of Atsuta Shrine

Similar to Meiji Shrine in Tokyo, Atsuta Shrine complex is located in the middle of a lush green park.  It consists of prayers halls, a treasure house, administrative office and restaurants. 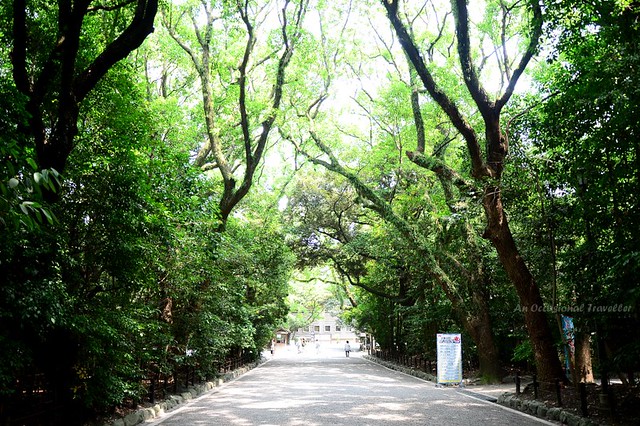 Actually I enjoyed the walk in the park towards the shrine as well as the vast temple grounds more than the shrine itself! 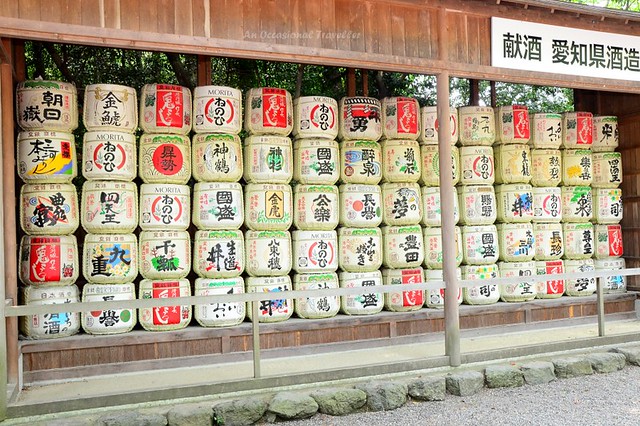 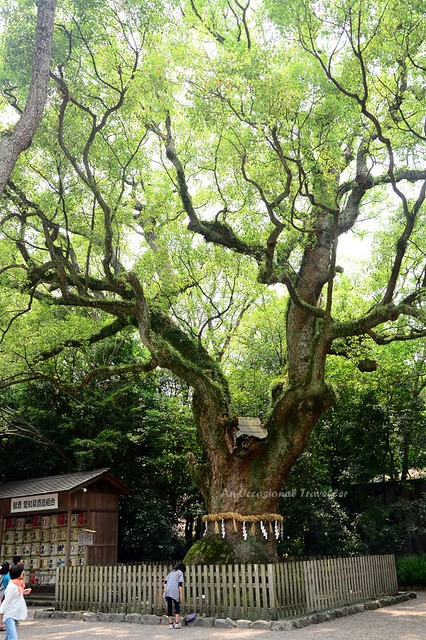 An old wishing tree in the temple grounds

As this shrine attracts 9 million visitors annually, it was not surprising to see quite a number of worshippers offering prayers at the main prayer hall during our visit.  A ceremony was also in progress while we were there. 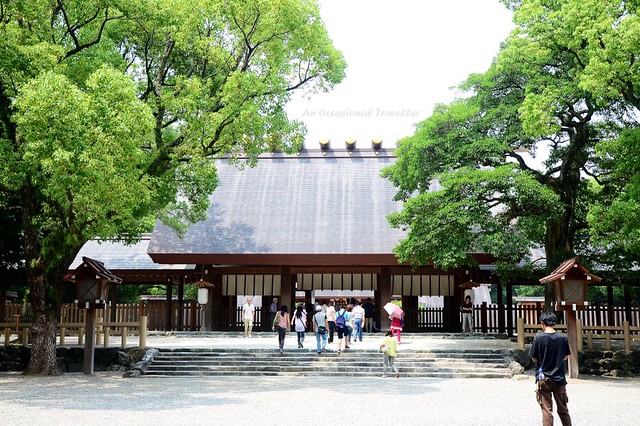 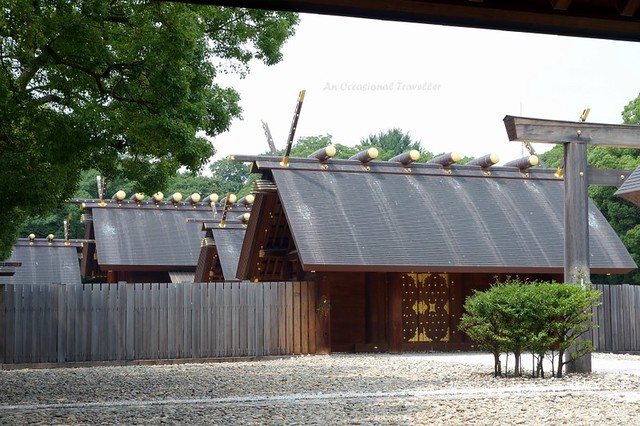 This is what one can see from the main hall………….can’t even see the altar 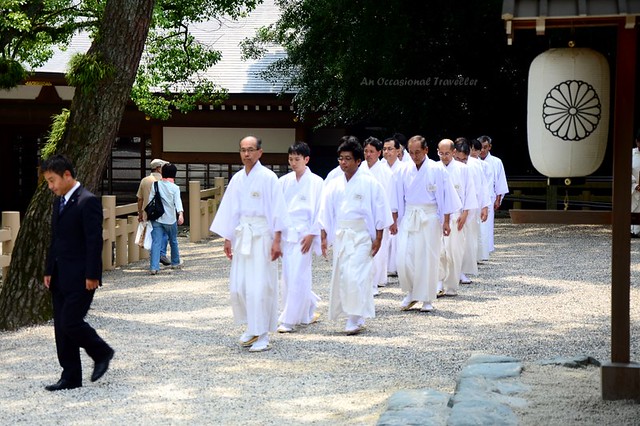 I came across this temple while researching for my trip.  This temple is often overlooked although it’s an important sacred place of worship for Buddhists for it’s the repository for some of the thumb bones of Buddha. 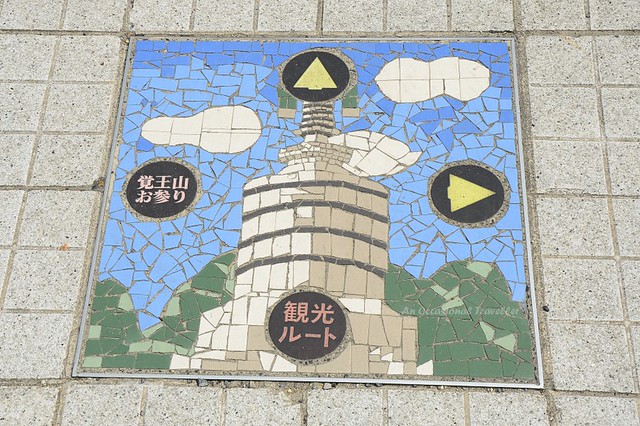 Colourful tiles on the pavement giving directions to the temple

Nittaiji which means ‘Japan Thailand Temple’ is a relatively new temple.  The temple was built in 1904 to enshrine the Buddha’s bones that were donated to Japan by King Chulalongkorn. 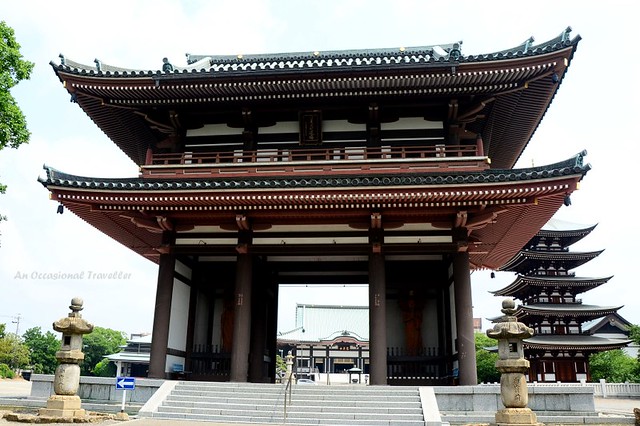 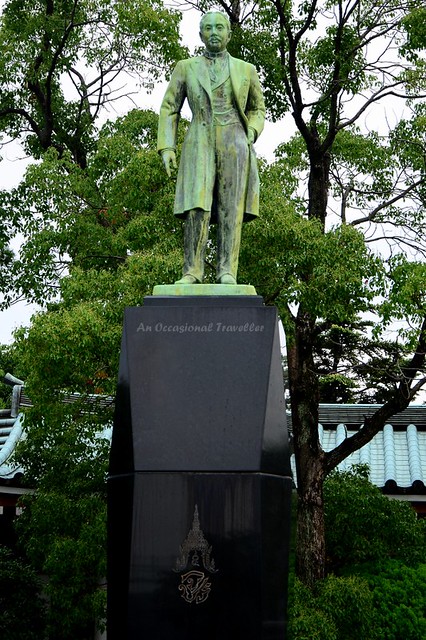 Statue of King Chulalongkorn in the temple grounds

When we visited, we literally had the whole temple to ourselves.  It was so calm and serene.  The temple grounds contain a 5-storey pagoda and the main building. 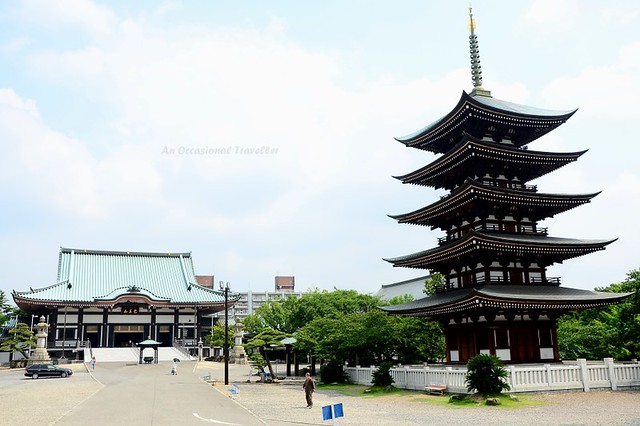 The main building was rebuilt in 1984 and houses a golden Buddha statue donated by King Bhumibol Adulyadej.  The tablet above the statue is inscribed with the word ‘Buddha Sakyamuni’ by the King himself in gold leaf. 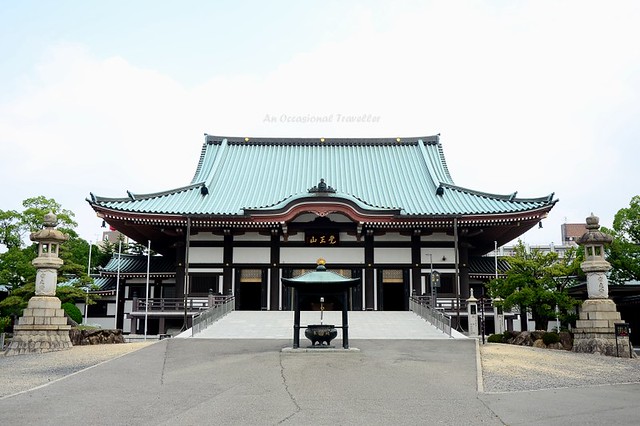 The main building which was rebuilt in 1984 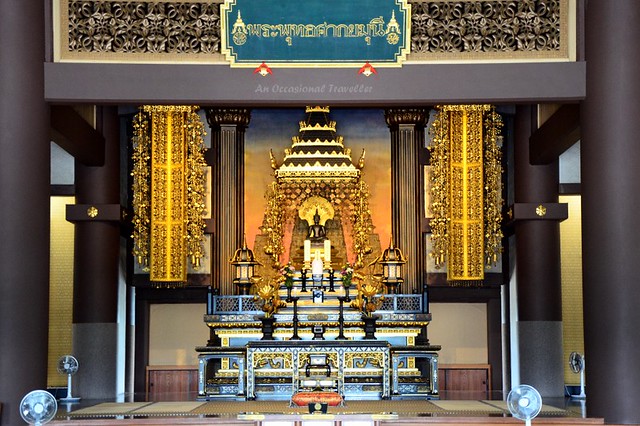 Altar with the gold Buddha statue inside the main building

The Buddha’s bones are actually housed in another location which is about 10 – 15 minute walk away.  The bones are enshrined in a 15-metres high granite stone stupa called the ‘Hoanto’. 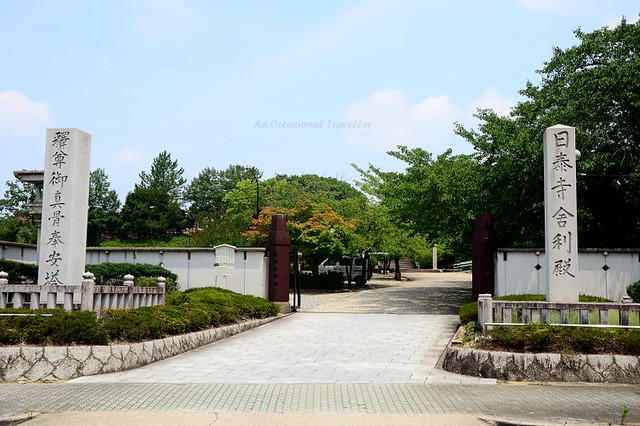 However what we saw that day was only the base of it as the gate to the stupa is only opened a few days a year during special events.  Oh well, at least I pay homage to Buddha albeit from afar 🙂 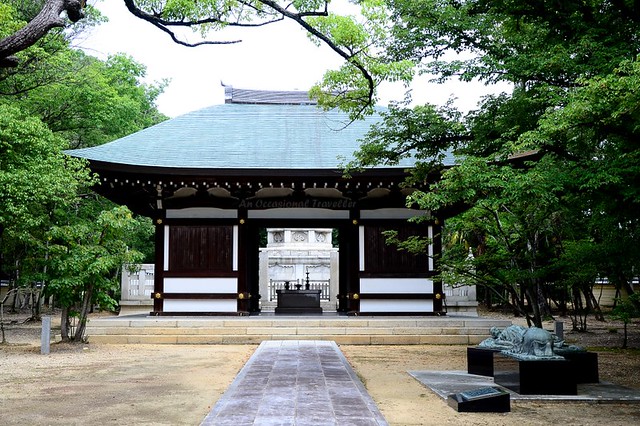