Nice is a city in southern France on the Mediterranean coast. The city is nicknamed Nice la Belle, which means Nice the Beautiful. It is the largest city of the French Riviera (Cote d’Azur).  Due to its location on the Mediterranean Sea, Nice is a popular tourist attraction especially during the summer. 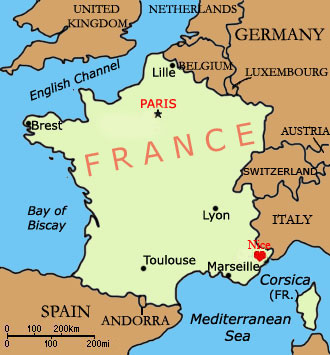 Nice is located in South of France

The best way to explore the main attractions of the city is by walking.  We started our exploration of the city from our hotel near the train station, Gare De Nice Ville.  The first tourist attraction we saw was The Basilica of Notre Dame de Nice.  However it wasn’t open, so didn’t get to take a look inside this Gothic style cathedral that was built around 1868. 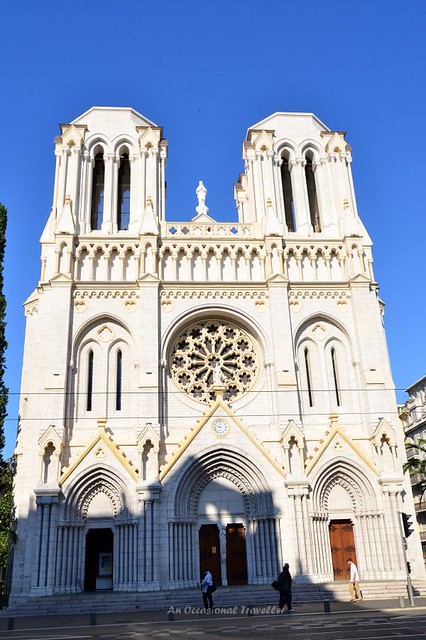 We continued our way towards Cours Saleya or Flower Market which is located in Vieux Nice or the Old Nice.  This historical district of Nice also houses Opera de Nice (Nice Opera House).  It doesn’t only host opera performances but also ballets and music concerts. 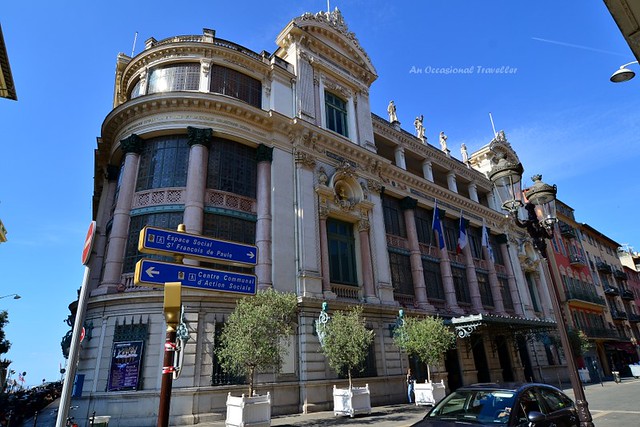 Cours Saleya is only a few minutes away from the opera house.  This pedestrian street market operates six days a week, Tuesday to Sunday.  Here one can find a myriad of colourful flowers – roses, mimosas, tulips, sunflowers at one end of the market and a variety of food – fresh vegetables and fruits, exotic spices, home-made olives oil and jams at another end. 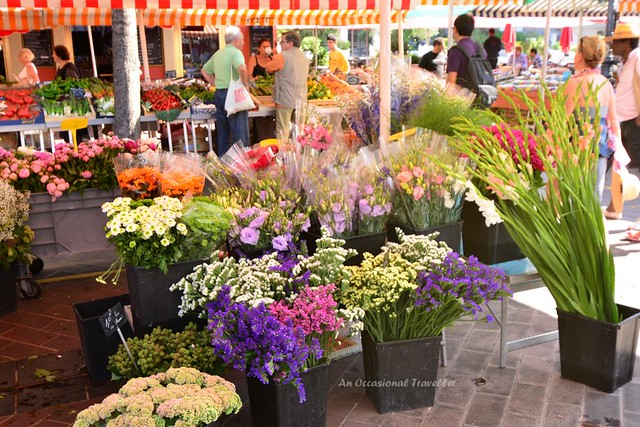 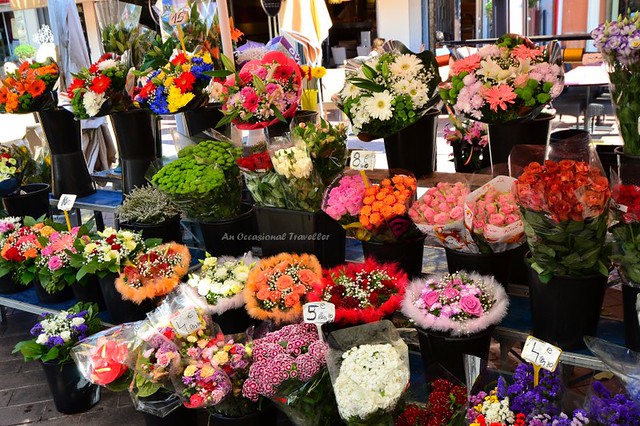 A variety of flowers can be found at Cours Saleya

At the end of the market stands the Chapelle de la Tres Sainte Trinite e du Saint Suaire (Chapel of the Holy Trinity and of the Holy Shroud).  This chapel built between 1657 and 1660 is to commemorate the Holy Shroud stopover in Nice on its way to Turin. 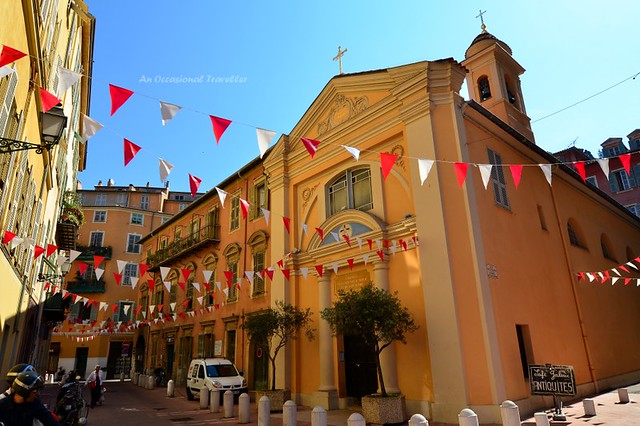 From Cours Saleya we walked towards the famed Promenade des Anglais.  This long wide walkway faces the Mediterranean Sea are lined with cafes, shops and landmark hotels such as Hotel Negresco.  This famous hotel was built by Henri Negresco in 1912 as a hotel to attract the world’s wealthiest as its clientele.  It served as a hospital during World War I. 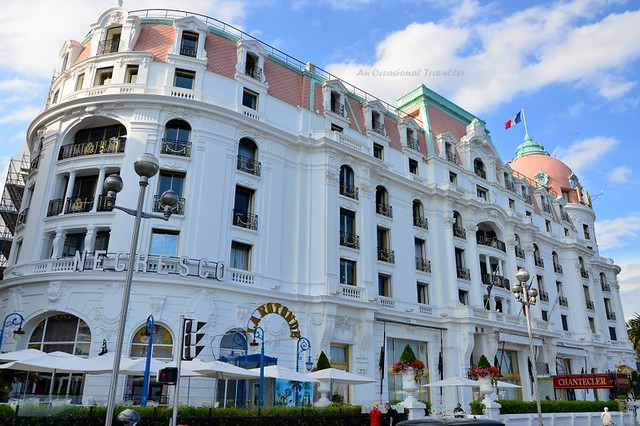 The beach at the promenade is also popular with beach goers and sun worshippers especially during the summer. 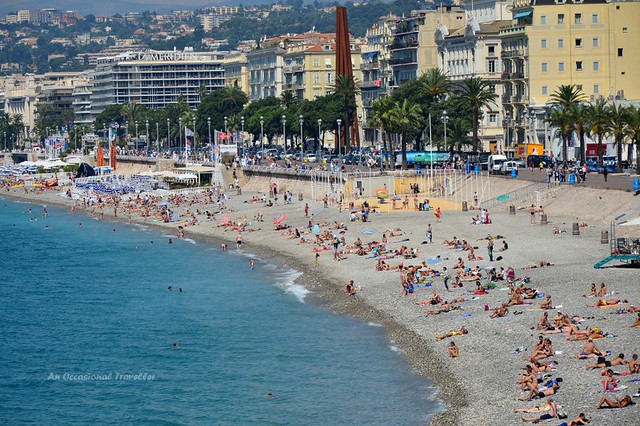 We strolled along the promenade towards Hotel Suisse to take the escalator up to Colline du Chateau (Castle Hill), the site of the original city.  There is a nice park to stroll or have a picnic up the hill.  Families can bring their kids to the playgrounds in the park too. 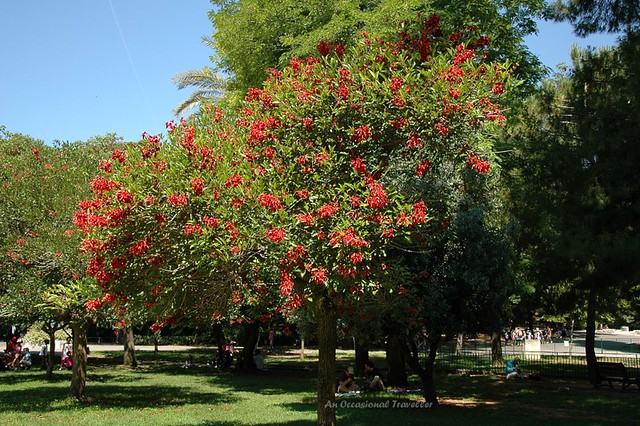 The hill offers magnificent view of the promenade and its coastline, the city of Nice as well as Port de Nice (Port of Nice). 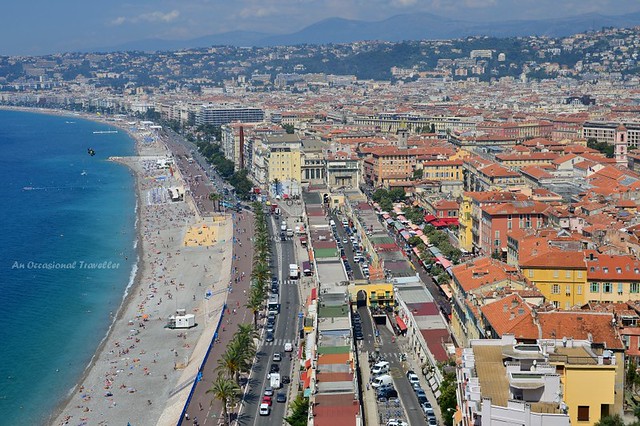 View of Nice from Castle Hill 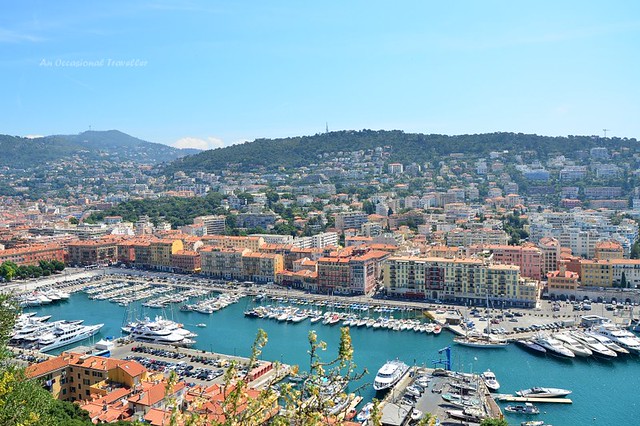 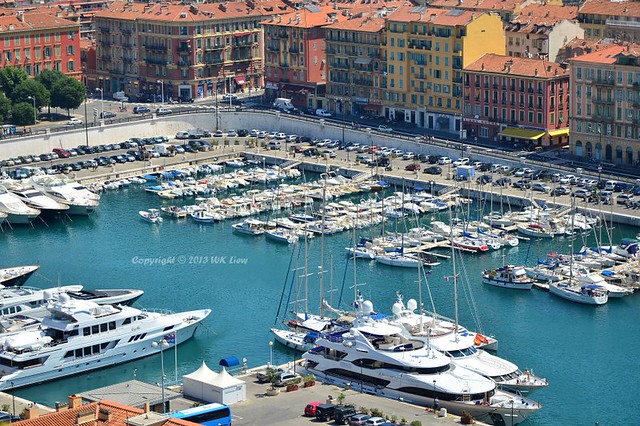 One can still see ruins of the old city and the waterfall, which was once the source of water supply for the entire town. 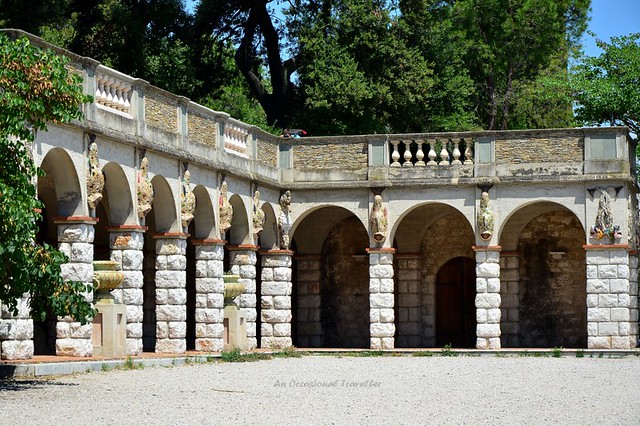 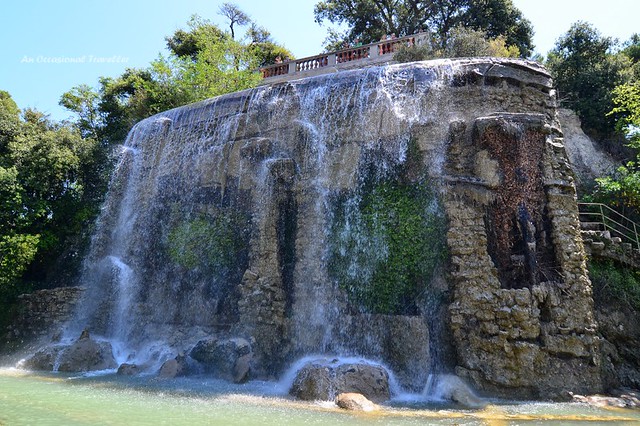 We descended the hill towards the port and we stumbled upon the Monument aux Morts (Monument to the Dead).  This war memorial monument was built between 1924 – 1928 to honour the 3,665 soldiers from Nice who perished during World War I. 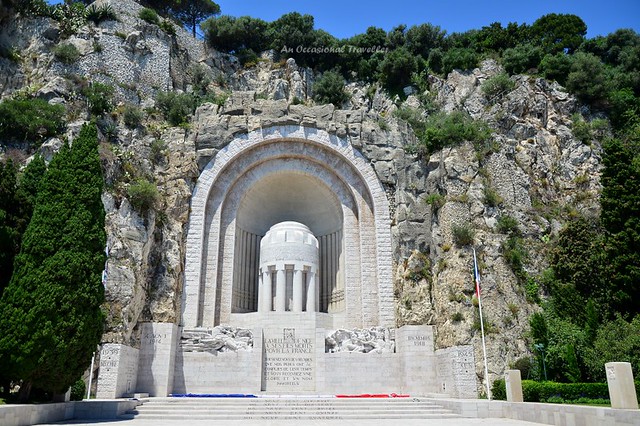 At the monument we saw this mini-train ferrying tourists through the sights of Nice.  This is a good option for those who are short of time or too lazy to walk. 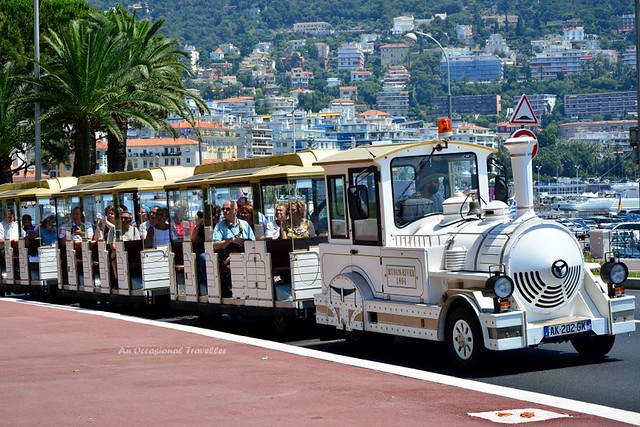 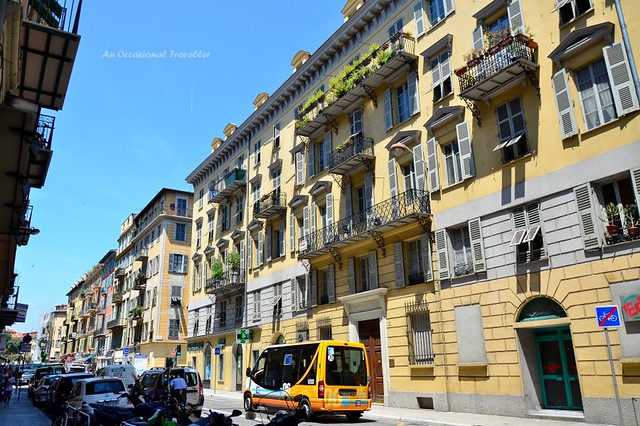 From the old town, we headed towards Place Garibaldi or Garibaldi Square.  This spacious square with buildings in Baroque style dates back to the 18th century.  It is named after Giuseppe Garibaldi who was responsible for unifying Italy.  A statue of Garibaldi can be found at the centre of the square. 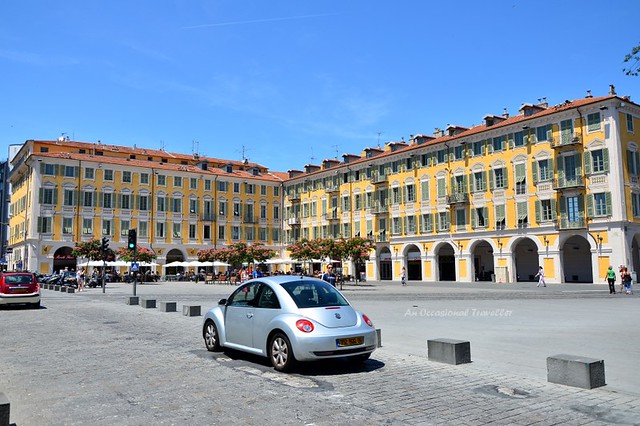 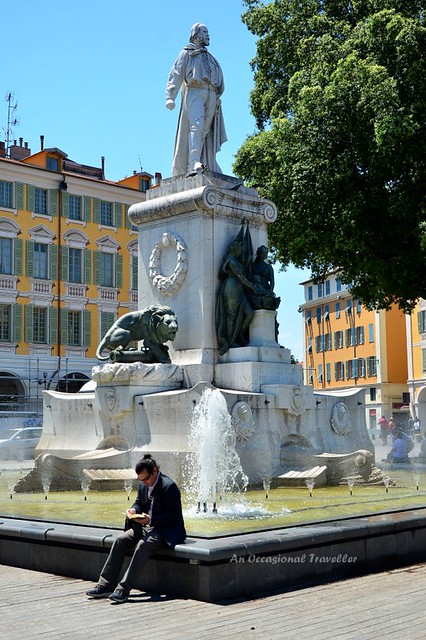 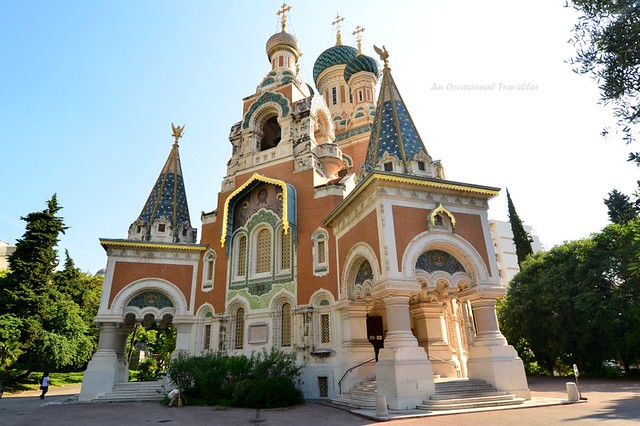 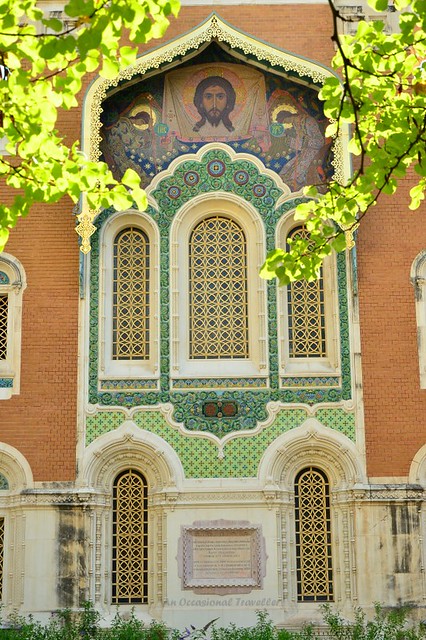