Started day 2 with a bus ride on Bus #100 from Kyoto Station to Ginkakuji Temple.

Bus fare is ¥220 –  ICOCA card not accepted in the bus.  Queue was quite long but it moved along rather fast.  Bus was packed when it left the station. 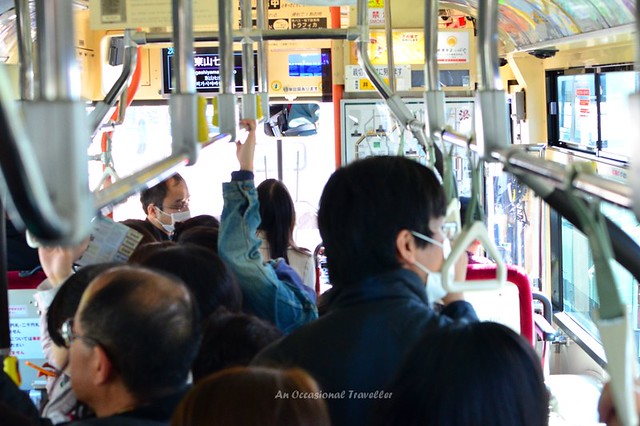 Ginkakuji or Silver Pavilion (銀閣寺) was built in 1482 as a retirement villa by shogun Ashikaga Yoshimasa.  After his death, the  villa was converted into a Zen temple. 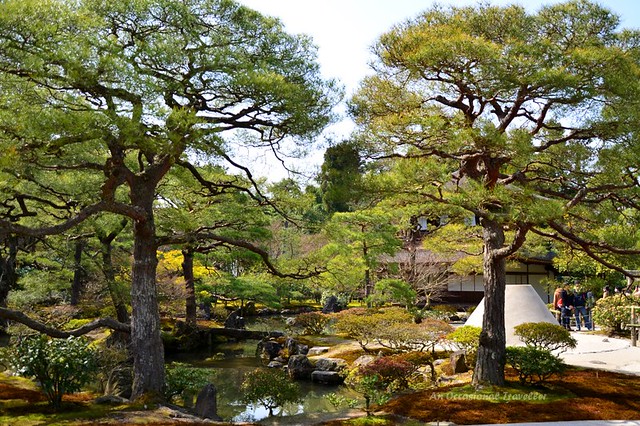 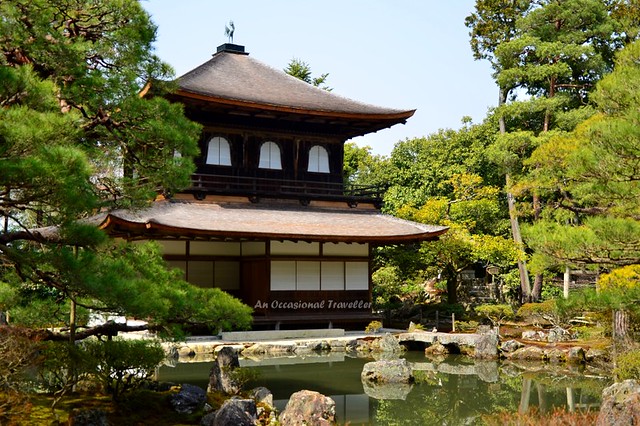 The 2-storey Silver Pavilion in Ginkakuji

We then walked on the Philosopher’s Path towards Nanzenji. 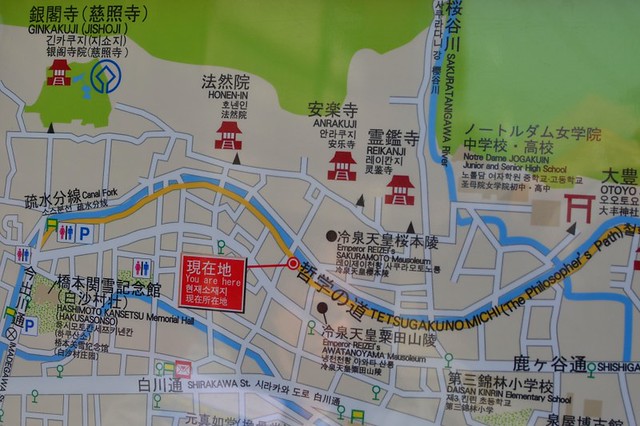 It was a pleasant stroll with cherry trees lining the path.  Along the way, we passed a few other temples.  Kyoto is not only the land of geisha but also the land of shrines & temples!!! 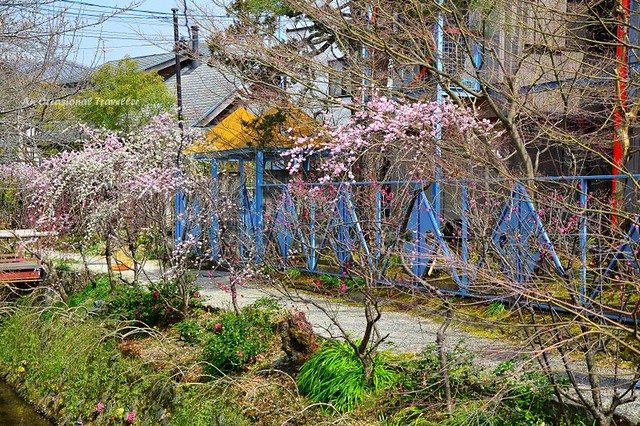 Cherry blossom at its early stage 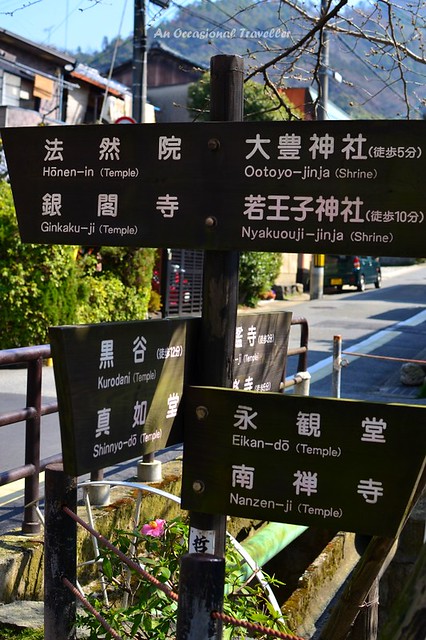 Temples along the Philosopher’s Path

Nanzenji is one of the most important Zen temples in Japan.  The temple has vast grounds.  We just stroll around the temple ground and the aqueduct. 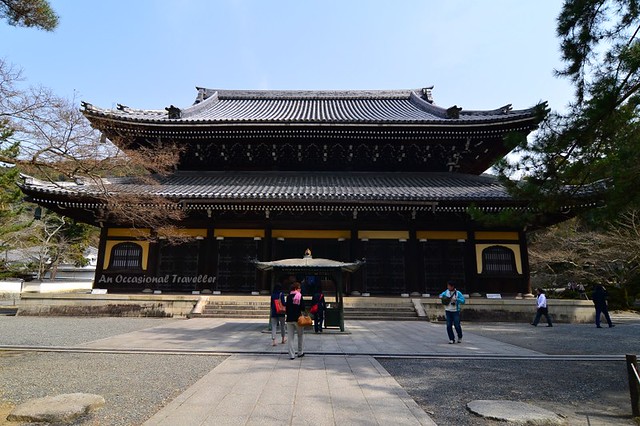 The large brick aqueduct that passes through the temple grounds was part of a canal system that was constructed to carry water and goods between Kyoto and Lake Biwa. 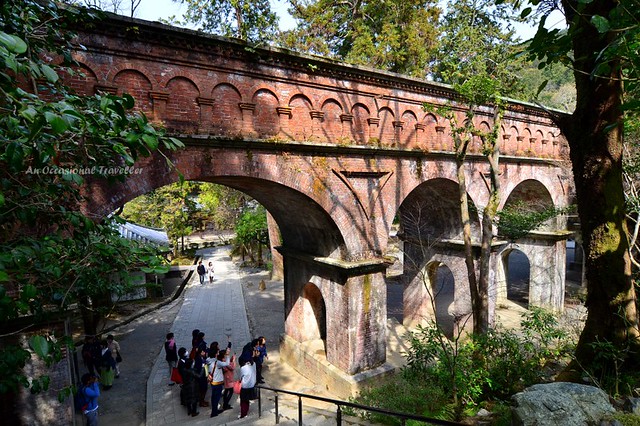 The brick aqueduct at Nanzenji Temple

Then we continued walking towards Kiyomizudera Temple.  We passed by Chionin Temple and just had a brief stop to look around before continuing on our way. 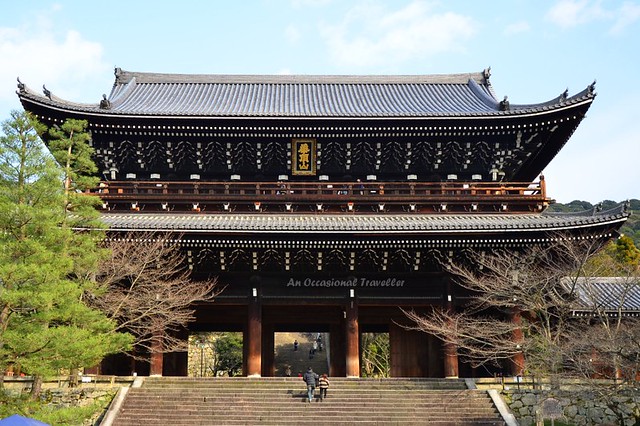 A sideshow at the temple grabbed my attention – hey, its the Tesla EV! 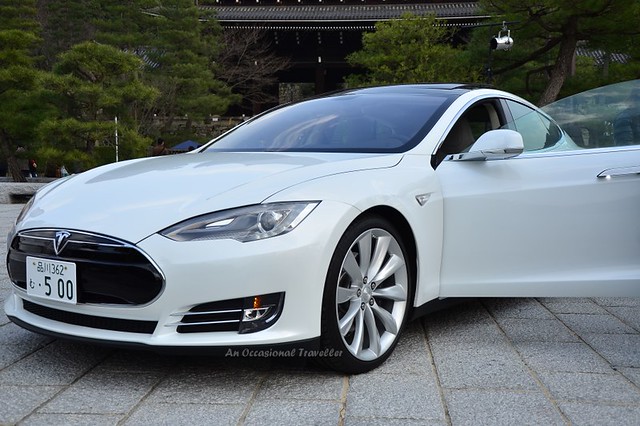 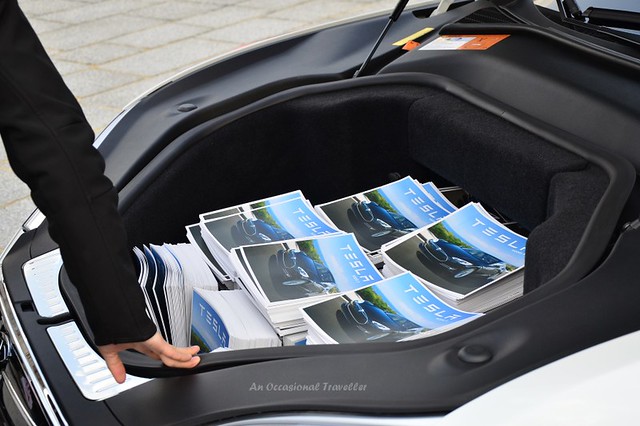 As we neared Kiyomizudera, we managed to see 2 geishas on a rickshaw. 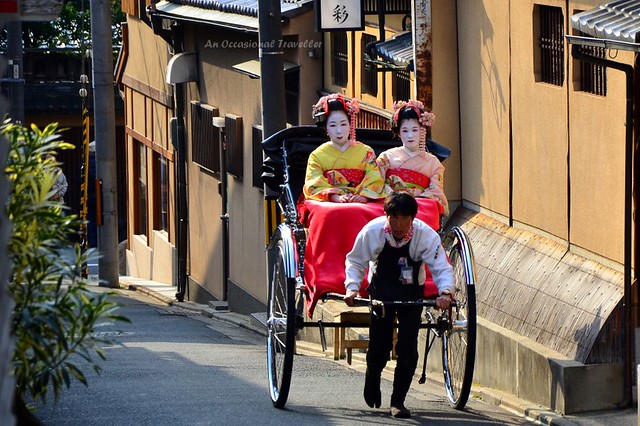 So excited to see them! 🙂

As we turned the corner, we saw some others coming out of a small shrine!   Seeing the geishas was the day’s highlight. 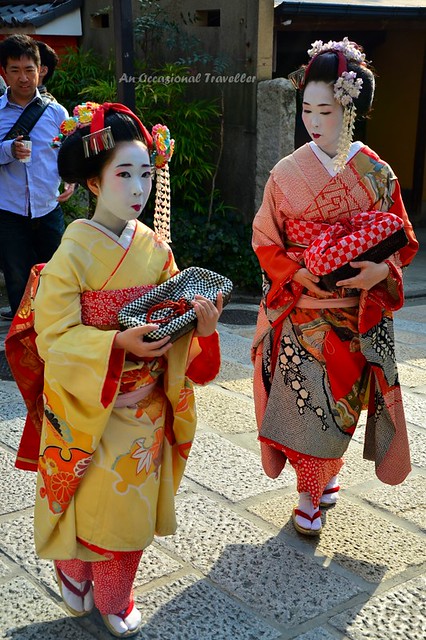 We arrived at Kiyomizudera around 4.45pm and tried to buy tickets for the  temple.  Was informed that the evening illumination entrance ticket has to be  bought separately and they are sold by the organizer of the  illumination  event.  The temple closed earlier at 5.30pm before re-opening at 6.30pm for the  evening event.  Decided it was better to wait for the evening  event. 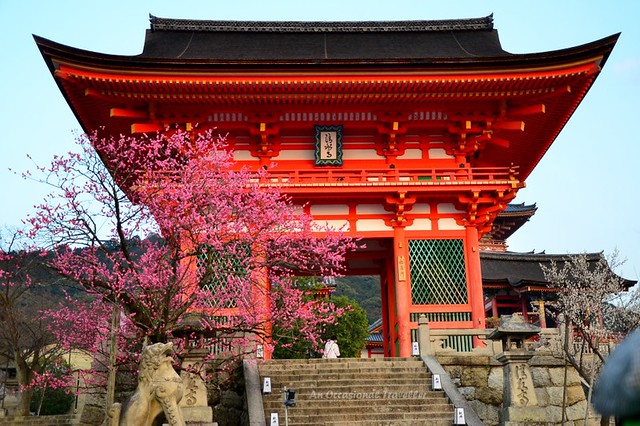 The Deva gate entrance to Kiyomizudera 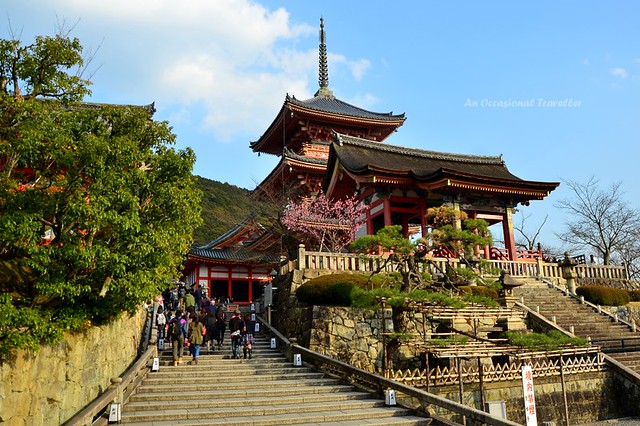 While waiting, we browsed the many shops near the temple. 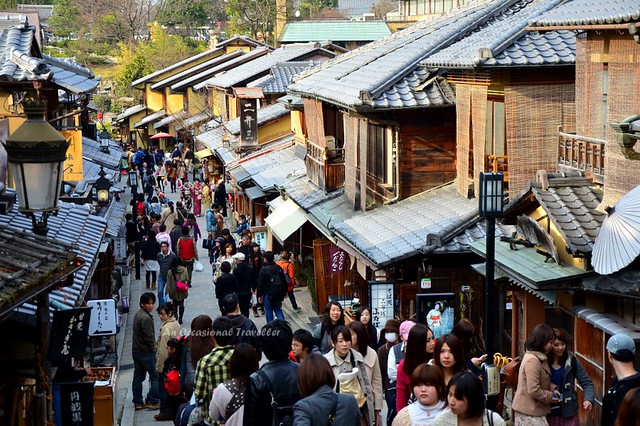 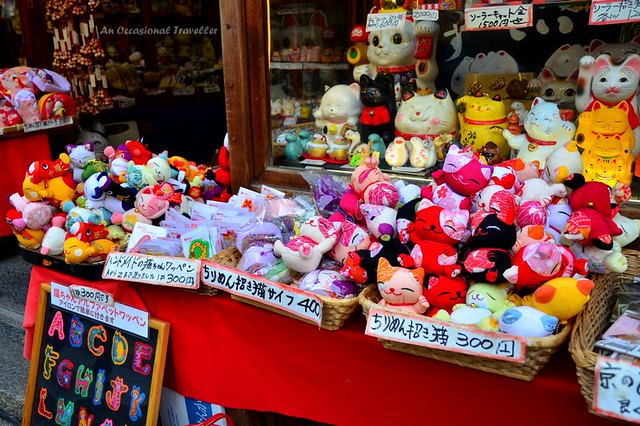 The entrance fee for the evening illumination event was ¥400. The crowd  waited patiently in the sunset for the ticket counters to open. 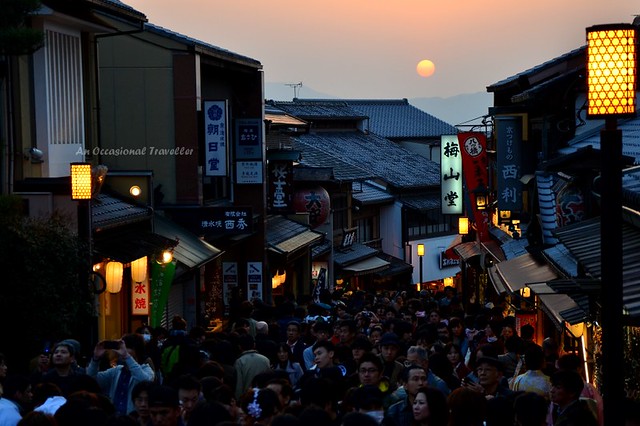 It was well worth the wait as it was really quite a sight to see the temple  and the grounds lighted up. 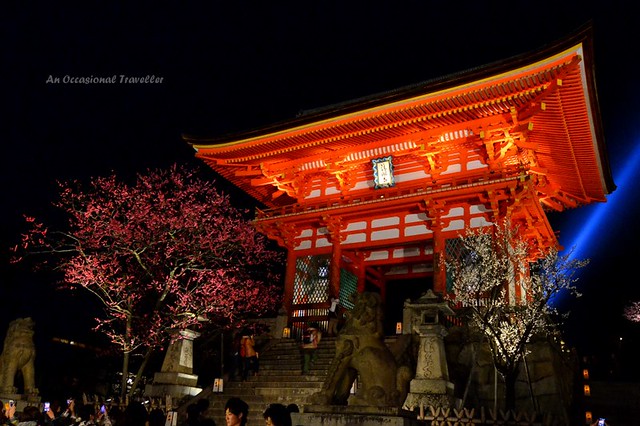 The Main Hall (Hondo), Kiyomizu Stage and the 3 storied pagoda lighted up.  The stage was filled with tourists for the illumination event. 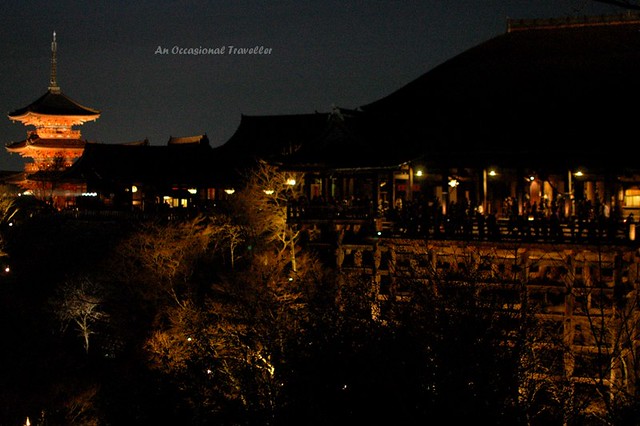 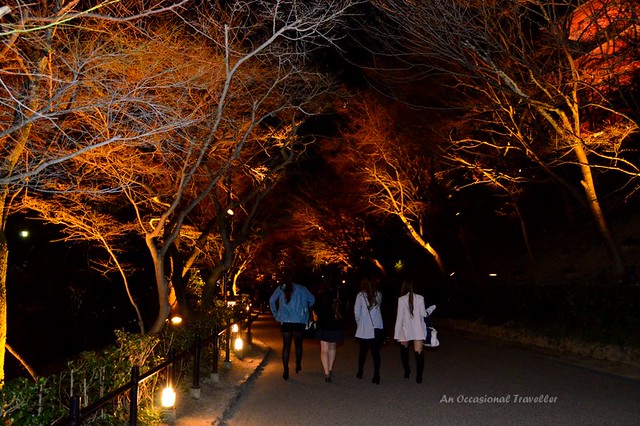 The temple grounds and trees being illuminated